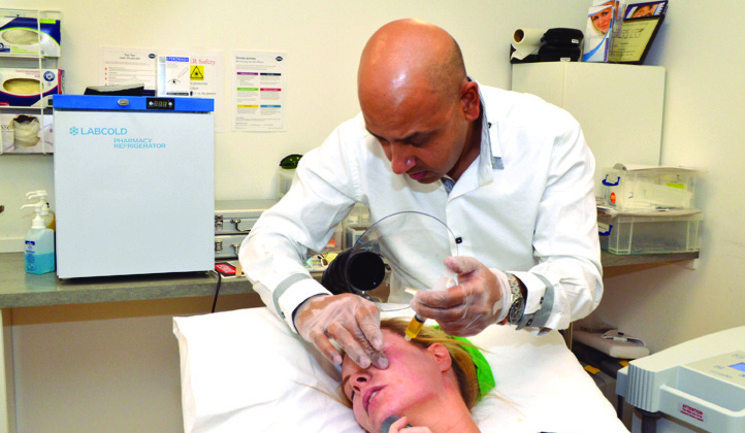 Platelet Rich Plasma, or PRP as it is more commonly known, has been used increasingly in aesthetic medicine for the past few years. There are several ways of extracting platelets and many manufacturers produce kits to ease their harvesting for delivery into tissues. When activated, platelets release growth factors, which aid the repair and regeneration of tissues, supporting a range of aesthetic indications. PRP’s role in aesthetic treatments is continuously evolving, and while there is evidence to suggest that it will improve outcomes, there are, however, several controversies regarding its use in aesthetics.

An introduction to PRP

Platelets are formed in bone marrow as fragments of megakaryocytes. Platelets form one of the cellular components of blood within the plasma – the other cellular components include red blood cells and white blood cells. Plasma also has an acellular component, in which there are plasma proteins (albumin, globulins and fibrinogen), salts (electrolytes), water, glucose, clotting factors, hormones, and dissolved gasses. The theory is, by placing platelets in tissues that require repair and regeneration, the cascade of events that result from platelet activation and degranulation will lead to the repair and regeneration of these tissues. Aged tissues may also be rejuvenated as part of this process. Platelets need to be activated for them to release the growth factors contained within them, and this occurs when platelets are removed from their usual surroundings in an intact blood vessel. The endothelial lining of a blood vessel releases substances that inhibit platelet degranulation. Activation can be augmented by salts such as calcium chloride, or by thrombin. The release of growth factors leads to a cascade of events involved in acute inflammation, repair and regeneration.
Growth factors within platelets include: PDGF (Platelet Derived Growth Factor), TGF-beta (Transforming Growth Factor Beta), FGF (Fibroblast Growth Factor), IGFs (Insulin-like Growth Factor types 1 and 2), VEGF (Vascular Endothelial Growth Factor), EGF (Epidermal Growth Factor), Interleukins, KGF (Keratinocyte Growth Factor), connective tissue growth factor, along with, possibly, many others.

The background to PRP

Many treatments that we use in aesthetic medicine have a background in reconstructive plastic surgery. PRP is no different. I first used it in a study setting in 2005, as part of a head and neck cancer reconstruction, following osteoradionecrosis.
I subsequently used PRP in aesthetic surgery in 2007 for reducing complications, wound pain, and seroma rates following abdominoplasty. PRP also has a proven background in diabetic foot ulcers and systematic reviews are available on the efficacy and favourable outcomes of PRP in this disease process.1
In these situations, PRP is topically applied to the wound and a dressing is applied; this process is repeated every few days until the wound heals. PRP is, primarily, an advanced wound therapy, known to be beneficial to both acute and chronic wounds.
It emerged into aesthetic medical treatments a few years ago, but has recently become more popular as celebrities undergo treatment and publicise the outcomes. Wound healing has three main phases – inflammation, proliferation and maturation.
The inflammatory phase takes place over the first two days, which is followed by the proliferative phase, taking place over the next few weeks, and the maturation phase, which occurs over the course of approximately 12 months.
While an acute wound heals in the correct order and time expected – a chronic wound fails to heal in an orderly and timely manner. There can be a repeating cycle of inflammation and proliferation, often to the detriment of wound healing, thus it fails to achieve wound closure. PRP reduces pain and infection rates, leading to a more rapid wound closure in acute wounds.2
Although it is advised that wounds should not be closed under tension, in some plastic surgery procedures they are. It is these wounds that are more likely to undergo wound breakdown and loss of epithelialisation, which may benefit from PRP treatment.

Many manufacturers now produce kits that easily permit PRP to be obtained. A blood sample (often approximately 10ml) is withdrawn from the patient and placed in a centrifuge. It is advised that the blood sample needs to be taken gently with a needle of at least 23G in size to avoid damaging platelets. The centrifuge separates the components of whole blood into layers. Often, the kit will contain a separating gel that acts as a barrier between the red cells and the remaining components of plasma.
When red cells are injected into tissues, they create a bruise. Red cells contain haemoglobin and the process by which this is removed may lead to permanent tissue and skin staining, when PRP is injected near the skin. It is therefore exceedingly important to never inject red cells into the skin and subcutaneous region. The centrifuged product contains plasma, white blood cells and platelets. Platelets are concentrated in the buffy layer of the centrifugate near the separating gel. The usual concentration of platelets in the blood is 150-400 billion platelets per litre. Since red blood cells form approximately 45% of the volume of whole blood, the concentration of platelets in centrifuged blood will be approximately 110% higher. Although the bulk of the platelets are located at the buffy coat layer of the centrifugate, many clinicians will gently mix the whole plasma so that the platelet rich layer of plasma mixes with the platelet poor layer of plasma (PPP).
It is worth noting that even if the PRP layer alone is used, the PPP component will contain plasma proteins and clotting factors at an increased concentration compared to whole blood, since the volume of the red cells is elimination from whole blood. PPP may also, therefore, support the repair and regeneration of the tissues.

When we look for evidence of efficacy of PRP in aesthetic medicine, there are very few good quality and well-conducted clinical trials that support its use. Where there is evidence, the results and techniques are extrapolated to other clinical areas and indications, weakening the data. In current clinical PRP practice the evidence is anecdotal and from small case series of patients treated by individual clinicians. Despite this, the quality of clinical trials is improving and some indications have a reasonably good standard of evidence behind them.

More recently there have been studies that are either complete or are currently underway, looking at the effect of PRP on different treatments that already exist in aesthetic medicine and surgery.

Ablative CO2 laser treatments have been used in combination with PRP treatments. The ablative nature of the laser means that the epithelial surface is disrupted in order for the CO2 laser to cause thermal effects at the dermal level. Fractionating the CO2 delivery leads to areas of normal tissue in between damaged tissue, aiding a more rapid recovery.

As technology improves with time, new devices with ultrasound technology are now available to deliver topically applied treatments through skin that has been treated with micro ablation. The Alma Pixel CO2 laser for example, is available with an “Impact” head, which is an ultrasound device, which uses sonophoresis to forcibly push the topically applied substance through to the dermis via the epidermal and dermal ablative pores that have been created by the laser. It is therefore possible to perform fractionated laser ablation of the skin, topically apply PRP and then use sonophoresis to deliver mesotherapy products such as PRP. This can be performed without the traditional multiple injection techniques that are required for delivery of PRP into the dermis.

Evidence is beginning to show support for the use of PRP to improve wound healing following ablative laser treatments to the face.3,4 Since PRP already has a proven effect in more rapid and complication free wound healing in acute and chronic wounds, it is not surprising that Laser-PRP, as a combination, seems to have the potential to be more beneficial than either of the two modalities on their own.

ReCell treatment is also known as “spray on skin”. The treatment process involves a small area of skin being removed as a thick split thickness skin graft. The donor site is either left to heal by secondary intention, or the skin is excised to its full depth and the wound closed directly. The amount of skin taken is the approximate size of a postage stamp. Enzymes are used to separate the epidermis from the dermis, and the epidermis is subsequently cut into tiny areas of skin. The skin is placed in a suspension of saline and is sprayed on to a fresh wound bed of dermis, or partial loss epidermis. ReCell is indicated for the treatment of acne scars, stable vitiligo, burns scars, and acute burns where it accelerates wound healing. Currently, the use of ReCell is being studied when used in combination with lipofilling and PRP in the remodelling of burns scars, by Professor Jean-Paul Meningaud in Paris, who presented his initial work at the CCR conference in 2013.6

Fat injections are used for cosmetic and reconstructive purposes to restore volume to depleted areas. In aesthetic surgery, the volume loss in aged tissues is usually in the face, where one of the main hallmarks of ageing is atrophy of the facial fat pads.
Currently, even when using some of the more accepted techniques – considered the best by many different clinicians (for example the Coleman method), approximately 33-66% of the fat injected will undergo necrosis. Fat necrosis may be complete without any palpable or radiological evidence, but clearly there are potential adverse sequelae from the fat necrosis process when injected fat fails to acquire vascularity sufficient for complete viability.
Fat injections have a background in reconstructive surgery, and have been used for facial volume loss in conditions such as: HIV associated lipodystrophy, Parry-Romberg disease, following treatment for childhood facial tumours, connective tissue disorders such as scleroderma and systemic sclerosis, and for various craniofacial disorders. We know that PRP can help fat grafts survive in rats and in rabbits,7, 8 however the evidence in humans is scarce.

This has been a relatively short overview of the treatments that PRP can be used with in combination treatments. As with all of the best aesthetic treatments, it has a background in reconstructive medicine and surgery and I look forward to seeing more research and evidence to support its use in aesthetic treatments.