Advertorial: Efficacy and Tolerance of Sunekos® 200 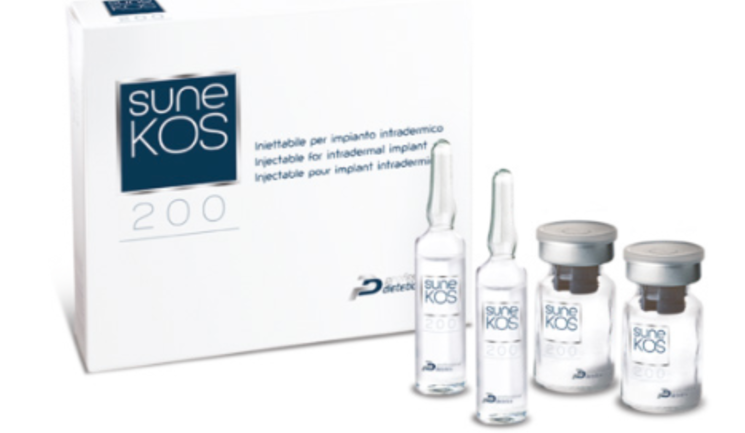 In July 2017, Efficacy and Tolerance of an Injectable Medical Device Containing Hyaluronic Acid and Amino acids: A Monocentric Six-Month Open-Label Evaluation was published in the Journal of Clinical Trials.1 This study was conducted by researcher Adele Sparavigna from the Clinical Research and Bioengineering Institute in Milan and Alessandro Orlandini who is based at Professional Dietetics in Milan, which specialises in patented amino acid formulas. Together, Sparavigna and Orlandini investigated the results that can be achieved with Sunekos® 200; a class III medical device comprising small bottles containing 100mg of sterile and apyrogenous lyophilised of Glycine, L-Proline, L-Lysine HCP, L-Valine, L-Alanine and sterile vials containing sodium hyaluronate (30mg in 3ml of distilled water).

The product, manufactured by Professional Dietetics and available through Med-fx in the UK, is designed to be used for the correction  of photoageing/ageing of the face and body. The injectable solution contains low molecular hyaluronic acid (HA) and a specific amino acids mixture, which has been formulated to physiologically promote local neocollagenesis and elastogenesis through fibroblasts chemotaxis migration into the injected area.

The open single-centre study was conducted under dermatological control in Milan. It included 25 healthy female subjects aged 48-65 years, with a mean age of 57. Each had mild-moderate cutaneous photoageing, with Fitzpatrick Skin Type I-III. The subjects were instructed to avoid strong UV irradiation on the face during the study period and not to change habits regarding food, physical activity, make-up use and facial cleansing products. None of the subjects had undergone aesthetic treatment 12 months prior to the start of the study or been administered permanent fillers in the past.

The injectable solution was prepared ex tempore, mixing the amino acids powder with the HA solution. The first intradermal treatment (T1i) was performed during the first visit (T0), after basal evaluations and repeated after 10 (T2i), 20 (T3i) and 30 (T4i) days. Treatments were performed with a 30G, 13mm needle, with a microinjection technique by a specialised dermatologist, bilaterally on the face (zygomatic protuberance, nostril’s angle, inferior margin of tragus, lip-marionette lines, mandibular angle). The injected volume selected for the four implants was 3ml (1.5ml for each side) for each session performed. Subjects were evaluated in basal conditions and after 4, 8, 12 and 24 weeks, using validated clinical scales, subjective evaluations and objective quantitative outcome measures. Assessment of aesthetic results included photographic documentation.

Four subjects dropped out of the study due to personal decisions. No other important events occurred that may have interfered with the results during the study period. Obtained results showed an improvement of all the clinical and subjective assessments and on the majority of objective instrumental parameters. These were already significant 10 days after the first injection procedure and were still significant and still improving after six months (at follow up). Global judgment on tolerability was good/excellent, both in the investigators’ opinion and volunteers’ self-evaluation.

A total of nine light/moderate bruises on some injection points occurred during the protocol following injections. They totally disappeared within five to 10 days. One subject complained 48 hours after the second treatment of the appearance of a moderate bruise associated with a light oedema to the left periocular area; the event was treated with lactoferrin cosmetic cream (two times a day for five days) and followed until complete resolution. Since all these reactions represent expected events imputable to the injection procedure, the investigator judged the product tolerance as good-excellent in 100% of subjects, which was also confirmed by the subjects’ self-assessment (38% as good and 62% as excellent).