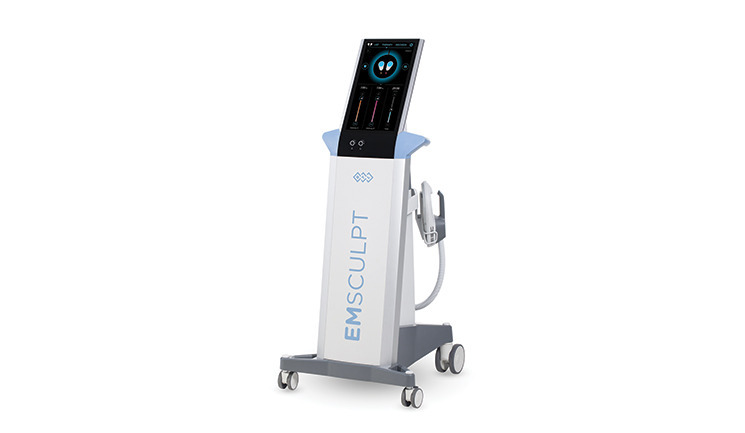 Practitioners discuss the technology and success of Emsculpt treatments

Over the last 10 years the industry has seen a plethora of technologies and devices to reduce fat in order to meet demand for body contouring with varying degrees of success. It was reported that 60.7% of men and 71.6% of women are dissatisfied with their body shape.1 In contrast to this fact, the British Association of Aesthetic Plastic Surgeons (BAAPS) audit reported only 2,093 liposuction procedures took place in 2017, a year-on-year decrease of 28%. Potential patients are not only more aware of the risks of surgery but are also aware of the results that can be achieved with safer non-invasive techniques. Dr Ravindran Rosh, who practises in Cheshire, commented, “Patients are becoming increasingly aware that non-surgical treatments can deliver great results,” while Dr Rita Rakus, who is based in Knightsbridge, added that, “Our clinic experience confirms this as, year-on-year, we have seen increases in demand for non-invasive body contouring.”

Technologies to date have been based around various energy forms to generate thermal changes to create apoptosis in the adipose tissue. Whilst different technologies have achieved varying levels of moderate success, the fundamental fact is that they all only achieve a reduction in the body fat. It is well accepted that the reduced and toned look is the desired endpoint for the majority of patients, with Dr Anita Sturnham, who runs a clinic in Wimpole Street, stating, “This is the next generation of body contouring and goes back to our core principles of healthy body composition, which involves losing fat and building lean muscle mass.” Whilst reducing subcutaneous fat is an important part of improving body contour, as it typically makes up 25% of the human body,2 it is worth remembering that muscle tissue consists of 36-42% of the human body.3 Treating both structures of fat and muscle is a paradigm shift in the objectives of reshaping patients’ bodies.

Dr Preema Vig, based in Marylebone, comments that, “Emsculpt occupies a very unique position in my clinic by treating both fat and muscle in a fast, efficient way and, in addition, is attracting more new male patients.” Emsculpt is well established in the US and one of the first users in the UK was Dr Rakus who explains, “Even in the first month of use, as an established high volume user of body contouring freezing applications, we have seen an increased number of patients with a BMI too low for freezing and an increase in male patients attracted by the increased muscle tone aspect of Emsculpt.” Electromagnetic stimulation is not to be confused with electrostimulation, which has very poor outcomes and complications such as pain4 and risk of burns.5 Dr Vig says, “Patients tolerate Emsculpt well and there is no downtime.” Electromagnetic stimulation has been used in various clinical applications and has shown to consistently strengthen and tone muscles4,6 and induce intensive, muscle, supramaximal contraction through application of high-intensity magnetic pulses which induce lipolysis.7 Bringing such technology to the market in a way to give confidence to providers about results that almost seem too good to be true, the manufacturer BTL embarked on an extensive clinical trial period of two years prior to commercial launch.

“Emsculpt occupies a very unique position in my clinic by treating both fat and muscle in a fast, efficient way and, in addition, is attracting more new male patients”
Dr Rosh Ravindran

Dr Rosh notes, “With such a radical departure from existing body-contouring methods, it was an important factor in choosing to use Emsculpt that good scientific trials had been completed prior to launch.” In total, seven clinical articles prior to launch using measuring techniques including MRI, ultrasound and multiple peer-reviewed studies have been published.

BTL felt the bar needed to be raised in terms of evidence-based medicine to prove the effectiveness. Further studies using various methods of measuring effect were conducted using CT scans, ultrasound and MRI evaluation techniques to objectively quantify the results. Dr Sturnham comments that, “We were impressed with the level of testing based on excellent scientific methods such as MRI prior to the system coming to the market. It gives confidence to invest in the technology at this early stage in the life cycle of a product.”

The science method of action

Muscle fibres relax between each nervous stimulus due to the central nervous system’s inability to signal another impulse while the previous one is still in action. Contractions with a tension higher than MVC are defined as supramaximal, increasing the physiologic stress/workload. Muscle tissue is forced to adapt to such extreme conditions and responds with a deep remodelling of its inner structure, i.e. the growth of myofibrils (muscle hypertrophy). The energy is derived primarily from adenosine triphosphate (ATP) and secondarily from creatine phosphate and glycogen to fuel the muscles. When these are depleted, the body’s catabolic processes take place in the form of lipolysis. During an Emsculpt treatment, the muscles are contracted to supramaximal levels, where the amount of released FFA exceeds normal levels, and they start accumulating intracellularly in surrounding adipocytes, eventually leading to their dysfunction in the localised structures. Patients receive four 30-minute treatments and are reporting results very quickly with no downtime. Dr Vig says, “Our patients love this treatment and even women with post-baby muscle separation are commenting on immediate benefits due to the increase in muscle tone.”

Dr Rakus adds, “We advise our patients they will see results in six weeks, however, most report improvements in the first week as the muscles respond very quickly to the Emsculpt application.” As women age and oestrogen levels deplete, muscles weaken and fat can accumulate around the abdomen of women of a certain age. Dr Sturnham comments, “A lot of our female patients, despite their best efforts, cannot hold back this thickening of the torso and Emsculpt delivers excellent results on these ladies; it’s like a supernatural workout.” The Emsculpt also appears to be benefitting even the most arduous of gym goers, Dr Rosh treated his own personal trainer who was quite sceptical due to his understanding of sports and fitness, however he commented that it. “Was the heaviest abdo workout of my life and the results already have surpassed what I have been able to achieve aesthetically to date – I can now push on further with conventional exercise.”

It would appear the word is getting out as Dr Sturnham explains, “We have patients who have heard about Emsculpt in such places as Tatler and social media and are asking if we have this.” To conclude, it would appear that according to the experience of four UK-based doctors, BTL is at the start of a paradigm shift in how clinicians approach body contouring; from size reduction with only fat removal, to size reduction with fat removal and improved appearance, through extreme improvement in muscle tone and density in short periods of time.

Dr Rosh has tried the acid test by having the treatment himself and states, “I can speak personally having had the treatment that I have reduced abdominal fat and increased muscle tone,” while Dr Vig concurs with the results in her own clinic, stating, “My team tried the Emsculpt treatments for themselves, which has led them to referring it for their own patients.” Finally, Dr Rakus comments, “Despite having attended lectures by doctors from the US already using Emsculpt, we always remain cautious even with the amount of clinical data produced pre-UK launch. Based on this, we committed to incorporate Emsculpt, but we were still astounded when we’ve seen the results we were achieving in our own clinic.”