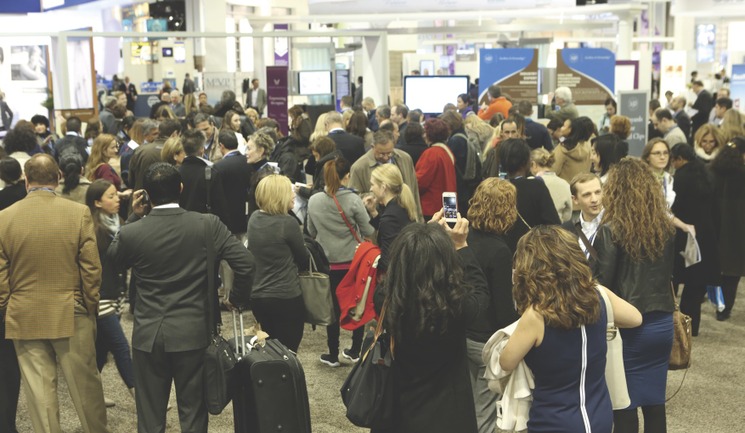 With more than 350 sessions and attracting over 16,000 delegates and exhibitors, the 72nd Annual Meeting of the American Academy of Dermatology, which was held in Denver Colorado between March 21 and 25, is the largest and most prestigious dermatology conference in the world. This was the 30th consecutive AAD meeting I have attended. This year, I was invited by the Academy to be guest presenter at two sessions on injectables and facial rejuvenation.
The protocol I described and demonstrated was the use of different volumising fillers and neurotoxins for synergistic improvement of the facial lines and ageing. This is achieved by using hyaluronic fillers such as Voluma or SubQ as lifting and filling injections, administered to the zygomatic area and mid-face.
To correct volume loss caused by age, weight loss or post-acne scarring, Sculptra can be administered to the mid face following these hyaluronic filler injections. Combining Sculptra with hyaluronic fillers creates the optimum lifting and filling effect, and one that improves over time and with subsequent Sculptra treatments. Some patients also benefit from injection of botulinum toxin to the depressor angulae oris, the jawline and platysma, with small doses of neurotoxins. During the live demonstrations, a simultaneous cadaver dissection showed the relevant anatomy, and key areas to avoid or be cautious with, such as the periocular nasal and lower facial areas, because of their vascularity.
Serious complications of injecting filler into the blood vessels and causing blindness or skin necrosis when treating these areas with fillers were discussed at length. The consensus view of the dermatologists was that injections into these areas should be classed as high risk interventional procedures and should only be administered by specialist physicians with additional training. If signs of ischemia appear, such as pain or blanching, we can immediately inject Hyalase to dissolve the filler, apply nitroglycerin paste to the affected area and consider other treatments to increase vascularity, such as oral niacinamide. Any visual disturbances should be treated as an ophthalmologic emergency.
There were interesting sessions on body contouring. Systems such as Venus Freeze, Venus Legacy and ThermiRF administer radiofrequency plus magnetic resonance and can achieve a steady state deep tissue temperature of 48-50°C, providing collagen tightening, and refining body contour. For cryolipolysis, the Zeltiq system was considered at present the most reliable and fully tested system. Fat necrosis has been described with other systems. The key to success for all body contouring treatments is to be realistic in patient selection and evaluation. For example, it may be necessary to suggest weight loss before treatment, and patients with significant excess skin should be referred for abdominoplasty if they desire. Cynosure’s new Nd:YAG vascular laser presented an alternative treatment for facial redness. Unlike pulsed dye lasers, it did not result in several days of bruising, and patchy, irregular improvement.
There were interesting presentations on combination scar treatments, showing how needle-driven RF systems such as Intracel or fractional CO2 lasers deliver microscopic channels into hypertrophic or keloid scars, reducing vascular supply and scar density. Megapotent cortisone creams can then be applied, which penetrate deeper into the scar tissue, reducing scar thickness. Patients can also apply Haelan tape overnight to the scars. Any scar erythema can then be reduced with vascular lasers. Several treatment sessions may be required depending on scar size and density. Recent topical treatments were also discussed for rosacea; in addition to Galderma’s recent Mirvaso (Brimonidine gel) for facial redness, which has been available in the USA for several months, there was an interesting new treatment of rosacea papules and pustules with Ivermectin (a drug used to treat headlice) delivered as a gel. The mechanism of action is not known but may involve a reduction in dermadex population in rosacea lesions. One of the most exciting products discussed at the meeting was a new biologic drug developed for adult atopic eczema. Patients treated with Dupilumab, an antibody drug targeting the cytokine interleukin 4, saw disease activity decline significantly. About 85% of patients treated with Dupilumab had at least 50% improvement in Eczema Activity and Severity Index (EASI-50) after 12 weeks, compared with 35% of the placebo-treated patients. We have several active biologic drugs for psoriasis but Dupilumab is a first to be active in atopic eczema.
AAD also named its contact allergens of the year, which are causing frequent contact dermatitis. This year one was benzophenone-3, the sunscreen ingredient better known as Oxybenzone. The other key allergen discussed was methylisothiazolinone (MI), a widely used preservative in shampoos; particularly when used every day, it can be a significant contributor to facial and neck dermatitis. Attending and listening to the presentations reminded me of the vital role dermatologists and skin specialists hold as ‘dermatology detective’; identifying causative factors in skin diseases and being the specialist for all diseases and treatments of skin, hair and nails, as well as having the optimum knowledge for aesthetic treatments. This was an excellent conference from which delegates learned much new information and I brought back to the UK many ideas to refine our dermatology and aesthetic practices at the Cranley Clinic.

According to the IMCAS Tribune, the global market for cosmeceuticals (referred to by the French as cosmeceutiques or cosmetique active) is valued at $1.05 billion for 2014 and is projected to grow to $1.38 billion by 2018 (imcas.org). This represents an average annual growth rate of +7.4%. Unsurprisingly, the principal zones, in descending order, were the US, Asia, Latin America, and Europe. Nowhere was this trend more apparent than at the 72nd annual American Academy of Dermatology Conference where, although the anti-ageing category captured the lion’s share of attention, acne, scars, stretchmarks, sensitive skin, sun protection, and pigmentation solutions all had a strong presence.
Elizabeth Arden entered the physician channel with the Elizabeth Arden Rx collection featuring Triple Protection Factor Broad Spectrum Sunscreen SPF 50+, based on a combination of of three protective and restorative ingredients - DNA Enzyme Complex, Antioxidant Complex and broad-spectrum SPF 50+ sun protection in a moisturising base. Another new launch into the physician distributed skincare arena was GMC Medical, from G.M.Collin, a 25-year-old Montreal based spa brand. This comprehensive line of a dozen products addresses acne, skin ageing, sun damage, and pre- and post-medical aesthetic procedures. L’Oreal put forth new entries from some of its active cosmetics brands, while SkinCeuticals captured attention by featuring an impressive total of 13 scientific publications, and the debut of Resveratrol B E Antioxidant Night Concentrate. La Roche Posay showcased the new Anthelios 60 Ultra Light Lotion Spray with Cell-OX Shield, which boasts new micro shield technology to protect skin during intense UV conditions and in water. Also launched at the meeting was NeoStrata’s new Skin Active Triple Firming Neck Cream, which targets the neck and décolleté areas with Swiss Apple Stem Cell Extract and an array of proprietary ingredients. Exuviance Age Reverse HydraFirm, a luxurious cream that targets the visible signs of ageing and replenishes optimal hydration levels, was on display boasting a triple firming complex of patented Bionic, NeoGlucosamine and Matrixyl Peptides to plump and fill skin. The Canadian giant Valeant Pharmaceuticals International presented its new Neotensil daily under eye reshaping procedure, available through Obagi Medical and sold in clinics. Finally, pigmentation problems always take centre stage at the AAD and this year was no different. ZO Skin Health, Inc., from Dr. Zein Obagi, introduced two new GSR Systems, comprehensive home care kits designed for normal to dry and normal to oily skin types, as well as two new specialised pigmentation treatment programs, ZO Multi-Therapy Hydroquinone System and ZO Non-Hydroquinone Hyperpigmentation System.