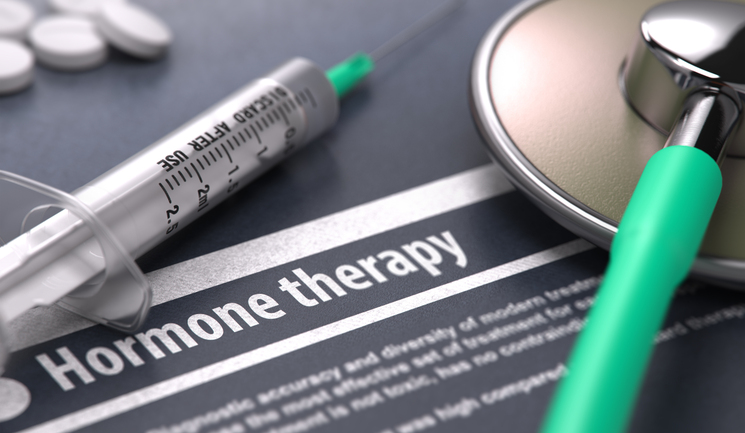 For more than 20 years, I have successfully treated thousands of patients with hormonal imbalances such as premenstrual syndrome, perimenopause, menopause, fatigue, mood swings, acne and ageing skin using bioidentical hormone replacement therapy (BHRT). I have developed research and training to raise awareness of its efficacy and benefits; training many medical professionals. I am passionate about making BHRT mainstream and available for everyone. Because a woman produces less oestrogen as she ages, most commonly from her early 40s,1 the amount of collagen, which provides underlying support for her skin, drops. The result is a loss of firmness and elasticity; the skin around her mouth and eyes begin to sag and wrinkles deepen.2 I believe that one of the best ways to rejuvenate ageing skin is by replacing the declining production of oestrogen, progesterone and testosterone. But like any treatment, I would advise practitioners to learn why it works, how to use it safely and to select the best possible training.

Replacing the missing oestrogen with hormone replacement therapy (HRT) would seem an essential component of any antiageing programme. However, the Women’s Health Initiative trial in 2002, which tested HRT and a placebo on 162,000 post-menopausal women, highlighted a link between conventional HRT and an increased risk of cancer and heart disease. The trial took place over 10 years and included treating women with two non-bioidentical hormones; Premarin, which is an oestrogen derived from mare’s urine – known as conjugated equine oestrogen (CEE) – and a Provera which is a progestin named medroxyprogesterone acetate (MPA). The combination indicated an increase in the relative risk of heart disease by 26% and of cancer by 25%.3

Since then, some women have been wary of using HRT, and practitioners only tend to recommend it for the treatment of menopausal symptoms such as sweating, flushing, insomnia and mood swings, and for as short a time as possible.

Bioidentical hormones have the same chemical and molecular structure as the naturally-occurring hormones produced in the body. As a result, they fit their hormone receptor sites wholly and their effects are more consistent with the normal biochemistry of the body.6 These hormones are derived from plant sources such as Mexican yams and soy, and manufactured into micronised powder form.4 For a hormone to be considered ‘natural’ or ‘bioidentical’, its structure must replicate the exact structure of the hormones produced by the body, including the arrangement of carbon, oxygen and hydrogen atoms.5 A ‘synthetic’ hormone has slight structural differences to a hormone produced by the body, which means it can act differently and produce substantially different effects. Synthetic hormones have a different arrangement of carbon, oxygen and hydrogen atoms compared to naturally-occurring hormones in the body, and sometimes have additional atoms such as sodium or sulphur.6

The bioidentical hormones often prescribed are estradiol, estriol, progesterone, testosterone and dehydroepiandrosterone (DHEA). Firstly, the practitioner must check the levels of these hormones through a blood test. They must also look at a combination of symptoms, medical history, and lifestyle along with the blood results. Weight gain and mood swings, for example, are linked with increased sensitivity to oestrogen while trouble sleeping can indicate a progesterone deficiency.11,12 Acne, facial hair and greasy skin suggest an excess of testosterone.13 Most bioidentical hormones are delivered via transdermal cream, lozenge, capsule or pessary in prescription forms that are tailored to the patient.

Getting the balance right

The very effectiveness of hormones means that they have to be prescribed individually and designed specifically for each patient. Oestrogen given on its own has long been linked with an increased risk of cancer of the womb, which is why it needs to be balanced by bioidentical progesterone.11 Controlled studies and some observational studies have indicated that a combination of oestrogen and progestins increases the risk of breast cancer, while a recent study suggests the oestrogen/progesterone combinations do not raise the risk.14

With the possibility of adjusting dosages as required, side effects seldom occur.15 As well as the suggested reduced risk with BHRT, this approach is far more individualised. While HRT is prescribed in a standard dose without any testing to find out what a patient’s actual hormone levels are, BHRT practitioners are aware that oestrogen, testosterone and progesterone are not the only hormones that decline as we age and that the levels of each hormone can influence others, which include DHEA and vitamin D. For example, increasing progesterone levels has been indicated to increase the level of free thyroxine;16 a supplement of DHEA has been suggested to raise progesterone levels;17 while one of the effects of hypothyroidism is to reduce testosterone levels because it down-regulates the first step in testosterone production.18

Bioidentical hormones have been around since the early 1930s and are now increasingly accessible and are what I feel is an important option in balancing hormones.

The benefits of balanced hormones

Oestrogen is actually a combination of three forms of the hormone – estriol, estrone and estradiol (Figure 1) – each of which can be used independently. Estriol has been indicated to have what is a very welcome cosmetic effect – improving the condition of skin scarred by chronic acne.19 Supplementing oestrogen can increase firmness and smooth wrinkles on the face, as well as provide some degree of protection against skin photoageing,20 improve sleep and maintain muscles.21 However, their benefits aren’t limited to making the skin more youthful. A study in the Journal of the American Pharmacists Association highlighted the beneficial effects on the brain of both oestrogen and progesterone by such routes as increasing blood flow, reducing inflammation and protecting brain cells, all of which show both emotional and health benefits.22

The impacts on some other areas affecting health, such as changes in weight, are more complicated. As oestrogen levels decline, women tend to put on more fat around the stomach; whereas, when these levels are increased to normal levels with BHRT, fat is more likely to be stored under the skin subcutaneously.15

Testosterone might be added to a prescription for someone suffering from low libido, as it has been linked with an improvement in wellbeing, mood and sexual function in menopausal women.23 As well as a low libido, testosterone deficiency is linked with fatigue irritability and depression. Correcting it can improve memory and energy.24 Most of the research on hormones has been conducted on menopausal women, but even the normal monthly oestrogen fluctuations of younger women can cause changes in skin thickness, increasing the possibility that an oestrogen cream could benefit women of a lower age.15 If a patient is particularly sensitive to oestrogen; signs of which include breast tenderness, fluid retention and headaches,25 a progesterone cream may do just as well. A double blind trial including 40 peri or post-menopausal women aged between 45 and 60 who applied a progesterone cream every night for 16 weeks noted improved elasticity, improved firmness and a reduction in wrinkle count.26

Improving the external appearance using dermal fillers or botulinum toxin isn’t always enough. If practitioners really want to enhance a patient’s appearance, we need to change the way they think and feel, which is where hormones can help. BHRT can provide a powerful new tool that would fit easily into any aesthetic programme, offering improvements in energy, mood and physical appearance.

Disclosure: Dr Marion Gluck has developed and provides an introduction course in the UK on bioidentical hormones, aiming to provide practitioners with competency to treat common conditions such as premenstrual syndrome, acne, perimenopause and menopause using BHRT.