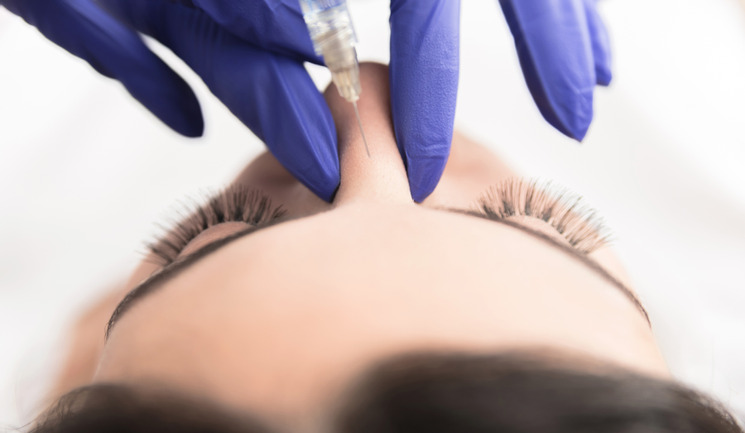 Soft tissue augmentation using dermal filler has grown in popularity with hyaluronic acid (HA) based products comprising the most commonly used soft tissue filler.1
HA fillers are generally considered to be safe treatments with relatively rare and transient side effects,2 however rare complications can occur, such as vascular occlusion (VO) potentially leading to skin necrosis.3

If a VO is diagnosed and treated rapidly using an appropriate protocol, for example the Pulse Protocol4 (discussed later) skin necrosis can be prevented or reversed, and complete wound healing can be achieved.5 This may prevent long-term skin damage and longstanding deformity. If immediate reversal of vascular compromise is delayed and skin necrosis presents, there is evidence hyperbaric oxygen therapy (HBOT) can aid clinical improvement.6,7
In this case study we will present a patient who suffered a VO following a non-surgical rhinoplasty using HA dermal filler, how she was treated, including the use of hyperbaric oxygen therapy, and how full resolution was achieved following this complication.

The 30-year-old female patient underwent a non-surgical rhinoplasty with EPTQ dermal filler at an undisclosed location by a non-medical professional. Around seven hours following the treatment, the patient noticed skin discolouration and contacted the initial injector, who subsequently reviewed her. The skin changes were deemed to be an allergic reaction due to the skin preparation fluid. After a second opinion by the injector’s trainer via FaceTime, the patient was again advised this was a rash due to the skin preparation fluid.

The patient subsequently sought a second opinion by contacting aesthetic nurse Mikala Foster at Essex Cosmetics clinic via a WhatsApp image and asking for help, as she was extremely concerned this was more than just an allergic reaction. As soon as the image had been reviewed, the patient was advised by Foster to come in urgently for a face-to-face assessment, due to the likelihood of a VO following the procedure.

The initial injector was called to discuss exactly what had been injected and where – they claimed they were going on holiday that day so weren’t able to intervene. It was confirmed that the patient had been injected with approximately 0.3ml of dermal filler via two injection points, using a technique where the dermal filler was decanted into a BD Insulin syringe prior to injecting (there was no information regarding aspiration).

The nasal tissue was mottled and cool to touch, with an area of pallor present across the radix point

The patient complained of numbness to the bridge of the nose, as well as reporting a sharp sensation in her left inner nostril along with generalised pain, which she described as severe and rated 7/10. On examination, the nasal tissue was mottled and cool to touch, with an area of pallor present across the radix point. There was tenderness on palpation to the left side of the nose and nasolabial area. There was a delayed capillary refill of four to five seconds to the nasal tip and bridge (which should usually be equal to or less than two seconds), with significant livedo reticularis following the pattern of the facial, supratrochlear, angular and dorsal nasal arteries. Vision was intact.

A warm compress was applied with massage to assess if any improvement would occur, while hyaluronidase was simultaneously prepared. As expected, there was no improvement or increased skin perfusion, so the Pulse Protocol4 – which involves continuous flooding of hyaluronidase to the occluded area, as established by the Aesthetics Complication Expert (ACE) Group World – was initiated immediately with the aim of dissolving the product and  subsequently achieving reperfusion the skin. 1,500iu of hyaluronidase was administered to the areas in 40 to 60-minute cycles as per the protocol, repeated four times.

Injection points from the previous injector were still obvious so hyaluronidase was flooded through these entry points both perpendicular to periosteum, and superficially with small boluses and liner threads. Hyaluronidase was administered to the nose, adjacent areas, around the nasolabial fold and forehead, following the pattern of the reticulated tissue. The hyaluronidase was administered using a combination of 32 gauge needles for precision. A 25 gauge blunt tip cannula was also used to cover a larger area with reduced trauma to the tissue, as well as comfort for the patient. This was important to minimise bruising and aid accurate capillary refill assessment. No topical lidocaine was used throughout the management to prevent a topical hue on the skin, and the patient tolerated treatment well so did not require it.

After each cycle, capillary refill was reassessed, and the skin was re-examined closely for positive tissue changes. Whilst the nasal tip was improving rapidly, the radix point continued to show pallor with a sluggish capillary refill. Four cycles were competed by 10pm that evening, when the patient was unable to tolerate further treatment due to exhaustion. It was explained we should continue, however the patient refused and agreed to return first thing in the morning.

In total 6,000iu of hyaluronidase were administered on day one and the patient was also prescribed 300mg aspirin stat and 50mg sildenafil stat, both with the aim of improving circulation and tissue perfusion. 30mg prednisolone once a day for five days was prescribed to reduce swelling and inflammation. The patient was also prescribed 500mg clarithromycin twice a day for seven days to prevent an infection to the hypoxic skin. The ACE Group World guidelines for vascular occlusion were followed throughout.

During the treatment, it was deemed beneficial to discuss how hyperbaric oxygen could help, due to the widespread nature of the complication and skin changes.8 A referral was made to a local chamber, and the patient privately had five cycles of hyperbaric oxygen. When the patient returned the following morning, the delayed capillary refill and pallor remained present and a further 1,500iu of hyaluronidase was administered to the radix point. A clear improvement was made almost immediately and, reassuringly, the capillary refill time went back down to two seconds.

Following this, the patient subsequently received five hyperbaric oxygen treatment sessions over five days, with continued resolution of symptoms. Each session in the chamber took an hour but, with the preparation time involved, the patient was there for approximately three hours each day.

The patient was seen again in the clinic 21 days following her presentation, where she had made a full recovery, with complete resolution of her VO and skin changes. Following her experience, the patient has not been put off further HA filler treatment but will now only see experienced and qualified medical professionals able to recognise and manage a complication.

As well as always using the safest technique possible, it is important to understand the anatomy of the face – especially the vascular supply – being aware that there are many anomalies. Remember there is no 100% safe technique, so reducing all risks as much as possible will increase the safety of the procedure. Also remember that the nose is one of the most advanced areas to treat with dermal filler, so we recommend gaining experience in general aesthetic medicine prior to undertaking this procedure.

Being able to diagnose a VO is extremely important, as well as being competent to manage one, for example a complications course is always a good option, as well as reading or online learning on how to manage an emergency situation.
Have your protocols written up, easy to locate and follow, as during a complication such as a VO, stress and nerves may set in, therefore simple instructions would be much easier to follow in an emergency situation. Always ensure adequate stock of hyaluronidase in case you require multiple vials.

Also ensure to ask for help early – we discussed this case the day after the patient presented. As we all learn during our basic life support training, it is always wise to ask for help as early as possible if the situation may require additional support. In a case like this, time is of the essence, so it is worth asking early if you need it.
Create a local support network or join an association, where you can seek aid and advice if required, subsequently, a complications group to support you if you find yourself in a challenging situation. We also recommend collaborating with local teams such as the plastic surgeons, ophthalmologists and your local hyperbaric team, for situations such as this.

We must remember to communicate openly and honestly with the patient to ensure they understand what is happening, and why we recommend a particular emergency treatment. We have a duty of candour to our patients, which should be upheld at all times. It will likely be a stressful time for patients, and many will be very scared, so empathy and clear explanations will be greatly appreciated.
Photography is extremely important to continually assess and should be mandatory for the medical records. A consent form should be discussed and signed as well. Be aware of different types of dermal filler, and the effect of hyaluronidase on them, as different fillers are dissolved at different rates or quantities of hyaluronidase.9
Reflection on a complication is always worthwhile as it will allow you to see what you did well in that situation, and what could have been done differently if this were to reoccur.

This case study highlights the importance of acting quickly to resolve a vascular occlusion, which is a medical aesthetics emergency. Having set protocols and being competent in managing complications is extremely important, as the more treatments we do, the more risk there is of occurring.

Also, patients may present to us having been treated from another clinic with an emergency complication, so it is important to be able to act appropriately and manage the situation, as well as understand how to escalate where required.

Note: This case was brought to aesthetic nurse Mikala Foster. All prescription-only medicines mentioned in this article were prescribed by aesthetic nurse prescriber Charlotte Page, who reviewed the patient and works alongside Foster at her clinic, Essex Cosmetics. Dr Manav Bawa was contacted the day after the event for further guidance and opinion on the management approach.