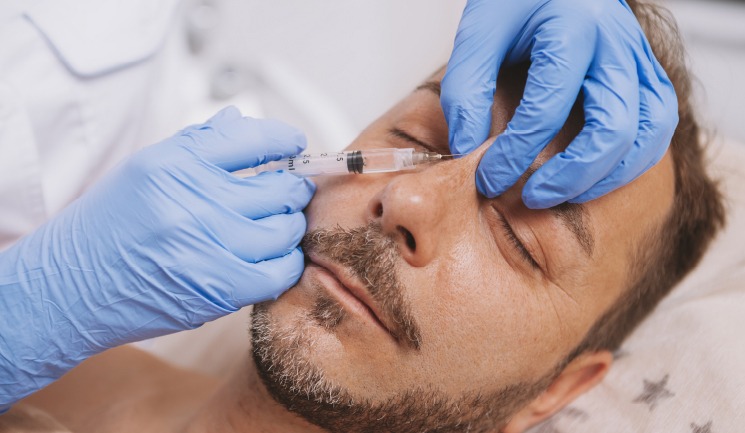 Non-surgical rhinoplasty (NSR) using dermal filler is an increasingly common procedure.1 It is particularly effective in cases with a low radix, mild to moderate dorsal hump, insufficient tip projection and to improve the nasolabial angle.

The most common filler product used is hyaluronic acid. This is because it has good biocompatibility and is reversible. It also has reasonable longevity with typically 12-18 months of filler presence, depending on the specific product used.2

It has been observed in my own practice, as well as in the literature, that HA injected into the nose may last longer than other areas.2 It is considered a more advanced filler technique with a relatively steeper learning curve, requiring good knowledge of the anatomy and techniques to maximise safety and aesthetic outcomes. Like other filler procedures, common complications are minor and include bruising, erythema, pain, oedema and under- or over-correction. Patient satisfaction overall tends to be high.2 Incidents of serious complications, which include blindness, have been well described in the literature but are generally a low figure.3 A recent large meta-analysis reported a rate of 0.43% for skin ischemia and necrosis, and 0.09% for vision loss.3

This article discusses a patient who had filler injected into the nose in December 2020 at a different clinic before being referred to my clinic for review and continued management of an ischemia related complication.

A 32-year-old male patient had presented to another clinic requesting a straighter nasal dorsum and better tip projection. He previously had filler in the nose and in the lateral brow areas. The practitioner injected 1ml of a well-known dermal filler using a cannula with a single-point entry at the nasal tip. The clinic reported there were no obvious ischaemic changes to the nose or surrounding area immediately. In the early stages of vascular occlusion, visible changes to the skin can be subtle and, as in this case, can look similar to initial erythema and skin colour change from moulding the filler.

The following day, the patient reported some pain and change in skin colour along the nasal dorsum towards the tip and on the right lateral wall of the nose. He was asked to return to the clinic for review. By this time, there were obvious early signs of vessel occlusion, erythema and livedo reticularis along the dorsum of the nose, right nasal sidewall and glabellar areas.

The practitioner injected two doses of hyaluronidase, each containing 1,500 units along these areas. It was then discussed virtually with me as the referring clinic wanted another opinion on the severe complication. As no other therapy had been started, I advised him to take 300mg of aspirin (continuing with 75mg for a week thereafter) and 30mg of prednisolone for three days to reduce swelling that had already started. No other therapies, such as antibiotics, glyceryl trinitrate patches, phosphodiesterase inhibitors nor hyperbaric oxygen, were commenced as there was no indication or a paucity of evidence for clinical effectiveness.4,5

By day two post-procedure, the distribution of skin colour changes increased. In addition to the above areas, the upper and lower eyelid rim became purplish. Erythema was present along the right brow and extended into the right malar area. The medial one third of upper and lower lid eyelashes had fallen out. He went to an emergency eye hospital for review and, finding no intraocular abnormality, was discharged with no treatment. He attended my clinic for the first time for a face-to-face review, as the previous practitioner wanted to get a second opinion on the case.

As the discolouration extended, I reinjected more hyaluronidase (450 units, with 1% lidocaine for comfort) as microdoses to spread evenly across this extended area. It is worth noting that his previous brow filler, which lay within the distribution, also dissipated. Gentle warm compresses and massages were performed to help disperse the drug and encourage vasodilation. The nasal dorsum was not reinjected as this area had high doses injected the previous day. He was asked to commence on vitamin C and zinc supplementation to maximise healing.

I advised on basic skincare to keep the area clean with gentle cleansing, light moisturisation and sun protection. There was the beginning of some pustule formation, which lasted the subsequent seven to eight days. The distribution of the discolouration stopped progressing by day three but deepened in colour until day four to five. The peak of inflammation was on day four to five, and thereafter, the discoloration started improving. The final pustule dried out by day 10.

At two weeks, there were no scabs, pustules or inflammation, and skin texture started to normalise. Discolouration had downgraded to mild erythema. I advised him to start a vitamin C serum, niacinamide serum and to continue with sun protection to minimise hyperpigmentation. At four weeks, there was only faint erythema at the nasal bridge with a slightly depressed scar. By six weeks, all discolouration had resolved, but the depressed scar was visible. By three months, the depressed scar was almost imperceptible.

The patient was keen to have another NSR but was advised to wait at least six months before further injections. This allowed the soft tissue envelope of the nose to settle and any subcutaneous scarring to mature. It was emphasised that any filler procedure in the area would be higher risk due to scarring or possible aberrant vessel anatomy. The patient understood the risks and elected to have another procedure six months after the skin change had settled, with a non-complicated outcome. This was performed with 1ml of Restylane Lyft using a 27G short needle and slow injection technique at the supraperiosteal and supraperichondrial planes.

For this procedure, I applied a cool pack to the dorsum of the nose for 10 minutes prior to injecting, which vasoconstricts the blood vessels temporarily for safety and reduce bruising. Using the non-injecting hand, the sides of the nose are compressed to guide midline placement of filler and prevent spread of filler in case of inadvertent intravascular injection. Segreto et al. describes a further modification to this – to blanch the area by pushing down with the same fingers before injecting, draw up the tissues ‘onto the needle’, then maintain some pressure on the nasal sidewall when injecting.6 Before injecting, I always aspirate, although it is debated whether this is a useful manoeuvre.7 Slow injection in small aliquots is important to prevent larger quantities of filler being injected into a vascular area. Gentle continuous pressure is applied as each injection point is completed to minimise bleeding. For 30 minutes post-procedure, a cool pack was intermittently applied to the area to reduce inflammation. He was advised to sleep with a slight head-up position for the first night. He was invited back for a two-week review.

This was a typical case of vessel occlusion from filler material entering the vascular network. Early signs include blanching, pain, reticular pattern of erythema with pustules formation and skin ulceration. Late consequences, if suboptimally managed, include depressed scarring, textural and pigmentation differences and asymmetry. If early (<2 days) treatment is commenced, less ischaemia is allowed to consolidate and therefore outcomes are maximised. Late presentation is associated with skin necrosis and scarring.8 Having knowledge of the anatomy around the nose is essential prior to performing injections in the area.9,10

Placement of filler is safest in the midline and at the supraperiosteum and supraperichondrium layer where there are fewer vessels.11 In my opinion, injecting directly into the sidewall should be avoided if possible, but if required, placing tiny aliquots with constant movement may minimise the risk. There is variability of vessel anatomy between individuals, especially in those who have had previous filler complications or surgical rhinoplasty.11,12

When I inject patients, the injection order is usually radix, rhinion, tip and supratip. This ensures that the maximal tip projection achievable for a patient’s skin envelope can be matched with the supratip. If the tip is performed last, there is a risk that not enough tip projection can be achieved to match the supratip injection.13 Recurrent tip droop can be due to under-treatment, restrictions of a tight skin envelope or presence of a tight face mask resting on an area of the nose. I tend to overcorrect the tip of the nose, if the skin allows, by 1-2mm. This allows for a reliable projection of the tip with a supratip break after the oedema settles.

The use of needles and cannulas are valid techniques. Some argue that it is difficult to ensure the tip is in the correct plane when using a cannula, and that it can give a false sense of security when injecting larger volumes.14 Larger bore cannulas are less likely to cause vessel damage, and easier to maintain in a deep plane.15 As a practical point, cannulas are not ideal for those with a marked dorsal hump. From the entry point at the tip of the nose, the cannula would have to contour over the hump significantly to maintain a supraperiosteal plane superior to the hump.

The Aesthetic Complications Expert (ACE) Group World and Complications in Medical Aesthetics Collaborative (CMAC) both have guidelines for the management of filler-associated vessel occlusion.4,5 Due to the time-sensitive nature of vessel occlusions, it is advisable to have a kit ready, which contains all the equipment and hyaluronidase vials along with a copy of the guidelines. If treated early, most cases will not progress to skin necrosis.2,6

Use of hyaluronidase in those without ischemic sequelae should not be taken lightly. There is a small risk of anaphylaxis and local skin allergic reactions occurring. Be wary of those with bee or wasp sting allergies as there is cross-reactivity. An intradermal test can be performed, but ensure the clinical space has anaphylaxis support available.15,16 Hyaluronidase will dissolve other filler material in the treated areas. In the case described, the patient’s previous right brow filler was dissolved. The effect of hyaluronidase in the tissues lasts up to six hours, and filler re-injection is possible but not recommended.16,17 The local tissue inflammation and presence of pustules render the whole area a zone of trauma. Until the soft tissue envelope settles fully (at least six months after the event), re-injection is high risk.16,17

NSR using dermal filler is an effective and generally safe procedure as long as certain risk-reducing techniques are implemented. Ischemic complications relating to vessel occlusion should be recognised early, treated expediently with the help of guidelines and monitored for best outcomes.