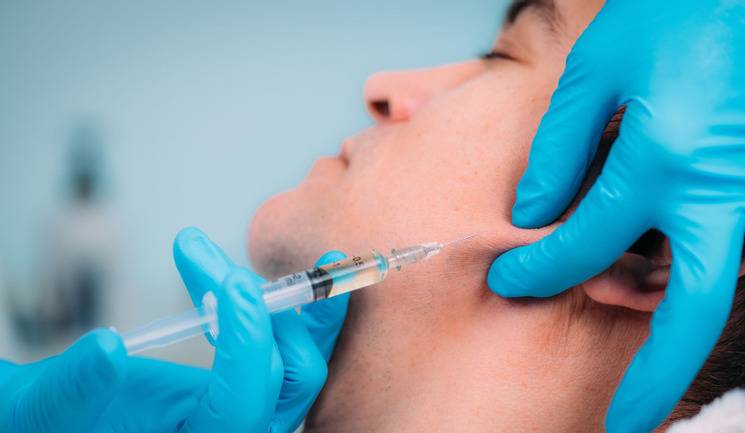 There are approximately 650,000 individuals in the UK, roughly 1% of the population, who identify as gender nonconforming or gender diverse.1 Despite these numbers and the growing mainstream representation of transgender and nonbinary individuals, there is paucity of literature exploring non-surgical aesthetic techniques2 for facial transformation of transgender patients and, more importantly, articles that discuss combination modalities. I have sought to evaluate treatment outcomes in two patients, one transitioning from female-to-male and one from male-to-female, with sequential deep-to-superficial aesthetic techniques.

Secondary sexual characteristics explain the differences between male and female faces. The mature male face tends to have a higher hairline, more prominent supraorbital ridges, thinner cheeks and a larger mandible (i.e. characterised as ‘squarer’) than the female face. Other traits, such as the presence of facial hair and the distribution of facial fat, also determine ‘masculinity’ according to socially determined gender ideals. The ideal female face is characterised as oval with a smooth forehead, a pinched nose, and small, pointed chin. Laterally, the female forehead is sloped unlike the male forehead, which exhibits frontal bossing.3

The first case is a 40-year-old female-to-male patient (Patient A) who sought to have a more ‘masculine’ jawline and face shape. He had not had any previous aesthetic procedures done and was unaware of the benefits of non-surgical aesthetics in achieving his treatment goals. The patient has been on masculinising hormone therapy for eight years with excellent tolerability to the regimen and sought to have finalisation of his facial transition.

The second patient is a 22-year-old male-to-female patient (Patient B). She had been on oestrogen for three years and sought help to achieve a more feminine (or ‘heart-shaped’) face. She expressed the desire to have more prominent cheekbones. While Patient B had never had any aesthetic procedures in the past, she was keen to be treated, having seen before and after images of my patients on social media. As she has only been on hormone therapy for three years, I advised her to undergo gradual transformation and softening of her features as her facial structure continues to feminise with oestrogen.

During my first session with each patient, I made sure to stress that they should have realistic expectations of the treatment outcomes, and explained the need for treating conservatively, rather than overtreating. It was essential to rule out clinically significant distress or impairment in social, occupational, or other important areas of functioning from body dysmorphic disorder or gender dysphoria. A few publications outline routine clinical questions that can be used to recognise and understand body dysmorphic symptoms.4

Both patients were counselled regarding the need for an adequate safety support network of family and friends, to be aware of potential downtime after treatment, and to watch out and report untoward incidents following the procedures. Naturally, it was essential to know their skincare regimen. In female-to-male patients, it is normal to encounter frequent breakouts as a result of enlarged pores and oily skin.4 Thus, most patients on androgen supplementation may require acne-specific therapy.

To address the possibility of pain during the procedure, the patients were advised that the fillers contained lidocaine, and topical anaesthesia was applied where appropriate. The threads were inserted under local anaesthesia. Both patients were also advised regarding the safety of the products used and were familiarised on the breadth of clinical experience of the practitioner. They were informed of the longevity of results (e.g. 18 months for the threads) and the reversibility of the procedures.

Relatively larger quantities of fillers than usual are necessary to achieve reshaping of soft tissue volume in the face to achieve masculinisation/feminisation. Essentially, the goal is to build on areas that are lacking in volume or projection (e.g. feminine jawline to masculine jawline or masculine cheeks to feminine cheeks). Lastly, the customary approach to multimodal aesthetic therapies is from the deep to superficial layers of facial tissue; hence, fillers first (periosteal), followed by threads (subcutaneous) and then peels (superficial skin).

For both cases, I used RELIFE Definisse soft-tissue fillers,6 bioabsorbable suspension threads made from poly(L-lactide-co- ε-caprolactone), along with resurfacing peels from the Definisse Peel Program.7 The choice of products and the combinations used are likely to affect clinical outcomes, so it is important to select the appropriate product and product combinations that you have extensive experience in.

For Patient A in the first session, I used Definisse Core where a total of 5ml of product was injected into each jawline and 3ml was injected into the chin, using a 27 gauge needle to achieve a squarer frame. In order to allow for the healing of swelling and bruising from the filler infiltration, a two-week rest period is recommended before the next procedure.

After these two weeks, I proceeded with Definisse Threads using the Lateral Reshaping (LR) technique. This technique is used to reshape the facial frame by inserting the threads from the tip of the sideburns to the nasolabial fold by lifting the superficial fat compartments of the cheeks upward and sideward. The second needle repositions the superficial fat compartments along the jawline upward and laterally.8

Skin peeling was then accomplished on the third session, which after two more weeks to allow for the healing of the fibrotic tissue surrounding the threads. Definisse classic peel, comprising salicylic acid, pyruvic acid, and retinoic acid was applied to address the excess sebum formation on the patient’s skin (Figure 1).

For Patient B, I used 1.5ml of Definisse Restore injected on the lateral forehead by fanning with a 23 gauge cannula, and small periosteal boluses in the middle forehead in order to reduce supraorbital bossing and to achieve a more convex forehead. Care should be taken when administering in the mid forehead by infiltrating deep and aspirating before injecting the filler. In the nose, 0.3ml was injected to achieve a more pinched/thinner look, which is considered to be feminine.9

Definisse Core filler was used in each cheek (1.5ml injected to each side) and in the chin (2ml used). After two weeks, Definisse Threads were placed using the Malar Reshaping (MR) technique and the Oval Reshaping – Vertical (OR-V) technique in order to achieve a more oval, feminine facial shape.8 The MR technique lifts the superficial fat compartments of the malar area upward and laterally, while the OR-V technique lifts the mid and lower-facial superficial fat compartments upward – together, these techniques achieve a three-dimensional superolateral oval reshaping to feminise the face. The Definisse lightening peel, which is a formulation with N-undecyl-10-enoyl-L-phenylalanine (Sepiwhite) and N-undecylenoyl phenylalanine, an alpha-melanocyte-stimulating hormone (MSH) receptor antagonist to reduce hyperpigmentation after eight weeks,1 was used to even out the skin tone (Figure 2).

Both patients expressed satisfaction with the results and were informed of the total improvement expected after a certain amount of time.

Local site reactions, hypersensitivity, infections and errors in placement are rare and reversible complications of these modalities. Vascular compromise can be presumed if there is sharp pain, blanching over a distal area or if there is necrosis, which are considered to be medical emergencies.10 However, the only side effects documented for both patients were swelling and bruising. These were managed using conservative methods such as application of ice packs, elevation of the head when sleeping on the first night and restricting movement and/or manipulation of the treated parts of the face.

Practitioners of medical aesthetics should be aware of the intricacies associated with the treatment of gender nonconforming patients. All of us should be equipped with adequate knowledge regarding the benefits and challenges inherent in each of the modalities used individually and in combination to achieve individualised aesthetic goals. Discuss your treatment plan openly and professionally with your transitioning patients to allay any apprehension they may have and to ensure that they have their full faith in you as their treating physician.