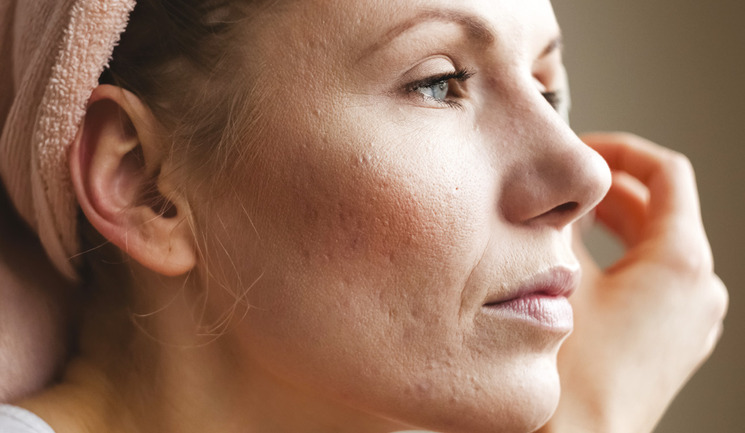 Acne vulgaris is a common skin condition affecting 650 million people worldwide with a 95% prevalence of acne in adolescence.1 It is reported that 12-14% of cases will continue into adulthood with psychosocial effects2 and 20-35% will develop moderate to severe acne that has an increased risk to cause textural skin changes to the superficial and deep dermis.1,3

These dermal changes result in permanent scarring of the skin, leading to substantial physical and psychological distress, particularly in adolescents.4 It is crucial that acne treatments are sought early on, and that acne scarring is not overlooked, in order to reduce the incidence of psychological distress. For this reason, treatments should be effective and delivered in a timely manner.

There are a variety of treatment options available for acne scarring, which can include topical preparations, dermabrasion, laser resurfacing, non-ablative and fractional laser, punch excision, subcutaneous incision, chemical peels, dermal grafting, and fillers, as well as focal treatment with trichloroacetic acid, and skin microneedling (automated or roller devices).3 With such a variety of treatment modalities available, both evidence of efficacy and safety profile needs to be taken into account when deciding upon which treatment is suitable for the patient.

Aust et al. state that the ideal treatment for acne scarring should preserve epidermal integrity whilst also promoting the normal formation of collagen and elastin structures within the dermis.5 Treatments that disrupt the epidermal integrity such as punch excision, ablative laser resurfacing, and deep peeling agents remove the epidermis in its entirety and can give rise to biological adverse skin responses, resulting in post-inflammatory hyperpigmentation (PIH) and further scarring.6

With this in mind, in my opinion, microneedling brings us closer to the ideal scar treatment as epidermal integrity is maintained by needles that penetrate, but do not remove, the epidermis, thus reduce the risk of adverse outcomes.5 Upon penetration of the stratum corneum, small channels are created, known as micro-conduits, that lead to a natural inflammatory healing cascade; stem cells located within the dermal papilla are activated7 and platelets and neutrophils are recruited to release growth factors TGF-alpha, TGF-beta, and platelet-derived growth factor (PDGF).8 This, in turn, stimulates the fibroblastic action of collagen and elastin production in the papillary dermis.9 The mechanical action of the needles passing through scar tissue is also thought to play a role in the breakdown of existing fibrous collagen type III that forms within scar tissue, replacing over time with the preferred collagen type I.10 Newer treatment modalities, such as fractional lasers and non-ablative lasers, also appear to provide effective results through a similar mechanism of action.11 However, a study in 2016 revealed that microneedling is a more cost-effective approach, with comparably effective results, a better safety profile and less downtime than non-ablative fractional laser treatments.12

Whilst microneedling has been shown to be an effective treatment of acne scarring,13 downtime and discomfort can remain problematic, albeit less so than other forms of treatment in my opinion. Erythema, oedema, and micro-bruises are the most commonly-reported side effects,3,7,11 however, there are very few studies detailing the average time that this can last. In my experience, post-procedural erythema can last three to four days post acne scar microneedling because an aggressive needle depth of 1.5-2mm is required.14

In a busy world where recovery time is often restricted for patients, one strives to reduce post-procedural side effects as soon as possible without reducing the efficacy of the treatment itself. As erythema and oedema are the result of the natural immune response to heal, it could be hypothesised that any treatment given to address this skin response could in fact reduce the efficacy of the treatment itself.

Acute inflammation, which occurs immediately after an injury, is a temporary event to limit further injury as well as to begin the repair and healing process.15 When inflammation persists, however, not only is the patient’s downtime prolonged, but excessive healing responses are activated which could increase the risk of adverse events.15 For this reason I chose to include cord-lining stem-cell conditioned media into my microneedling protocol. This fluid contains epithelial and mesenchymal secreted bioactive molecules, including proteins, cytokines, and growth factors, that are able to effectively communicate with the epidermal and dermal cells of the skin via the paracrine effect.16 The paracrine effect is the process in which stem cells can communicate to local cells via bioactive signaling molecules.17,18 This multitude of paracrine factors form part of a complex network that confers stability to the cells as well as amplification of the regenerative response, thus exerting beneficial effects upon injured tissues via biomodulation, promoting angiogenesis and tissue regeneration and inhibiting fibrosis, apoptosis and inflammation.17,18

I devised my own clinical protocol for the treatment of acne scarring in my clinic, called CellRenew Microneedling. Utilising a combination of gentle enzymatic peeling, automated microneedling with cord-lining stem-cell conditioned media,16 and the use of post-procedural red LED light therapy, I have seen a noticeable improvement to the outcomes I am achieving.

My observation in practice is that I have also reduced the number of treatments I need to provide. This means the number of occasions that my patients need to undergo what could be considered an uncomfortable procedure is reduced.

A 24-year-old female presented in clinic and informed me that she had suffered with acne since adolescence. She sought treatment advice for acne scarring however, upon consultation and examination, she still had acneic lesions to her cheeks and forehead. Her acne was assessed as moderate which presents as open and closed comedones, papules and pustules.19 There was also evidence of scars that had already formed from previous lesions.

We discussed the importance of treating her active acne in the first instance and gaining control over the occurrence of new lesions, before exploring scar treatments. She had a past history of both topical and systemic antibiotic use, of which she had not found to be effective in gaining control of new lesions. She stated that she was keen to explore non-antibiotic routes. She had considered systemic isotretinoin via her GP referral, but after reviewing side effects, felt she did not want to pursue this.

It is crucial that acne treatments are sought early on, and that acne scarring is not overlooked, in order to reduce the incidence of psychological distress

Initial treatment for six weeks with topical treatments, including retinol 1%, salicylic acid 2%, a gentle gel cleanser and mineral UV protection, was advised to begin with. This simple regime was recommended so as to target the pathogenic factors of acne through the downregulation of excessive sebum production and inflammation, and decrease corneocyte adhesion and microbial activity.20,21 The mineral UV protection was advised to reduce the occurrence of PIH.

I reviewed the patient at six weeks where I noted that there was improvement to her overall lesion count. The patient was also pleased and encouraged that the regime was working. Prior to starting, I had advised that it may take up to six weeks until she saw the beginning of lesion control, and 12 weeks for significant improvement.20 I advised the patient to continue the topical regime for another six weeks. There was no need to change anything as her progression was as expected.

I reviewed the patient again at 12 weeks and I was pleased with her progress. She had no acneic lesions present and visibly-reduced comedones. A plan was made to begin treatment for scarring using my protocol. The patient was asked to remain on the skincare throughout the course of treatments to maintain acne lesion control.

To start the protocol, I cleansed the skin and then applied the Enzyme Re-Texturising Peel from AlumierMD for five minutes. The purpose of this aspect of the treatment was to prepare the skin for application of Calecim Professional cord-lining stem-cell conditioned media during and following microneedling. Fruit enzymes are able to effectively degrade the tight epidermal junctions of keratinocytes and permeabilise the skin barrier for topical formulation absorption.22 Whilst microneedling alone provides micro-conduits for deeper skin delivery of stem-cell conditioned media molecules, the de-keratinised skin will improve the passage of the cord-lining conditioned media to pass into the whole epidermal surface.

Following the enzyme peeling, a thick layer of LMX4 topical anaesthetic cream was applied for 20 minutes and half of the LMX4 was then removed from one side of the face and cleansed with Clinisept+. The summary of product characteristics for LMX4 states that treatments should be performed soon after removal to ensure comfort,23 therefore, I choose to remove topical anaesthetic from only one side to allow the other side to continue the anaesthetic effect and maintain comfort when treated.

It should be noted that just as the de-keratinised skin will allow for greater permeability of topical therapeutics,22 it will also increase topical anaesthetic absorption, and consideration should be made for lidocaine toxicity and medical history interaction.24 On the positive side, topical anaesthetics that are applied to skin surfaces that have been de-keratinised show a greater degree of effect in less time.24 I then began the microneedling stage on the cleansed half of the face. Calecim Professional Serum was applied to the skin throughout the procedure as a skin glide. Microneedling to the whole area was treated at a depth of 0.5mm to bony areas and 1mm to non-bony areas.

The needling pattern was provided in small sections as a back and forth glide, with slight overlap, travelling back again, and then cross-hatching in the same glide motion. A second pass of microneedling at 1.5-2mm was then performed to focus specifically over scars. This second pass allows for micro-conduits to be placed at varying depths within the scar tissue. The LMX4 was removed from the other side of the face and cleansed again with Clinisept+. The process was repeated to this side. The Calecim Serum was then gently pressed onto the skin of the whole face until half the bottle (2ml) was used. Once dry, a sterile gel was applied to the whole face. I use a non-cytotoxic hydrogel that is provided with the SkinPen Precision microneedling cartridge. This aims to support a moist wound-healing environment while hydrating the skin.25

The patient was then bathed under the SlimFit LED mask using a combination of red, blue and near infrared LED light, with frequencies 415 nm, 630 nm and 830 nm, for 20 minutes.26 This dual therapy acts to provide antibacterial (blue light), fibroblast stimulating (red light), and wound healing (near infra-red) benefits.27 Aftercare was discussed and the remaining half bottle, plus another bottle, of Calecim Serum was given to the patient to apply regularly over the next 24 hours. Following this application, the patient was advised to apply the aqueous gel used previously. A bland colloidal oat-based cream was given to be applied for three days. This acts to supports a non-inflammatory path for skin remodeling and supports barrier repair and renewal.28 I then recommended that the patient continue her normal skincare regime, as previously advised, to maintain acneic lesion control. She had a further two treatments of the whole protocol, spaced six weeks apart.

The patient was able to achieve near total scar recovery within her treatment course. I reviewed her six weeks’ after her third treatment and she was delighted with the results. There were no complications experienced throughout the treatment course, other than transient erythema for one to two days and dry flaking skin for up to one week. Our next plan is for the patient to remain on her advised skincare for acne management and to return once a year, for single treatments of my protocol, to maintain her skin appearance.

Acne has a large prevalence in society, particularly in younger individuals. If not effectively managed in a timely manner, both physical and psychological scarring can occur. The case study I have presented has shown how, in my practice, I am effectively treating acne scarring, as well as other applications of effective skin functioning and form, such as textural improvements too.