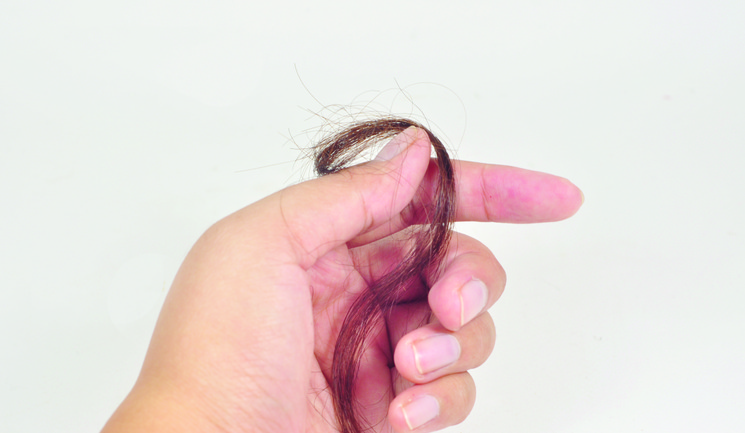 This case study will detail the treatment of a 59-year-old female (Patient A) who presented to my clinic with progressively thinning hair, which she was becoming increasingly concerned about. Her medical history revealed nothing abnormal. Clinical examination revealed thinning hair on the crown and frontal part of the scalp. The hair that was present was shorter and thinner in nature (miniaturised hair) (Figure 1).

Figure 1 demonstrates how Patient A initially presented. It can clearly be seen that her hair is thinning and, according to the history provided, this has been getting progressively worse over a period of two years, meaning that Patient A was becoming increasingly self-conscious. A diagnosis of female pattern hair loss (FPHL) was made based on the clinical picture and the history given by the patient.

FPHL is the most common form of hair loss in women and the incidence increases with age. It is characterised by a reduction of hair thickness over the crown and frontal part of the scalp. The severity can be graded according to the Ludwig scale (Figure 2) and Patient A was classified as Grade I on the scale.1

FPHL is common, with the highest prevalence occurring in postmenopausal women. Hormones and genetic predisposition are believed to contribute to FPHL, but the mechanism through which these factors lead to the condition is not fully understood. Most women with FPHL do not have abnormal levels of serum androgens.2,3

Classic presentation of FPHL follows slow, progressive transition of terminal hairs on the crown and frontal part of the scalp to miniaturised hairs and vellus hairs, resulting in a visible reduction in hair coverage on the scalp. The occipital scalp and frontal hairline are often relatively spared.4 This hair loss can lead to psychological distress so the importance of treating these cases should not be overlooked.

The diagnosis of FPHL is usually made clinically, based upon the patient history and physical examination, which demonstrates a reduction in hair density in the characteristic distribution and an increased prevalence of miniaturised hairs. Skin biopsies are not usually performed,5 but some authors recommend it.6 In this case, the goal of treatment was to arrest hair loss progression and stimulate hair regrowth by stimulating the dermal papilla, which sits below the hair follicle.

The dermal papilla is mesenchymally-derived tissue with inductive properties. As the human scalp contains approximately 100,000 to 150,000 hair follicles, there are many papillae to target. The dermal papilla induces the development of hair follicles in the foetus and appears to play an important role in follicular cycling and hair growth (Figure 3).7

Patient A was informed of the possibility of providing treatment with PRP in an attempt to encourage hair regrowth in the thinning area. PRP is completely autologous. It is a concentration of platelets in plasma obtained from a patient’s blood, which is then used as a treatment for the same patient. PRPs are a rich source of growth factors and other important biological proteins promoting angiogenesis, chemotaxis, cell proliferation and differentiation. PRP has been researched and used in various fields of medicine and has emerged as a novel treatment modality. There is evidence to suggest that it is effective in the treatment of hair loss conditions by promoting hair regrowth.8,9,10

The patient was fully consented and a treatment regimen of three treatments three weeks apart was planned and undertaken. I chose to deliver the injections to the area needed utilising mesotherapy. My preferred mesotherapy method is the use of the U225 mesotherapy gun. Injections can be delivered by hand, but patients report that the U225 is virtually painless making the procedure as comfortable as possible. Also, it is extremely easy to vary the depth of the needle and adjust the droplet size of product being delivered, ensuring that each injection is consistent.

While there are a number of PRP technologies available, I chose to use PRGF-Endoret (plasma rich in growth factors-endogenous regenerative technology). There are more than 100 peer-reviewed published studies regarding PRGF-Endoret, indicating its effectiveness in various fields of medicine. Out of more than one million treatments performed worldwide, there have never been any adverse effects reported. I have used this product for many years, within dentistry as well as aesthetic medicine, and have only seen positive results in healing and tissue regeneration and rejuvenation. PRGF-Endoret is a PRP obtained by taking small volumes of the patient’s blood and then placing the blood into a specialised centrifuge. Only one, short (eight minutes) centrifuge stage is required, unlike some other PRPs that require more than one centrifugation. After the blood has been spun, different layers are observed in the tube. The first layer seen is the straw-coloured plasma. Just below the plasma a greyish ‘buffy’ layer can be observed, this is the white blood cell (WBC) layer that has been separated from the rest of the plasma by the centrifugation process. The third layer is the haematocrit, the red cell layer of the blood after separation.

As mentioned previously, the WBCs are separated from the plasma during the centrifugation stage. This is unlike other types of PRP, which incorporate WBCs. Advantages of using PRP that do include WBCs are that they can protect the body from infection. The disadvantages of PRPs that include WBCs are:

The patient did not report any discomfort throughout any of the three separate procedures. There were no adverse events during or post procedure, such as bleeding, pain or swelling, and healing was uneventful. After the first treatment evidence of hair regrowth was observed; new tufts of hair were identified upon clinical examination (Figure 4).

Patient A was extremely happy with the results achieved (Figures 5 & 6) and further examination and photographs will be taken at three months post treatment to assess hair regrowth and thickness.

This has been a very rewarding case to treat. Since having treatment, Patient A has been able to grow and style her hair, and her confidence has increased significantly. She sends me regular photographs of the progression of her hair growth (Figure 7) and reports that her hairdresser is amazed with the difference. There are numerous options for the treatment of FPHL5 including various medications and adjunctive therapies such as hair transplantation, camouflage and light therapies. PRP treatment of FPHL should be looked upon as a favourable treatment option as it is completely autologous with no reported adverse effects, there is no downtime associated with the procedure and treatment can be performed relatively quickly and easily in a painless manner. However, further research is needed, with more objective measurements of hair regrowth than presented within this case report.