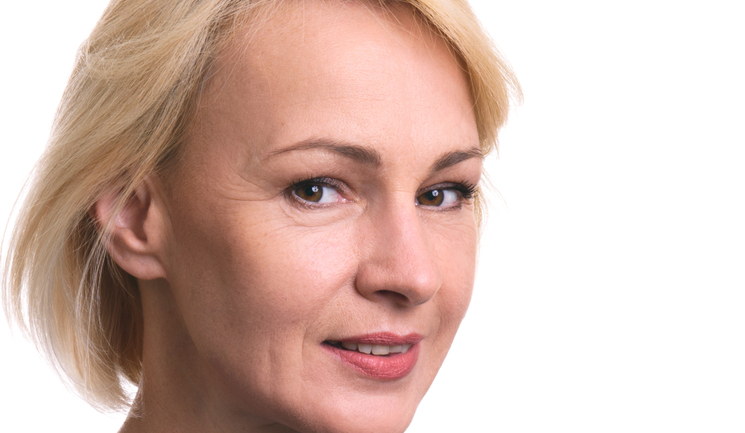 A 50-year-old female patient who I have treated many times before with toxin, fillers and high-intensity ultrasound came into my clinic complaining that, after going through the menopause, she felt her face was changing shape and becoming almost masculine. From performing an assessment, I could see that her jawline appeared to be ‘squaring off’ and her cheek area, although not completely flat, had definitely dropped, giving the appearance of a heaviness to the jowl area. The buccal fat pads were also accentuated due to loss of volume and separation to the malar pads. The patient presented with the typical appearance of mid-face fat loss which was affecting the lower face.

Although the patient initially came to me requesting filler to add volume to the nasoloabial folds, I decided that restoring lost volume within the cheek area would be more beneficial. I knew that, by injecting the lower face with dermal filler, I might accentuate the heaviness that she was already experiencing. I had to explain this to my patient and assure her that by lifting the cheeks, the lower areas would be improved and lifted, and that we needed to look at what was causing the heaviness, not add to the thickening of the lower face. Once this was explained, my patient was happy to proceed.

The process of facial ageing starts with structural changes on the surface and subsurface on multiple tissue layers, including skin, fat and muscle, as well as changes to the bone structure itself. Volume loss occurs due to fat redistribution, bones become thinner and flatter in places and muscles and ligaments loosen, which underpin the skin. All of these factors contribute to an overall aged facial appearance.1

As with this patient, the menopause also has an effect on facial ageing. Oestrogen is responsible for stimulating the deposition of fat evenly throughout the female body but, following the menopause, there is a reduction of oestrogen levels, resulting in fat being deposited in a high concentration on the abdomen, buttocks and thighs, and less so on the face and neck.2

Changes in one area due to ageing will affect the surrounding areas, as seen in this patient, so it is important to understand the ageing process before carrying out these treatments. If the patient’s nasolabial folds were to be injected, the buccal fat pads would appear to thicken, which would add to the heaviness. This is the opposite of the look we are trying to achieve. It is important to always look where the cause of the symptom is and correct this rather than the result of the cause. The shape of this patient’s face is typical of many women in their late 40s, where we can see the face changing from a V-shape, to a square, bottom-heavy shape. This can be reversed, to a degree, by restoring volume to the mid-face, as this will impact on the appearance of the lower face.

Choosing the correct filler is very important, especially when you are restoring volume to a patient’s face, as you need a filler that is going to retain its form, but is still flexible on movement. It must support the tissue and integrate well so the patient cannot feel a hard bolus of product.

In my clinic, I tend to stick with using hyaluronic acid (HA) filler. This is a personal preference as, if there is a problem, we can dissolve the filler immediately using hyaluronidase. One of the prime considerations to make when choosing which product to use is the thickness of the patient’s skin. If the skin is thin, then a softer product is generally better. As such, I usually use thinner products for older patients. If a patient has adequate soft tissue coverage, like the patient in this case did, then a thicker filler may be used. For this patient, we chose Juvéderm Voluma as it is a thick, viscous product and gives shape and volume to an area. We also used Juvéderm Volift to give support beneath the cheek area. Volift has a good lifting effect but has a medium viscosity and less extrusion force is needed when injecting.

For this patient, I chose a thick, viscous product that gave shape and volume to the area. I also used a medium viscosity product which had a good lifting effect and needed less extrusion force is when injecting.

As well as the product, the correct technique of injection is also important; if you are not injecting in the right plane or depth you will not get the desired result from the product.

I marked where I wanted to inject on the patient’s face after cleansing thoroughly. By doing this, I was able to note the danger areas I intended to avoid, such as the zygomatic facial artery, infraorbital artery, parotid gland, buccal nerve and the facial artery and vein.

I also marked the point on the zygomatic arch, where the patient used to have the most protrusion or width. Some of this had been lost due to the ageing process with bone structural changes and loss of fat pads. I used topical anaesthesia, although I always tell patients that cheek fillers are more ‘uncomfortable’ than painful due to the depth of the injection and they tend to feel more of a pressure than any real pain. I injected using a needle at the highest point on the zygomatic arch, going down to the periosteum, aspirating, then depositing approximately 0.1ml of Juvéderm Voluma, which gave a visible lift.

I then moved down to the second injection point, which was approximately 1cm away from the first injection site. This second bolus of approximately 0.1ml continued to build on the cheek structure to give the patient a lift, which was noticed due to the softening of the nasolabial folds. I added another point to restore the malar pad which had dropped, causing quite a heavy fold.

This patient did not show signs of separation, usually seen as a dip between the middle cheek fat pad and the nasolabial fold, instead she just looked heavy and square in the lower face. The cheek had now lifted and the two sides of her face were clearly different due to the lift achieved with the added volume. At this point I showed the patient the difference between the two sides and took photographs of the side view to demonstrate the difference.

I then moved lower down the face to address the lateral lower cheek and parotid area. By treating this area, I was able to lift the jawline. I used a cannula, injecting midway between the nostril and the tragus to vector the product; this helped to support the area I had treated above, as well as to lift the lower face. By injecting slight volume into the lower cheek and the submental, the jawline was improved and a lower lift was created, which slimmed the patient’s face. In this area I used a total of 0.7ml filler; this was more than was used on the other side, where only 0.5ml was needed.

There was no bruising and the patient’s results were subtle, as requested. The patient was given aftercare advice and an emergency number to call just in case. She was advised that bruising and swelling can occur, but will quickly resolve. I also mentioned that redness and a tenderness is normal, but I advise patients that if they are experiencing pain or throbbing to call the clinic immediately as this may be an allergic reaction or a possible infection. In addition, I told the patient to get in touch immediately if she noticed any discoloration to the skin near the injection sites, as this could mean a possible occlusion.

The results obtained from creating mid-face volume on this patient impacted the lower face, lifting the nasolabial folds and improving the heaviness she had presented with. By treating the cheeks, we were able to soften the patient’s face and took away some of the heaviness that she had been unhappy about. The patient was reviewed after two weeks and remained happy with the results.