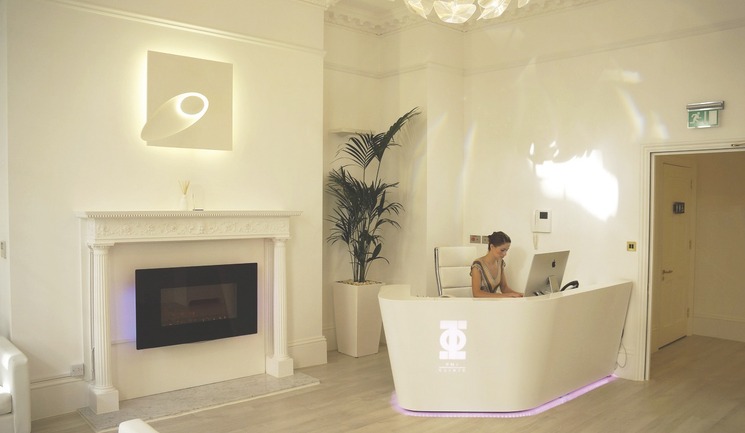 Essentially, my practice had outgrown my clinic in North London and we decided that it was time to find something in Harley Street. The site I chose was an empty shell that would need to be built up almost entirely from scratch. In my first clinic, the facial aesthetic procedures on offer were purely non-surgical, and with the new clinic I decided that I wanted to provide a wider range of aesthetic treatments for my patients. The first steps were to consider the name and concept for the clinic, and what I wanted to do architecturally with the space. The name I decided upon was the Greek letter PHI, the 21st letter of the Greek alphabet, pronounced ‘Fy’. The clinic takes its inspiration from Ancient Greek scholars, artisans and the notion of the golden ratio with its aesthetically pleasing proportions. The design for the clinic wasn’t based on any practice that I had previously seen. I wanted to reinvent how cosmetic-based practices were presented and perceived. The idea was to make it a combination of traditional but modern, clinical and professional. Initially, this seemed to be a mass of conflicting themes but I felt that there was a way for me to bring all these disparate notions together.

I met with an architectural design specialist, Roger Gullidge, and very early on he was able to explain to me what could be done with the space. I already had some design concepts that I had been working on, and when I shared my ideas and vision for the clinic these began to be transposed into the foundations of a plan. During the development I was on site a lot; I wanted to be there as often possible, and it meant that I could be involved in all of the day-to- day decisions. I also employed a project manager and a building company, which meant that I didn’t have to carry out the actual running of the site myself. Considering the rebranding of the practice was a very different process to the construction of the site, it was carried out through working with a specialist website and graphic design team who were able to come up with specifically tailored branding that suited the new clinic. In the new clinic, patients are offered both non-surgical and surgical solutions for all indications, and I wanted this to be reflected in the image of the practice, especially as previously the clinic’s provision was purely non-surgical. Amazingly, we didn’t come across any significant obstacles or problems during the build or design; in fact we were very lucky throughout the entire project. When I originally selected the site I was aware that it was a listed building and knew about the relevant controls and regulations, but I wasn’t overly concerned about these issues. Fortunately, having a specialist architectural design company on board able to deal with these factors, and who had experience managing this kind of build previously, meant that this was not a problem.
Now that the project is complete and has become a fully working practice, I am particularly pleased with the clinic’s overall impression. For me, it really does create that kind of wow-factor that we had intended, and simply managing to get it all up and running in such a short space of time is a proud achievement.. The whole team here at PHI Clinic are able to share my excitement and pride everyday when we walk in to our gleaming new clinic – it really brings a smile to all our faces.The advice I would give to other practice owners going into a similar project is to allow plenty of time from conception to conclusion, and not to be too unrealistic as to the amount of your own time that a project like this will take up. You can budget for a build or for equipment, but there will always be unforeseen factors that can add to a project, and you have to make sure that you have the right timescale to accomplish what you want. I was fortunate in that respect. Beforehand, I had made some provisions for hidden surprises but luckily I was able to avoid any major problems. It would have only taken an issue with the wiring or the plumbing, or for the builders to find damage somewhere, to add a considerable unexpected expense. It is also worth noting what a big task it actually is to rebuild and rebrand a clinic. It requires coordinating building work with all aspects of the business; you will have to organize everything from the equipment to the staffing, the branding and the marketing strategies, as well as all of the legalities. It is very important to be under no illusion as to the huge amount of work that will be involved. Whether you are looking to rebuild or rebrand your practice to expand or improve the services you offer, I would suggest that you meet with a project manager as early into the conceptualisation of the project as possible. They will be able to use their experience to help identify what the limitations or possibilities of your project might be; if you’re not already in the field yourself you don’t always realise the potential that a building might have. From my own personal experience, I would certainly recommend getting that advice early on and working with a design service that will help you establish your artistic concepts and budgets to ensure the long term success of your business.
Looking back at the project, from start to finish, there isn’t anything I would have done differently. For me, it was very important to get this project right the first time, and I think we achieved that through detailed plans and a clear vision from the start. The new clinic is just as I had envisaged it, and now I don’t anticipate myself having to go through this process again.
The project began in March 2013 and took us right into January 2014. It’s difficult to say for certain so soon after its completion what affect this project has had on the success of the overall business, but it has certainly started with a bang. I have received masses of positive feedback about the clinic and its design, and I hope that patients and visitors alike will continue to be pleased with the outcome, and that this momentum will carry on for many years to come.