Considerations for Hyperpigmentation during Pregnancy 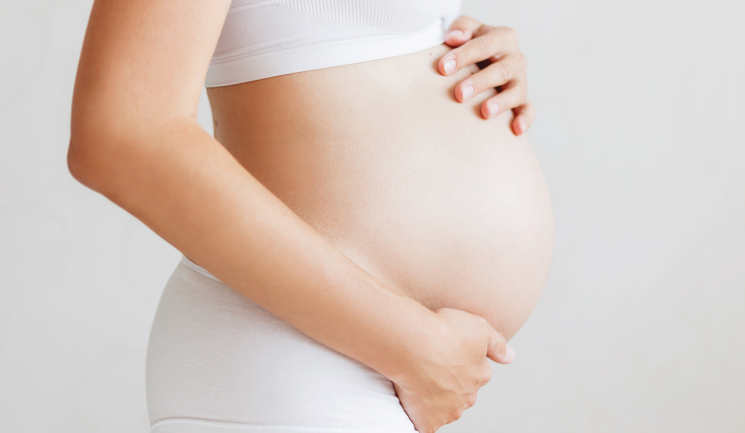 Hyperpigmentation is defined as excess pigmentation in the skin, and can occur secondary to excess sun exposure, inflammation, or endocrinological changes.1 Pregnancy, in particular, increases the risk of hyperpigmentation of the face, hands and body.2 Usual patterns of pigment for pregnant women include linea nigra found on the abdomen, darkening of the areola, and pigmentation that can affect the face, neck and décolletage.

Melasma is a common skin condition in adults, in which light to dark brown or greyish patches of pigmentation develop, usually symmetrically. This often occurs during pregnancy, most commonly on the face, and is often referred to as ‘the pregnancy mask’, typically presenting across the mid-face and malar region in a butterfly fashion. When the cause of the pigmentation is gone, the pigmentation may start to fade, though melasma, in particular, can be troubling and in some cases long lasting, and may result in significant psychological distress to the patient. It is also notoriously difficult to treat and there is no one definitive modality of treatment. Understanding the pathology and management is therefore imperative if we are to correct, or control, this condition. The purpose of this article is to assess different treatments available for hyperpigmentation and will discuss which ones would be suitable for pregnant patients.

Melanin is produced by melanocytes in the stratum basale via a process known as melanogensis.3 Melanocytes are cells that contain melanosomes, which are small sack-like organelles, in which the melanin is formed. The main chemical reaction is the conversion of the amino-acid tyrosine into melanin pigment, by the action of the enzyme tyrosinase.4 There are essentially two types of melanin made: eumelanin, which gives a red pigment, and pheomelanin, which gives brown pigment. Once synthesised, melanin is moved along arm-like structures called dendrites, to reach the keratinocytes. Over 150 genes have been identified that influence pigmentation5 and the base activity relies on various epigenetic factors which influence the density of pigmentation in the skin, depending on the skin type, which can be identified from the Fitzpatrick scale.6,7 The Fitzpatrick scale is a numerical classification for human skin colour and is based on the patient’s reports of how their skin responds to the sun, as well as skin, hair and eye colour.7

The main function of melanin is to protect the skin from ultraviolet B (UVB) radiation by its ability to absorb the energy generated by light, thus preventing damage to the underlying hypodermis.8 As such, it is important to remember that, in any pigmentation treatment, we are not looking to remove the capacity of the skin to produce melanin altogether, but simply to lighten its excesses and control its irregular production.

The exact cause remains unclear, but it is thought to occur due to increased levels of hormones that can instigate increased melanin formation.11 These hormones include:

The increased pigmentation can continue to progress during the pregnancy until delivery. The darkened areas usually fade in the post-partum period, though this may take several months and, in some women, may not completely fade.11 Melasma usually becomes more noticeable in the summer and improves during the winter months.12 Hyperpigmentation in pregnancy can have a significant impact on confidence and self-esteem, and often warrants treatment. It is vital, however, that the aesthetic practitioner counsels the patient appropriately, reassuring them that once the hormonal cause of the pigmentation, i.e. the pregnancy, is over, it is likely the pigment will fade. Nevertheless, there are certain treatments which are deemed safer for pregnant patients to use than others, as mentioned in further detail below.

There are a number of medicaments that have been reported as useful in the control of melanin production, as described below. The use of medicaments in pregnancy needs to be carefully evaluated by the clinician on a risk-to-foetus vs benefit-to-mother basis; taking into account the extent to which they can penetrate the skin barrier and be absorbed systemically, thus potentially having a toxic effect on the developing foetus.

The use of sunscreens is fundamental in control and prevention of hyperpigmentation, and is recommended during pregnancy and lactation, as in all other times of life. The physical sunscreens zinc oxide and titanium dioxide, which deflect and block the sun’s rays, are considered safe during pregnancy. Chemical sunscreens which absorb the sun’s rays include two general classes – the PABA (para aminobenzoic acid) derivatives and the cinnamic acid derivatives. Both are deemed safe and the actives do not penetrate the skin barrier.9 Sunscreen should be encouraged during pregnancy and beyond as a long-term preventative measure against sun damage.

Hydroquinone is a skin bleaching medicament used topically that works by inhibiting the action of tyrosinase thus preventing melanin deposition.4 This is typically used in a formulation of between 2-4%, and is often used in combination with a retinoid such as tretinoin which acts on different levels; facilitating the removal of pigment by accelerating the keratinocytes’ turnover; enhancing hydroquinone penetration through the stratum corneum; and protecting hydroquinone from oxidation.13 Hydroquinone is a benzene (an organic chemical compound) and its molecular structure allows it to fully penetrate the skin barrier.14 Studies have shown that up to 45% of hydroquinone is systemically absorbed following topical use in humans and, within minutes of application, hydroquinone levels are measurable in urine.15,16 The molecular weight of hydroquinone is small enough that is may cross the placenta,16 which can be potentially damaging for a pregnant woman, though, due to the lack of human studies, this remains unproven.

Hydroquinone should only be used under medical supervision, as long-term use can lead to the condition exogenous ochronosis, a grey-brown or blue-black hyperpigmentation of the skin

This treatment requires commitment from the patient and an understanding that melasma can take months to years to treat, and requires appropriate long-term maintenance to reduce the likelihood of recurrence.17 Redness, peeling and itching is expected during this treatment – dermatitis with hydroquinone is reported in 25% of patients – so I would therefore recommend a patch test prior to initiating treatment. Despite controversy on the potential carcinogenic hydroquinone, at the low doses used cosmetically (2-4%), this treatment remains the gold standard in the management of hyperpigmentation. Hydroquinone should only be used under medical supervision, as long-term use can lead to the condition exogenous ochronosis, a grey-brown or blue-black hyperpigmentation of the skin.18 In pregnancy, both hydroquinone and tretinoin are deemed unsafe to use due to the potential toxic effects on the baby and the reported potential teratogenic effects of retinoids,19,20 so must not be prescribed for use.

Chemical peeling is the application of a chemical agent to the skin, which causes the controlled destruction of either part of the epidermis, or the entire epidermis, leading to exfoliation and the removal of superficial lesions. This creates the regeneration of new epidermal and dermal tissues.21 In melasma, chemical peels are used to remove unwanted melanin by causing a controlled chemical burn to the skin. Although a wide variety of agents are available for chemical peels, the choice becomes relatively limited when you are treating a patient with a Fitzpatrick skin type IV or above, due to the significant risk of developing post-inflammatory hyperpigmentation.22

Glycolic acid is the most commonly used alpha hydroxy acid (AHA) and is used frequently in treating hyperpigmentation. Animal studies, where relatively high doses of acid were used, demonstrated systemic absorption and resulting toxicity to the developing foetus, though one can argue that these findings cannot be extrapolated to human use, due to the significantly lower doses used in peels.23 Nevertheless, due to the lack of human studies in pregnancy, I would recommend against performing skin peels in pregnancy, particularly given that it is an elective aesthetic treatment that can be deferred post-partum.

Other topical ingredients that are beneficial in reducing hyperpigmentation include azelaic acid, arbutin, kojic acid, mandelic acid and liquorice extract.24 All of these ingredients are tyrosinase inhibitors and thus pigment suppressors. Salicylic acid is a beta hydroxyl acid, which can also be used to treat superficial pigmentation with good success, though again, salicylic acid use topically in pregnancy is not recommended by medical professionals, despite the low probability of systemic effect with the doses used in chemical peels.25,26

Kojic acid, a product derived from several species of fungi, as well as L-ascorbic acid (vitamin C) are deemed safe in pregnancy and lactation, as is AHA mandelic acid.27 This is because they have a large molecular size so do not enter the bloodstream, creating a systemic effect. This gentle AHA penetrates deep into the skin and breaks up areas of uneven pigmentation.28

When formulating treatment plans, patients should be informed that due to the limited data on the safety of many of the treatment modalities for hyperpigmentation, and the relatively short duration of wait in pregnancy, that the risk of treatment may not be justified. Melasma is more resistant to treatment during pregnancy because of the persistent hormonal trigger for development of the disease, and treatment is therefore routinely deferred until after delivery. Moreover, treatment may be unnecessary because melasma in pregnancy may be a transient affair; removal of the hormonal trigger after parturition may result in significant improvement.29 Emphasis should be made on prevention of pigment through appropriate sun protection including the use of sunscreens, hats, and staying out of the sun.