Exploring CBD as a Skincare Ingredient 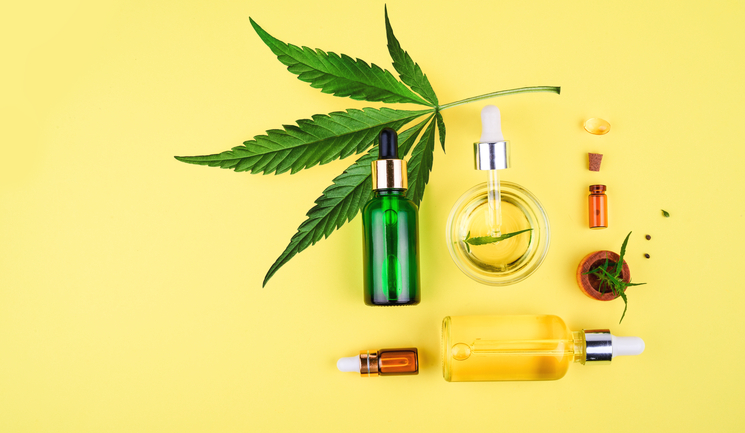 There has been an explosion of interest in recent years in the use of cannabinoid-based products. Cannabinoids (CBDs) are a diverse range of compounds that have been shown to be effective in the treatment of a range of different medical conditions, such as intractable epilepsy, chronic pain, asthma, and mood disorders.1,2,3,4 In vitro studies identified anti-inflammatory properties of these compounds, paving the way for research into the potential use of topical CBD-based products in dermatology.5,6,7 However, whilst there are already many creams and ointments available on the market, the evidence to support their usage is currently limited, and our understanding of the underlying physiology is still very much in its infancy.

Cannabinoids are a diverse class of active compounds that react with cannabinoid receptors and are divided into three main classes.8 Endocannabinoids are naturally-occurring compounds found in humans and animals. Phytocannabinoids are plant-derived compounds, with delta-(9)-tetrahydrocannabinol (THC), the main active ingredient in cannabis, being the most well-known. Synthetic cannabinoids, produced in laboratories, are a separate class that can be further subdivided into six different groups.9 With more than 110 identified cannabinoids, this is a complex chemical family, with a wide range of physiological properties.

Cannabinoids exert their effects primarily through two G-protein coupled receptors (GPCRs), CB1 and CB2.1,3 CB1 receptors are predominantly distributed throughout the central and peripheral nervous system, regulating memory, mood, sleep, appetite, and pain sensation.3 CB1 receptors are present in a range of peripheral tissues as well. The neuropsychological effects of many cannabinoids are thought to work via their actions on CB1 receptors. CB2 receptors, in contrast, have been coined the ‘immunomodulatory cannabinoid receptors’, mediating anti-inflammatory effects in peripheral tissues.10 Both CB1 and CB2 receptors are present on cutaneous sensory nerve fibres, mast cells, and keratinocytes, making them a prime target for dermatological research.11 However, further studies into cannabinoids have demonstrated a much more complex physiological profile than these two receptors alone. Cannabinoids can impact on a range of other GPCRs, transient receptor potential channels, and peroxisome proliferator activated receptors.12 Mice models with knockouts of both CB1 and CB2 receptors show cannabinoids can still exert potent immunomodulatory effects, highlighting the need for further research into this area.13

The underlying pathophysiology of acne is complex, driven by a strong inflammatory component, combined with the interplay between hormones, the immune system, infections, and the environment.15 Cannabinoids have been shown to exert anti-inflammatory effects within the skin microenvironment, and there is a lot of interest in the potential use of topical CBD-based products for the treatment of acne. Sebocytes, the sebum-producing epithelial cells found within the hair follicle complex and sebaceous glands, express CB2 receptors.16 Primary research has shown CB2 agonists and antagonists exert varied effects on lipid production and sebocyte apoptosis.

Whilst some compounds reduce lipid synthesis, and hence reduce acne flares, other compounds drive increased sebum production.17 Many phytocannabinoids, for example, stimulate sebum production, with acne noted to be a common side effect of excessive cannabis smoking.18 There is now preliminary trial evidence supporting the use of CBD-based products in the treatment of acne. A single-blinded 12-week trial looked at the effects of 3% cannabis seed extract cream on sebum production and erythema.19 There was a significant reduction in both measures in the test cohort, and the cream was well-tolerated. However, the trial was small, comprising only 11 test subjects, all of whom were male. Larger, double-blinded, randomised controlled trials with a representative testing cohort are required to fully investigate the potential use of cannabinoid-based therapies in the treatment of acne.

Robust trial evidence is again lacking, but promising initial research studies have been published on this matter

Atopic eczema is a chronic, relapsing-remitting inflammatory disease of the skin, characterised by dry itchy eczematous lesions. It is highly prevalent, affecting between 15-30% of children, and 1-2% of adults.20,21 Primary research has shown the topical THC application decreased the production of the inflammatory cytokines CCL2 and IFN-γ by keratinocytes and T cells, highlighting the potential of cannabinoid products to alter the inflammatory milieu in eczema.22

Robust trial evidence is again lacking, but promising initial research studies have been published on this matter. One study looking into atopic dermatitis in a paediatric population showed that twice daily application of the endocannabinoid Palmitoylethanolamide (PEA), for four to six weeks, produced statistically significant reductions in disease severity and patient-reported pruritus.23 A large, prospective cohort study involving 2,456 patients also looked into the use of a PEA-containing emollient cream over a period of four to six weeks.24 Again, there was a statistically significant improvement in patient-reported symptoms, decreased use of topical steroids, decreased loss of sleep-related to itching, and a clinical improvement in the degree of erythema, dryness and excoriations.

Asteatotic eczema is a common dermatitis manifesting as extremely dry skin, often affecting the elderly. It presents with a distinctive ‘crazy-paving’ appearance, which is predominantly on the shins. A randomised, controlled trial of 60 patients was carried out looking into the therapeutic potential of PEA and N-acetylethanol-amine (NEA) twice a day for 28 days.25 Both creams were superior in improving skin scaling, dryness, and itching over the period than a control emollient. No treatments are currently licensed, but the field is promising, and further large-scale trials will hopefully prove the benefits of cannabinoid therapies in the treatment of eczema.

Psoriasis is a chronic inflammatory skin condition, manifesting as clearly defined, red and scaly plaques, which is divided into several subtypes. Abnormally excessive and rapid cell keratinocyte turnover is driven by an inflammatory cascade within the dermis, involving the innate and adaptive immune systems.26 TNF-α, IL-1β, IL-6 and IL-22 all play a key role in stimulating keratinocyte proliferation. Preliminary laboratory-based research has shown cannabinoids can reduce keratinocyte proliferation in psoriasis animal models, but the mechanism is still very unclear at present.27

Cannabinoids trigger the conversion of a Th1-predominant cell profile to a Th2-predominant profile, mediating a shift towards immunosuppression, and thereby breaking the cycle of inflammation and proliferation.28 However, these effects do not appear to be mediated via CB1 and CB2 receptors, but rather via the PPARγ pathway.28 Whilst the first products are being generated for trials at present, it is likely that we are still some way off having sufficient understanding to generate effective treatment options for psoriasis.

Pruritus, the unpleasant sensation of the skin provoking the urge to scratch, is a characteristic feature of many dermatological conditions, and some systemic diseases. Given their distribution on key cells within the skin, it is hoped that CB1 and CB2 receptors may be effective therapeutic targets for the management of this debilitating symptom. CB1 and CB2 agonists reduce itch stimuli via the stimulation of inhibitory receptors on cutaneous sensory nerves, mast cells, and keratinocytes.29

Initial laboratory work has sparked interest; the application of PEA was shown to reduce histamine secretion in animal models, reducing the sensation of itch.30 However, whilst there has been lots of potential shown, we are yet to see any benefit in larger clinical trials. A single-blinded comparison study of 100 patients, assessing the effect of a PEA-containing lotion, did not result in any significant difference in pruritus intensity, quality of life or the cosmetic appearance of dry skin when compared to a control lotion.31 Translating promising primary research results into deliverable clinical benefit appears to be an ongoing issue for cannabinoids in dermatology.

The side effects of the systemic use of cannabinoids are well documented. Synthetic compounds in particular have been linked with anxiety, confusion, agitation, changes in mood, psychosis, nausea, diaphoresis, rhabdomyolysis, and acute kidney injury, amongst others.32 Excessive smoking of cannabis has been linked to periorbital darkening, hallowed-cheeks, premature ageing, hair loss, greying of hair, and acne.18 It is currently unclear what the side-effect profile of topical CBD-based products is. Allergy and cross-sensitisation to other products are a worry, and the most commonly reported side effects are dry skin, urticarial and pruritus.33 However, these were incidental reports, and the majority of topical CBD-based trials appear to report good tolerability. The role of cannabinoids in malignancy is currently very unclear. Both melanoma and non-melanoma skin cancers express CB1 and CB2 receptors. Cannabinoids have been shown to elicit pro-apoptotic and anti-proliferative effects in prostate, gastro-intestinal, and breast carcinoma studies, via various different mechanisms.34

THC has also been shown to trigger autophagy-dependent apoptosis in melanoma mouse models.1 However, in a different study, CB1 activation was also shown to trigger proliferation of melanoma cells in vitro.35 THC has also been shown to amplify the expression of Kaposi sarcoma-associated herpes virus, leading to the proliferation of endothelial cells and the appearance of Kaposi sarcoma in vitro.36 The potential pro-tumour impacts of cannabinoid therapy is an essential area of research that requires further investigation before these products can be used on a wider scale clinically.

There is widespread interest in the potential of CBD-based skincare products within dermatology at the moment. Whilst there have been many promising results from primary research with animal models and in vitro studies, we are yet to see large-scale, robust clinical trials proving the efficacy of cannabinoids for the treatment of dermatological conditions. Furthermore, the side-effect profile of these products, especially their impact on neoplastic development, needs further elucidation.