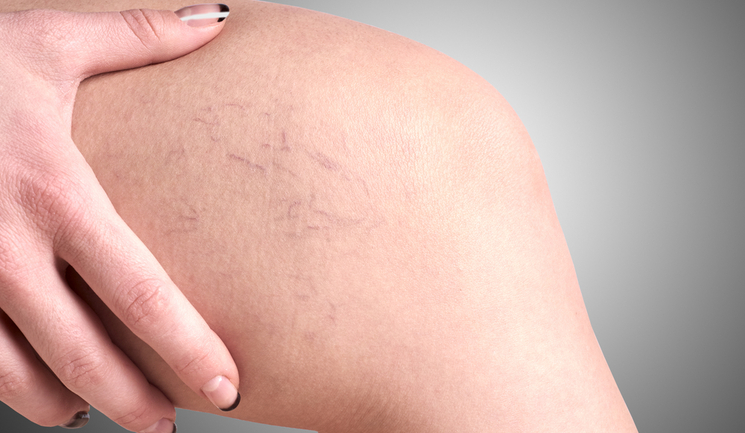 Varicose veins affect about a quarter of the UK adult population1 and may cause problems that can include leg swelling, severe skin damage, leg ulceration, as well as poor cosmetic appearance, which is the most common reason for treatment in my clinic.2

Until about 15 years ago, the main method of treatment was varicose vein surgery. However, there are now many non-surgical methods available to patients with a significantly shorter recovery time.

The focus of this article is foam sclerotherapy, which uses the well-established sclerotherapy principles to destroy the vein by removing its endothelial lining.

The underlying cause of varicose veins is a failure of the valves in the great and small saphenous veins, which are normally present in upper and lower limb veins. This permits abnormal downward flow towards the feet with gravity, causing the veins to increase in both diameter and length. As a result, this leads to the formation of convoluted, superficially lying veins.2

Clinical examination of observing and feeling the leg was previously the only investigation employed to establish the cause of venous problems. However, for the last 30 years, colour duplex ultrasound imaging has been used to identify the anatomy and physiology of the venous system to be treated.

Ultrasound imaging was introduced into the practice of phlebology (clinical management of vein problems) in the mid-1980s.6,7 It provides a black and white image of the blood vessels and other leg tissues, which indicates blood flow by a superimposed colour map showing the speed and direction of blood flow. It is also used to guide the application of sclerosants and thermal catheters to the correct location.8

Surgical treatments performed under general anaesthesia to remove varicose veins were the norm throughout the twentieth century. However, surgical vein removal incurs a large number of risks related to both general anaesthesia and the incisions, which may fail to heal quickly in some cases.9

Damage to cutaneous nerves may also occur and the incisions can leave permanent scars. A recovery period of two to four weeks is also required and surgery often leads to significant post-operative pain and bruising.

Several modern minimally-invasive techniques are now in use that are much less likely to lead to post-operative problems.

These methods are performed under local anaesthetic and most patients recover within one to three days of treatment.

All the modern treatments rely on placing an intravenous catheter in the saphenous vein and its tributaries to apply either heat or sclerosant foam to the vein. This requires ultrasound guidance since these veins lie 1-3cm below the surface.3

Sclerotherapy with liquids has been used for about 200 years. One of the earliest solutions used was alcohol, but this was painful. Foam sclerotherapy was first developed in the 1940s, long before ultrasound imaging was invented.10 A sclerosant foam can be readily prepared by vigorous mixing a small volume of liquid sclerosant with gas or air. The detergent sclerosants, sodium tetradecyl sulphate (STS) and polidocanol, are the most commonly used drugs to make sclerosant foam.

Once inserted, the foam works by removing the non-stick lining of the veins to allow for blood to stick to the inside of the treated veins which become blocked. Natural healing processes then completely reabsorb the successfully treated veins.10 In the UK, the drug licensed for the management of varicose veins by foam sclerotherapy is STS (Fibrovein).11,12

In 1995, a Spanish surgeon, Dr Juan Cabrera, published his experiences of modern foam sclerotherapy on which current techniques are based.13 In Dr Cabrera’s publication, ultrasound guidance was used to place an intravenous catheter in the saphenous vein at the knee, through which sclerosant foam was injected.13

Ultrasound-guided foam sclerotherapy is effective in the management of almost all varicose veins, from the smallest to the largest, whether the patient has undergone previous treatment or not.14 Foam sclerotherapy is less effective in very large saphenous veins (>12mm) so in these cases, laser ablation or surgical treatment may be more appropriate.

Foam sclerotherapy may be used in combination with thermal ablation techniques to manage superficially lying and convoluted veins that cannot be treated by heating. Endovenous thermal ablation methods as well as the use of bio-adhesive glue (‘superglue’) ablation are useful in the management of the main saphenous trunk. All other varicose veins, tributaries and accessory veins have to be treated either by phlebectomy (surgical removal of veins) or by sclerotherapy with liquid or foam.15 Ultrasound-guided foam sclerotherapy should be accomplished by an experienced medical practitioner.

My colleagues and I have evaluated Dr Cabrera’s technique and have since developed it, leading to several enhancements that have been described in a series of publications.16,17 The method is systematic and straightforward and takes around 20-30 minutes per session.18 The maximum recommended dose of foam sclerosant in one day is 15ml, which is usually sufficient to treat one leg.19 Where both legs are being treated, the second leg can be treated the next day or at a later date.

Sclerosant foam is effective in the vein in which it is injected; the foam extends into incompetent tributaries of this vein and these too are obliterated. This minimises the number of injections required to treat all varices in one leg. Foam is injected into the saphenous trunk via the cannulas previously positioned in the vein.

This allows the entire length of vein to be completely and effectively treated and will usually lead to effective obliteration of the saphenous vein. The foam spreads out into many of the varices and tributaries so that these are also treated. The treatment is concluded by the application of a firm compression bandage and stocking.

It is common practice to advocate the application of compression to the limb for a period of one to two weeks after the treatment.20

It is conventional to review patients two to three weeks after this treatment to check that the treatment has been effective in all veins. If an excess of thrombus is present, it can cause the veins to become tender, so it can be readily aspirated with a needle and syringe under ultrasound guidance following injection of local anaesthetic.

The successfully treated veins are slowly reabsorbed over a period of several weeks or months, depending on the size of the vein.21 After the treatment, there is usually resolution of the varicose veins and associated symptoms combined with an excellent cosmetic result. Adverse events during the recovery period include the development of phlebitis of the treated veins and brown discolouration over the veins.

Both are readily managed by aspiration of thrombus from the treated veins under local anaesthetic, combined with compression hosiery and, in any case, will usually resolve without intervention over a period of seven to 10 days.

NICE has published a review of ultrasound-guided foam sclerotherapy which provides a detail account of possible adverse events which may accompany this treatment.20 Residual telangiectases and reticular varices are usually managed by conventional sclerotherapy with liquid sclerosants, following conclusion of foam treatment in cases where patients require a perfect cosmetic outcome.21 Recurrent varices are usually minor and readily managed by further foam sclerotherapy. Freedom from varicose veins after five years is seen in 80-90% of patients.22

Good efficacy of ultrasound-guided foam sclerotherapy has been shown for five years following this treatment.14 Researchers studying 82 patients with venous leg ulceration due to varicose veins observed that 67 (82%) healed in a median of one month following treatment. Prevention of recurrence was also seen, with only 5% of ulcers reoccurring two years after healing had been achieved.23

One randomised study of 500 patients, which compared ultrasound-guided foam sclerotherapy with surgery and thermal ablation techniques, found equivalent efficacy concerning the clinical outcome after five years. Patients with varicose veins received one of four treatments: foam sclerotherapy, laser ablation, radiofrequency ablation or conventional varicose veins stripping. Ultrasound imaging and clinical assessments were done at annual intervals for five years. The clinical outcome was identical in all four groups, five years after the treatments had been completed.22

Heat can be applied to the vein through the intravenous catheter in the saphenous vein and its tributaries. The heat treatments include laser ablation25 and radiofrequency ablation,26 which apply heat to the saphenous vein from within to destroy it. In these thermal ablation methods, a heating catheter, either a laser fibre optic or an electrically heated, radiofrequency catheter, is passed along the vein from the knee to the groin or along the back of the calf to treat the small saphenous vein.

A large volume of local anaesthetic, typically 10ml per centimetre of saphenous vein, is injected around the vein to allow treatment without general anaesthesia. The laser or radiofrequency generator is switched on and the catheter is withdrawn slowly to ensure that heating is applied to the entire length of the vein to be treated.

This treatment is effective where the vein is long and straight, which is usually the case for the saphenous vein where no previous treatment has been done.

However, in varicose veins that have appeared after previous treatment or following an episode of thrombophlebitis, it may be impossible to pass the catheter along the vein so thermal methods cannot be used. In addition, many tributaries and superficial varices can be too convoluted for a long catheter to be passed.27

Any vein that lies close to the skin or a cutaneous nerve cannot be treated, since skin burns or damage to the nerve may lead to a region of numbness in the leg. Surgical removal of varices can be used as a supplement to thermal ablation, but this incurs the risks of surgical treatment noted above.

Bio-adhesive glue, mentioned above, has also been introduced recently to close the vein28 and a mechanochemical method uses a rapidly spinning wire to excoriate the inside of the vein in combination with injection of a sclerosant.29

The combination of ultrasound-guided injection and the creation of a sclerosant foam has allowed this treatment to be successful in a wide range of clinical presentations of varicose veins and it is as effective as conventional surgical treatment.

It may be used in combination with a range of thermal ablation techniques and recurrent varicose veins, while leg ulcer patients can also be readily treated using foam sclerotherapy. Only experienced practitioners should conduct treatments, and they can receive support and further updates from The British Association of Sclerotherapists.