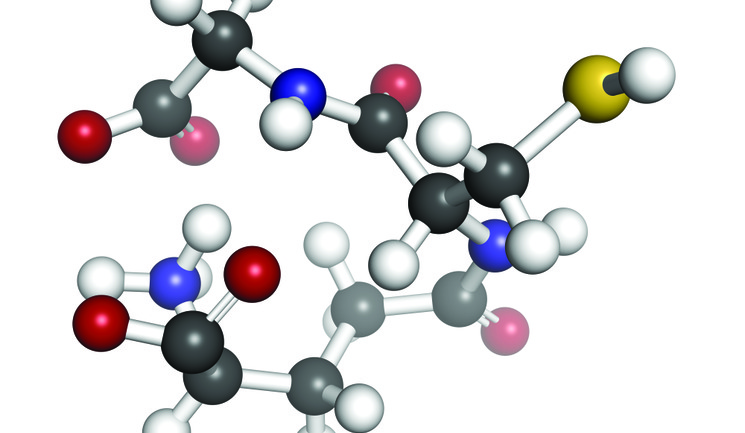 Over the past few years there has been a surge of interest in antioxidants for both general health and in skincare. Almost every new serum or cream released seems to contain reference, at least, to the anti-ageing benefits of antioxidants. One of the molecules responsible for much of the excitement in this field, and in medicine in general, is glutathione – a thiol tripeptide present in every cell of most animal species, as well as in some plants.1
From my experience and personal observation, there is interest in glutathione in the skincare arena for two reasons: its strong antioxidant activity and its reputed ability to reduce hyperpigmentation and lighten skin. The Japanese skincare industry is awash with glutathione soaps, creams and oral supplements to fulfil the latter purpose. Closer to home, there has been growing interest in glutathione as a supplement in topical skincare, as well as an intravenous or intramuscular supplement for its numerous supposed health benefits. Given the negative press that the depigmentation agent hydroquinone has received recently, (albeit in my opinion on fairly shaky evidence)2 there may be a place in the market for a new means of tackling hyperpigmentation. Does glutathione fill this gap? In this article I outline the basics of glutathione, its clinical uses, evidence so far for its use, and information on the way it has been introduced to the western skincare market.

In humans, glutathione is probably the most important endogenous antioxidant.3 It is produced from the conjugation of glutamate, cysteine and glycine in all cells, however it is found in greatest concentration in the liver, which also acts as a reservoir for glutathione. It exists in two forms: reduced, L-glutathione (GSH), or an oxidised form (GSSH), the former comprising 90% of the total pool of glutathione. In the oxidised state, glutathione is able to non-enzymatically reduce free radical species and reactive oxygen and nitrile compounds, acting as a substrate for conjugation and reduction reactions by virtue of the thiol group of the cysteine amino acid. Glutathione acts alone and in synergy with other antioxidants, such as L-ascorbic acid and alpha-tocopherol to neutralise these damaging molecules throughout the body. It is also involved in various cytochrome P450 reactions, DNA synthesis and repair, amino acid transport, iron metabolism, nitric oxide cycle regulation, protein synthesis, prostaglandin, leukotriene synthesis and many other intracellular processes. Thus, should glutathione levels be depleted or inadequate, a variety of systems and cell types may dysfunction as a result.4
The emerging importance of the role of oxidative stress in a substantial number of disease processes has resulted in a surge of interest in the use of supplementary antioxidants as an alternative or additive treatment in a variety of conditions as diverse as Parkinson’s disease, conjugation autistic spectrum disorders, various cancers, chronic fatigue syndrome, chronic obstructive pulmonary disease (COPD) and diabetes.5,6,7 It has also been reported that glutathione levels generally decrease with age, possibly contributing to the pathogenesis of Alzheimer’s disease.8
In the cosmetic industry, there has been some interest in the ability of glutathione to alter melanin production and thus be used as a skin lightening treatment, particularly in the Philippines and Japan, as mentioned earlier. The mechanism of this interaction is at present unclear, however, several mechanisms have been proposed. These include: the direct inactivation of melanocyte tyrosinase activity and transport, interruption of L-DOPA function, and mediation of a switch in melanin production from eumelanin production (which does not require GSH) in favour of the colourless pheomelanin, found in paler skin types.9,10 Thus, when GSH is found at high concentrations, production of colourless pheomelanin tend to be higher and at lower concentrations, eumelanin predominate.11

Although glutathione is a ‘non-essential nutrient’ in humans, (as it is synthesised by all normal cells from the raw amino acid components), there is evidence that a wide variety of wasting conditions including HIV, various cancers, chronic fatigue syndrome, sepsis and Crohn’s disease, among others,12 are associated with reduced levels of GSH (and presumably increased oxidative stress). As a result, glutathione supplementation has been proposed as a novel way of treating many of these conditions.
Given the fact that glutathione is a tripeptide, there has been much scepticism that it can be taken orally and absorbed without being completely broken down into its constituent amino acids. Witschi et al13 found that following oral ingestion, very little glutathione actually reaches the systemic circulation. They reported that the majority of the ingested glutathione is thought to remain in gut luminal cells or is rapidly hydrolysed in the circulation by extracellular membrane gamma- glutamyl transpeptidases.
There is very little evidence to the contrary, however, one non-randomised study indicated a rise in blood (but not liver) levels of GSH following oral supplementation in animal models.14 Given the lack of evidence, at present, parenteral administration of glutathione is considered the gold standard for delivery of glutathione systemically.
In Western Europe and the US, many oncology centres offer glutathione as intramuscular and intravenous supplements to patients undergoing chemotherapy, with evidence that it may increase length of survival, improve tumour responses and reduce neurotoxicity associated with platinum-based chemotherapy regimens, without reducing the efficacy of the treatments.15 Similarly, in the US, glutathione has been used as an intravenous supplement to attempt to reduce motor symptoms in idiopathic Parkinson’s disease, where reduced GSH levels associated with increased oxidative stress are heavily implicated in its pathogenesis.16 There has been some evidence of a mild improvement in those suffering from this condition in terms of motor symptoms.17 Inhaled glutathione has also been used in COPD and other lung conditions, however this use is not commonplace in the UK.18 In almost every study I am aware of, there seems to be no toxic dose or effects experienced with any form of glutathione.
With regard to skincare, there is very little evidence for any particular form of administration over another for the purpose of anti-ageing or skin lightening. The belief, however, that oral administration is less favourable than parenteral and topical approaches has led to the development of a few products that can be delivered in these ways.

Japan, Thailand and the Philippines lead the market with glutathione- based skincare, with relatively few products available in the UK. The numerous putative benefits of glutathione, including the antioxidant benefits on sun-damaged skin and reduction of hyperpigmentation via its effects on melanin production make it a potentially ideal constituent of anti-ageing skincare products, particularly for patients concerned with using products such as hydroquinone for hyper pigmentation.
The current problem is establishing the ideal topical dosage that can result in a similar outcome to other established treatments of hyperpigmentation for this purpose. As far as I have found, there have been no studies to elucidate this ideal dosage and none comparing glutathione to hydroquinone, for example, in the treatment of melasma or other forms of hyper pigmentation. Medik8’s CE-Thione is one of a small number of glutathione-containing products in the mainstream cosmeceutical market in the UK. This fairly advanced product combines optimal topical doses of vitamins C & E with the chirally correct L-glutathione in an easy-to-use serum. Perricone MD produces a similar treatment, Acyl-Glutathione. Other products containing glutathione such as ARCONA Desert Mist and Paula’s Choice Resist Super Antioxidant Concentrate Serum claim to have anti-ageing and hydrating benefits for the skin, but as with other products of this kind, there have not been any controlled trials as yet to prove their effectiveness.
In the UK, other mechanisms of delivery of glutathione to the skin are as part of combination peel treatments, most notably The Perfect Peel. The product was developed in the US, aiming to combine various peeling agents with glutathione to resurface the dermis and homogenise skin tone. The developers suggest that the combination of a self-neutralising mid-to-deep peel, combined with glutathione, would result in ideal penetrance of glutathione to the stratum basale and spinosum where the melanocytes are located.
In my own experience, this is one of the most effective peels for hyperpigmentation that I have used so far – it is extremely simple to use and the results I have seen are relatively impressive. Parenteral administration (IV/IM) of liquid or reconstituted powdered glutathione for hyperpigmentation is a much discussed and debated topic at present. However, there is little, if any, substantial evidence regarding the efficacy of this as a mode of delivery, as well as no explicit approval for this purpose existing in the UK.
Glutathione is available in the UK to administer intravenously and intramuscularly as a supplement, however, ideal dosage and dosage frequency have not yet been established and only one supplier (TAD) is approved by the MHRA. To date, there is only one, relatively limited, randomised controlled trial from Thailand showing an association between the use of exogenous oral glutathione and reduction in skin pigmentation. No randomised controlled trials supporting parenteral administration for reduction of hyperpigmentation has been undertaken as yet.19

Significantly more evidence is required before the use of glutathione can be convincingly marketed as an agent to reduce hyperpigmentation, particularly in relation to means of administration, dosage, dosage frequency and potential outcome measures. It does however, show significant potential as there does not seem to be any documented side effects to this treatment, and circumstantial and early evidence does indicate its effectiveness. In addition, the multiple, documented health benefits to this treatment add to the appeal of glutathione over other depigmentation products in my practice. I am sure there will be many interesting developments over the next few years, with this seemingly versatile molecule used in both skincare and in general medical supplementation.