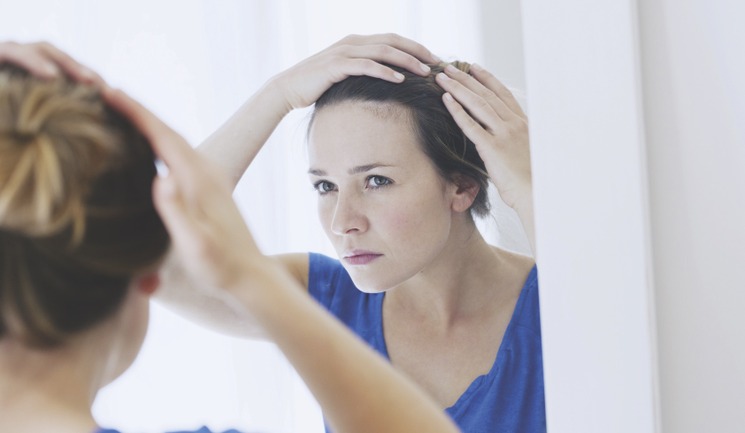 While male pattern hair loss is widely accepted as a normal part of the ageing process, the condition in women can carry a significant stigma. Society places a high premium on hair as part of a woman’s self-image, and hair loss can have serious negative consequences for quality of life. Stress and loss of self-esteem are common outcomes.1 The adverse effects on sufferers mean that effective treatment, or a cosmetic solution, can be a high priority in these cases. Fortunately, depending on the cause of the hair loss, there is a variety of ways to reduce or even reverse it.

There is a range of potential causes of hair loss in women. These can vary from congenital and dietary factors, to mechanical damage caused by grooming.

This is commonly referred to as male pattern baldness but is also the most common cause of female hair loss – around 40% of women will be affected at some point in their lives, rising to 57% in those aged 80 and above.2 From my experience of treating hair loss in women, I have noted that it does not follow the characteristic pattern of a receding hairline and thinning crown; hair is, in most cases, lost evenly across the top of the head. Androgenic alopecia is a hereditary component, largely determined by the EDA2R Androgen Receptor gene on the X chromosome.3 One specific, recessive variant of the gene is believed to trigger production of a highly potent form of testosterone known as dihydrotestosterone (DHT), which progressively degrades hair follicles to the points at which they cannot produce new hairs.4 The genes that cause male-pattern hair loss are also believed to be linked to the Y chromosome, causing female-pattern hair loss, which manifests as diffuse hair loss across the entire crown.4 Women are more likely to be affected if either parent suffered from the condition.4

A number of bacterial, viral, fungal and parasitic organisms can lead to hair loss. These are usually transmitted by physical contact with people, animals or objects that carry the organisms.5 One example is the Demodex folliculorum mite, a tiny invertebrate that feeds on sebum.5 Sebum is a waxy substance secreted by sebaceous glands in the skin and within hair follicles, which helps maintain good hair condition. It’s also rich in nutrients, making it an attractive food source for specialised mites.5 When a large number of mites are present, hairs can be deprived of nutrients, leading to early loss. Older people are more likely to carry Dermodex mites, with two-thirds of the elderly being infected.5

A range of drugs can induce either temporary or permanent hair loss. Chemotherapy is the best-known pharmaceutical cause but there are many others. Medicines used to manage chronic conditions such as coronary head disease or hypertension may also lead to progressive hair loss, particularly those containing warfarin,6 as can antifungals that incorporate fluconazole.7

There is strong evidence that diet can lead to hair loss. Deficiencies of zinc,8 biotin9 and iron10 can all result in thinning. Poor metabolisation of iron may have the same result. A diet high in animal fats (which increase testosterone levels)11 or with excessive vitamin A12 is another possible cause, as is general malnutrition.13

This is an autoimmune disorder, with no known cause, which induces dormancy in hair follicles. The effect can range from loss of hair in spots to the total loss of all body hair, but spontaneous remission is common.14 Hair follicles cycle through a number of phases of activity, one of which is a telogen (resting) phase where no hair is present. Because each follicle’s cycle is independent, only a small proportion is normally resting at any given time. Stress or psychological trauma can, however, trigger early onset of the telogen phase in large numbers of follicles, causing significant – and often very rapid – hair loss. This can occur following surgery, childbirth, fever, emotional stress or as a corollary to chronic illness or an eating disorder.15

There are several ways in which physical damage to hair can result in its loss. Women with cornrows or ponytails are often susceptible to traction alopecia, caused by pulling the hair with excessive force while brushing, braiding or fastening it. Individual hairs may be broken off above the cuticle, reducing volume, or the cuticle itself may be damaged. Trichotillomania, a disorder that involves compulsive pulling and bending of the hair, can cause permanent thinning due to repeated extraction of hairs at the root.16 Finally, radiotherapy applied to the scalp can damage follicles.17

Hair growth is cyclical, and loss of hairs is a normal part of this cycle. It becomes an issue when the rate of loss increases enough to cause significant thinning. There are several accepted diagnostic methods for abnormal hair loss:

Some forms of female hair loss are temporary, and will cease when the immediate cause is removed. Others may stem from permanent loss of working follicles and are not reversible. Management will depend on the cause and may involve lifestyle changes, medication, use of a hairpiece or even transplant surgery.

Because of the potential psychological impact of female hair loss, it is often necessary to begin managing the problem before a precise diagnosis of the cause has been achieved. Depending on the severity of the hair loss, the patient may be able to conceal it by changing their hairstyle. A hat or headscarf can also provide concealment, or a hairpiece can be worn. A common solution for male pattern baldness is to simply shave the head, a style that has lost most of its negative connotations in recent years. This approach is less likely to appeal to women, due to social expectations, but some may embrace it. Other management options will depend on the diagnosed cause. If a dietary deficiency is identified then remedying this – by adjusting levels of protein or other nutrients to bring daily intake within recommended norms – or reducing consumption of testosterone-promoting animal fat – may prove helpful.10 Where the patient is taking medication linked to hair loss, changing to an alternative drug can be effective. Drugs that affect androgen balance are particularly likely to lead to hair loss, as excess free testosterone increases DHT levels in hair follicles.21 Switching to oral contraceptives from another form of birth control may be indicated in these cases.22 Alopecia areata can be temporarily reversed in around half of cases with corticosteroids such as prednisone, administered in oral form.23 Anthralin may also be effective, although evidence on this is not conclusive at the moment.24 Long-term, daily treatment with minoxidil can promote hair regrowth.25 Minoxidil is more effective when treatment begins shortly after the onset of hair loss; the longer follicles have been inactive the less likely it is that minoxidil will be efficacious in stimulating regrowth. However it will usually be effective in preventing further hair loss.26 Treatment must be continued indefinitely but side effects are usually mild, and are generally associated with the small minority who are allergic to propylene glycol. The most common side effects include itching or redness of the treated areas, or eye irritation. Minoxidil may be used to treat both alopecia areata and androgenic alopecia. In severe cases of permanent hair loss, where significant scalp is exposed, hair transplantation surgery offers a permanent solution. This procedure can be carried out under local anaesthetic and involves removing small plugs of skin, each containing a number of follicles, from unaffected areas of the scalp. These are then implanted into bald areas. The hairs transplanted with the plugs will fall out shortly after the procedure but then regrow permanently.27

While hair loss is generally associated with men, it also affects a large number of women, and the impact on quality of life is much more profound in this patient group. While acceptance of hair loss is relatively simple for men, expectations placed on women about their appearance make either clinical management or a cosmetic solution essential for most patients. Permanent reversal of hair loss is difficult to achieve without surgery, although there are a range of effective treatments available, which can prevent further loss and may promote regrowth in many cases.