Improving the Appearance of Cellulite 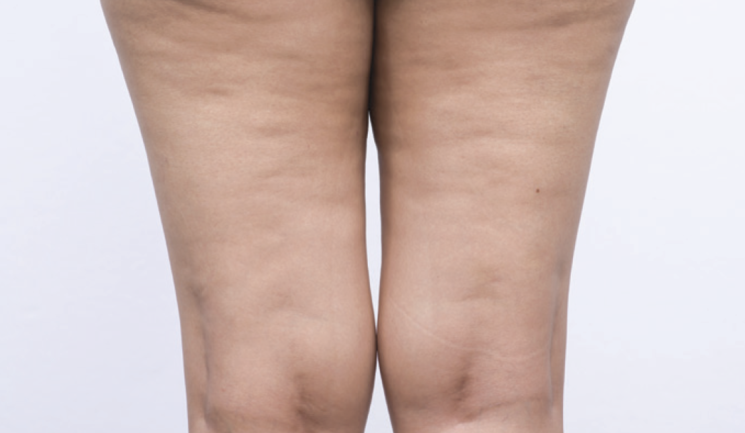 Put simply, cellulite is the appearance of dimpled skin, which presents mainly on the outer thighs (Figure 1). Its most minor manifestation is dimpling, which can be induced by grasping the skin and underlying tissue between two hands and pushing them together or, alternatively, by voluntarily clamping the underlying muscle. This is grade I, according to the Nürnberger and Müller scale.1 Nürnberger and Müller proposed the first clinical grading scale for cellulite, dividing the condition into three grades, as described in the table below (Figure 2). At this point I should point out that cellulitis is of course nothing to do with cellulite and is inflammation and infection of the skin and underlying fat.2

To understand the appearance, we need to understand the anatomy of the skin and underlying fat. There are two layers of fat under the skin constrained in compartments by strands of connective tissue, made up of collagen, which gives it structure so that the fat does not ‘flop about’. The most supportive strands occur in the palms and soles, where no movement of the soft tissue can be tolerated.3

The fat cells are grouped into lobules by connective tissue, which are themselves grouped into larger pearls and sections, and these are all held together with connective tissue. There are two layers; the deeper layer has larger sections arranged like segments of an orange, which is separated from the superficial fat layer; this is made of smaller palisading columnar fatty pearls. Adults have a fixed number and distribution of fat cells, which determine body shape and type.4 They do not increase in number with weight gain, but they do get bigger, bulging out from the connective tissue restraint, to give the effect of quilting of a mattress (Figure 2). Another cause of increased tension, causing bulging of the connective tissue, is an increase in tissue fluid, as in lymphoedema. This is an accumulation of tissue fluid due to a deficiency in the lymphatic drainage system.5,6

A large percentage of females are thought to have cellulite, and it is normal. It is rare in men and this is thought to be because there is less fat in the areas where we see cellulite. Additionally, there is a different arrangement of the fatty pearls in the superficial layer, which are arranged flatter, rather than as vertical columns.7 The influence of female hormones is mainly on the fat distribution in the areas of secondary sexual development. It is at puberty that girls develop fat over the buttocks, hips and lower abdomen and this is where cellulite most commonly occurs.

In my clinic, I rarely see cellulite in dark skin types and I believe there are two reasons for this. The first is that the stratum corneum is much more compact and more elastic,8 which also is a reason that, apart from the pigmentation, we see less effects from ageing. The second, is that the subcutaneous tissue contains much more connective tissue.8 As surgeons, we are aware of this, as performing liposuction procedures in dark skinned patients is generally much harder work, requiring more time due to this connective tissue.

Clearly, the more fat a patient has, the more obvious cellulite will become, as tension rises within the subcutaneous fatty pearls.

Treatments can clearly be directed at reducing tension within the subcutaneous fatty pearls and by tightening the elasticity of the skin. As a surgeon who specialises in liposuction, I will focus this article on the surgical treatment of fat, as well as the surgical and non-surgical approach to skin tightening.

Immediately after I introduced liposuction into the UK 35 years ago, I was besieged by patients asking for treatment of their cellulite. Cellulite is more common in overlying localised fatty deposits of the hips, buttocks and abdomen, however, I was also getting requests from slim patients with just a little bulge of fat. At this point, it looked possible that by reducing the tension in the fat, the mattress effect would also be reduced. However, this turned out not to be the case, because we were reducing the deeper layers of fat, rather than the superficial. Liposuction is used to improve the general shape and a proportion of fat removed is processed and reinjected immediately under the dimples, as close as possible to the skin. The superficial reinjection of some of this processed fat is counter intuitive, but nevertheless, can be very helpful in the treatment of big dimples and contour defects which I come across all too frequently from the inexpert use of liposuction. I think it does improve cellulite to a small degree, but I have no evidence to support this.

Improving the shape does make patients very happy and often the problem of cellulite becomes less acute. Although the contour of the body can be improved with liposuction, the quality of the skin will remain unchanged. For practitioners who are not trained in liposuction, it’s worth knowing someone who you can refer liposuction cases to in your local area.

Surgical skin tightening is highly effective, but only suitable in a limited number of cases where there is a large laxity of skin. This surplus skin is simply excised, removing the worst of the dimples, allowing the remaining skin to be sutured up much tighter, making the dimples less obvious. This is most effective for the buttocks, outer thighs and inner thighs, however the effect is limited in its extent. During consultation, patients typically pull up the skin of their thighs to show how all the dimples down to the knees are improved, but in practice, the improvement will be limited to the upper part of the thigh. This is because the subcutaneous fat and skin of the thigh is heavy and have been mobilised by liposuction and then pulled upwards against gravity. One is trying to hide the scars high up in the groin and under the buttock fold. If the outer thigh is also treated, then the scar needs to be extended up in the line of a G-string, where it will be more visible. For many people, the improvement is well worth a scar, which will eventually fade after a year or so.

The division of the connective tissue bands, causing the mattress effect, is logical and perhaps can be termed minimally invasive. In its simplest form, it is subcision, which has been used on and off for many years. In a study by Hexsel, 232 women were treated using this technique with subjectively favourable results in 79% of patients who stated they were satisfied.9 However, there was a certain amount of reported pain, bruising and haemasiderosis in most patients. Recently, subcision has been standardised and marketed as Cellfina and has produced similar good results.10 From speaking to exponents of Cellulaze, a laser device that uses heat energy to cut the connective bands, they make an interesting point that these lasers introduced immediately under the skin are doing the same subcision but in addition can cause contraction of the connective tissue support and therefore may give an even better improvement.

Less invasive treatments are popular, and logically the skin tightening of radiofrequency techniques, ultrasound and non-ablative lasers are currently the most promising. Radiofrequency in its various forms gives a minor, but for many, worthwhile improvement.

A more sophisticated technique is the use of the Nd-YAG 4410-nm wavelength device. A thin laser fibre is threaded under the skin and, firing sideways, divides these same connective bands, releasing skin that was being pulled downwards, creating the dimples. In addition, the heat stimulates collagen and elastin production to thicken and tighten the skin. This gives consistently moderate, but worthwhile improvements, even though the very long-term results have yet to be assessed. It is difficult to prove if the even less invasive lymphatic massage and endomology (a mechanical massaging, rolling and sucking of the skin’s surface) makes a difference as there are not enough studies to support it, but this does not mean that patients are not content.

Zerini et al., from Sienna, reviewed 73 articles and found that many of the topical treatments showed surprisingly good results at the end of treatment time, but as with so many of these studies, the follow-up was short.11 These applications were a combination of many ingredients including tetrahydroxy, propyl, ethylene, diamine, caffeine, carnitene, forskolin and retinol. After 12 weeks, 79% of patients showed improvement in their skin condition. Caffeine was probably the most potent compound preventing excess accumulation of fat in cells. It also has potent antioxidant properties and protects cells against UV radiation and slowing down the process of photoageing of the skin. It also increases the microcirculation of blood and stimulates the growth of hair.12

No single treatment has shown to be significantly effective. It may be that the answer is in a combination of treatments to achieve the optimum result. We do, however, need much better randomised, controlled studies before we can make fully justified recommendations.