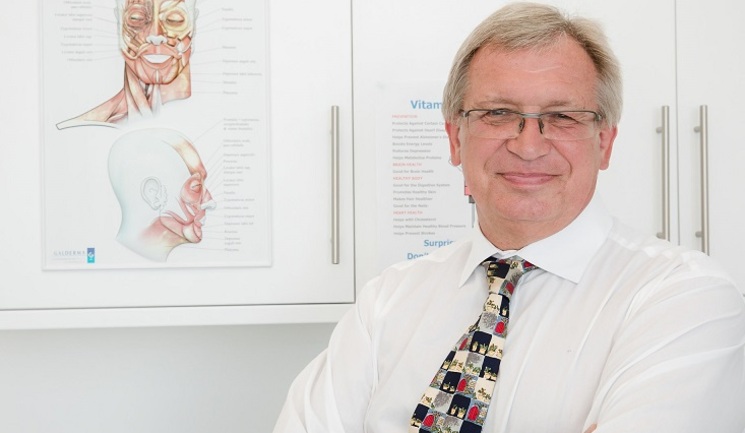 “I lived in West London, trained in North London, I’m a GP in Chiswick and I have a clinic here in Richmond, which is considered as Greater London – I think I’ll always be based in or around London,” says Dr Andrew Weber. “I really enjoy having my clinic in Richmond. When aesthetics started, Harley Street was where most of the demand was, but now a lot of reputable clinics and well-respected practitioners are established in the suburbs of London.”

Dr Weber started his higher education at Nottingham University, studying mechanical engineering, before transferring to a medical course, which became of far greater interest to him. He says, “I’ve always been very scientific but wanted to pair this with a more humanistic approach, in what I consider a hugely purposeful and caring profession. I went to the Royal Free Hospital School of Medicine in London and then went on to study the General Practice Vocational Training Scheme. He continues, “General practice is great, as well as being challenging, it provides a broad base of knowledge. I worked in areas of special interest such as surgery, family planning, diabetes and I even ran an erectile dysfunction clinic for about five years as an associate specialist.”

Dr Weber joined a GP Partnership in Chiswick, which became Chiswick Family Practice, after completing his vocational three year rotation training. In 1999, Dr Weber set up Bodyvie with his wife, Barbara Weber, after identifying a gap in the market. In terms of managing general practice with his medical aesthetics clinic, Dr Weber says, “I’ve decreased my commitment to general practice over the  last couple of years, aesthetics is now at the forefront. It’s a great balance being able to combine the two, keeping my work varied and interesting. I love the interaction and helping people in different but meaningful ways.”

"In our clinic, it’s important for patients to have a doctor for life and a long-term relationship"

When asked what his biggest accomplishment is so far, Dr Weber says, quite simply, “Having Bodyvie. We’ve  always adopted a general practice ethos of continuity; you’re [the practitioner] there for the long term. In our clinic, it’s important for patients to have a doctor for life and a long-term relationship, which is what we have always tried to retain.” Explaining how he believes his clinic achieves this, Dr Weber adds, “We remain an independent business. We aren’t a chain and haven’t franchised so we control our identity and ethos which our patients value.”

As well as working in general practice and medical aesthetics, Dr Weber has experience in the field of medico-legal work. He recalls, “The Medical Protection Society (MPS) approached me 15 years ago, to provide expert reports regarding cases of litigation. The field of medical aesthetics was in its infancy at the time with few specialising in the area. I provided reports primarily for the defence, for MPS. Reports mostly related to dermal fillers and injectable treatments.”

Reflecting on how this has helped his career, Dr Weber explains, “It was beneficial as I had to do a lot of research. You have to back everything up with facts and find supporting papers, studies and statistics, so I learnt a lot.”

“If you’ve had complications and dealt with them, that’s a good thing”

Speaking of his favourite treatment to administer, Dr Weber says, “Botulinum toxin is one of my favourites as it provides instant gratification and patients can notice the difference in just a couple of days. It’s nice and simple but it’s also not as easy as everyone thinks as, although the anatomy is very similar, everyone is different. For example, the strength of people’s muscles and formation varies a lot, which is important to be aware of as a practitioner.” He adds, “You have to adapt your treatment methods, as the amount of product and distribution patients will need can fluctuate.”

Being the medical director of his clinic, Dr Weber interviews new staff regularly. When asked what he looks for in a practitioner, there’s one question he always has. “We ask interviewees one simple question – ‘Have you ever had any complications?’ A lot of them will actually say no. The only reason you will never have had complications is if you haven’t done enough treatments or you’re lying. It’s very simple, if people are honest, I’m more likely to hire them.” Stressing the importance of this, he continues, “Practitioners shouldn’t be hesitant about discussing complications. If you’ve had complications and dealt with them, that’s a good thing, and it is information you should be passing on to others in the specialty.”