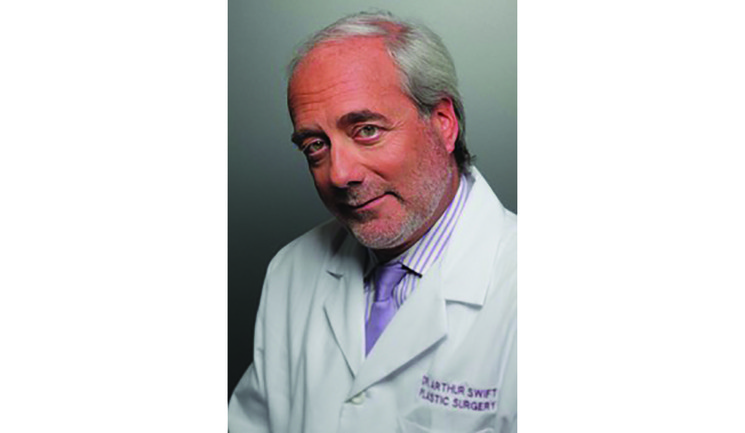 “It was unusual for a plastic surgeon to get involved with skin care,” recalls Dr Arthur Swift, as he details the integration of aesthetics into his surgical practice in the late 1980s. “To me it made sense; I was pulling and tightening skin but commenting to my colleagues that we weren’t doing anything for its quality.” Dr Swift, now one of the most respected practitioners in aesthetics, continually aims to optimise both the patient’s experience and outcome. Dr Swift’s journey towards plastic surgery began in the trauma unit at Jackson Memorial Hospital, Miami. Due to long hours, a two-month stint in trauma wasn’t recommended, so instead he spent his second month training in plastic surgery. Under the supervision of Dr Ralph Millard, often referred to as a leading plastic surgeon of the 20th century, Dr Swift fell in love with the craft. “I loved the diversity, the creativity and the surgery,” he explains.

Completing his plastic surgery residency at McGill in 1986, he returned to Miami to complete an aesthetic fellowship with Dr Millard. Settling in his hometown of Montreal, Canada in 1987, Dr Swift began offering both reconstructive and aesthetic plastic surgery consultation services. Consulting at about 23 clinics, he spent most of the day in his car. The effort paid off and in 1993, after establishing an excellent reputation, Dr Swift opened The Westmount Institute of Plastic Surgery. To better serve his patients, Dr Swift kept up with industry innovations, which soon lead to the incorporation of less-invasive aesthetic treatments to his clinic.

Initially he offered these treatments as a free, additional service to his surgical interventions. Soon, however, there was an apparent interest for less invasive therapies as stand-alone procedures. “My one afternoon of doing injectables every two weeks was now becoming more of a demand,” he explains. Dr Swift began dedicating a day a week to non-surgical facial enhancement to complement his plastic surgery practice. Simultaneously, Dr Swift’s reputation began attracting patients disappointed with results from other clinics. He explains, “It seemed as though practitioners were taking up non-invasive approaches but didn’t really have a clear concept of what their goals were. They understood that they had to fill areas that were depleted and soften lines that were dynamic, but they didn’t know when to take their foot o the gas pedal.”

After seeing many over-treated patients, Dr Swift felt he needed to teach restraint and aesthetic ideal. “There has to be a ‘sweet spot’ – where individual attractiveness is optimised – not a different look, just the best version of the patient,” he argues. “I began looking
into concepts of beauty and soon discovered a commonality and universal concept of beauty.” Dr Swift looked to the renaissance artist and inventor Leonardo Da Vinci for inspiration. He learnt that Da Vinci, along with other artists and architects, incorporated the ‘Golden Ratio’ – a mathematical quantity represented by the Greek letter Phi – within their work. “Even the Ancient Greeks insisted that mathematics was at the root of all things beautiful,” explains Dr Swift. He began applying this concept to his work, creating an injectable method called ‘BeautiPHIcation’. Invites to discuss BeautiPHIcation at conferences soon arrived, surprising Dr Swift with the overwhelmingly positive reaction it received.

Today, Dr Swift travels the world during his time off, sharing and exchanging knowledge with other practitioners. For aspiring aesthetic professionals, he emphasises the importance of being adaptable and optimising overall patient experience. Dr Swift is clearly passionate, and makes it his goal to impassion others when speaking at events. He says, “There’s no reason why you can’t educate and entertain at the same time. I constantly remind the attendees that they should be passionate about what they do or stay home.” Regarding the aesthetic profession, he adds, “There is nothing shameful about being in the quality- rather than quantity-of-life business. We are truly blessed to do this day-to- day – helping individuals, improving self-esteem and making positive changes to their lives.”