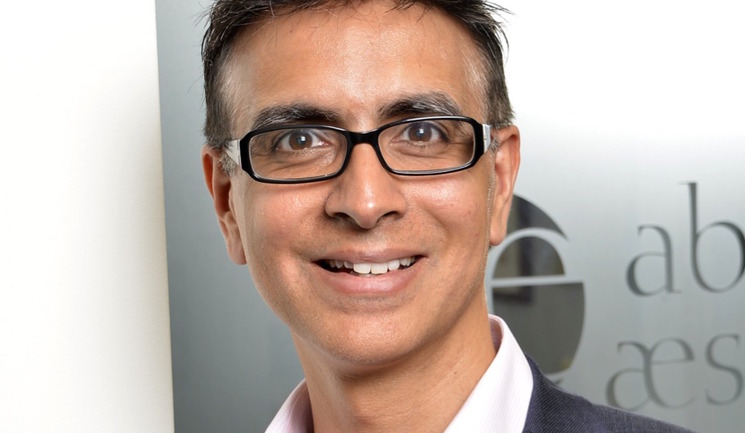 With more than 3,500 current patients over four clinics and a four- week waiting list, Dr Kuldeep Minocha is one of many in-demand aesthetic practitioners. Yet, unlike those who have dedicated their entire medical career to aesthetics, his love and devotion to the specialty only began in 2006.

“I’d been a GP partner for 16 years after studying medicine at Southampton University in 1986. But working for the NHS was changing a lot,” Dr Minocha says. “It wasn’t about the doctor/patient relationship anymore or providing the best standard of care for the person sitting in front of you – things were changing, it became more about rationing care.”

As such, Dr Minocha tried to divert his expertise into something else and find a new vocation within medicine. “I did some work with Paul McKenna, I was one of his weight-loss consultants. I also became a diabetic specialist. I did things I could devote my time and energy to,” he explains.

It wasn’t until he began a botulinum toxin and dermal filler course in 2006, however, that he found his niche. “I instantly thought ‘wow!’ this is interesting. After a three-hour course on each, though, I didn’t have the confidence to go out and inject someone,” he says. Instead Dr Minocha started attending Q-Med’s (now Galderma) injectable courses and, in that first year, turned up to approximately 20 training sessions. “One of the trainers even joked, ‘Do you know that you could actually give these courses yourself now? Why are you here?’” he laughs, adding, “I told her, ‘Because I want to be the best I can be, I want to learn as much as possible.’”

I loved what I did within the NHS, but now I get to see people who choose to see me, I get to help them feel great about themselves

After building his confidence, Dr Minocha began decreasing his time spent in general practice and focused more on establishing his aesthetic practice. Three years ago he joined Absolute Aesthetics, and as a result of that, was exposed to the world of public relations. “I built-up my client base on word-of-mouth recommendations and never needed to do any sort of promotion,” Dr Minocha explains, adding, “I’m a very old-fashioned GP at heart; I’m not a business man or entrepreneur and before I joined Absolute Aesthetics I didn’t even have a business card! I warned the team, ‘Don’t expect me to be doing this and that (promotion), just give me my patient and I’ll do my best for them.’”

Ethics are very important to Dr Minocha and, he claims, no amount of money or prestige can persuade him to treat patients who don’t need it. “I once had a lady who came from Abu Dhabi, jumped straight on the couch and said, ‘I’ve come for my Botox! I’ve just flown over as my daughter’s getting married in six weeks and I want to look my best.’” He explains that he had only treated her ten weeks ago and felt it was too soon for her to undergo more treatment, as she simply did not need it. “I sat the patient down, we looked at her mirror reflection together, as well as before and after photographs from her last treatment. I then reassured the patient that the treatment was working and it would be unnecessary for her to have any more treatment so soon after. She respected my honesty and joked, ‘Oh, you and your ethics!’ Patients often lose perspective quickly so when an opportunity such as this presents itself, it’s important for practitioners to act appropriately and do what is best for the patient.”

Dr Minocha enthuses that taking part in the Galderma Proof in Real Life Campaign, which aims to build consumer trust in aesthetics, has been his greatest achievement. The campaign involved ten identical twins, with one sibling from each pair been treated with either Restylane and Restylane Skinboosters, or just one of the products, with the aim of demonstrating the natural-looking results that can be achieved through aesthetic treatment. “It was an amazing, emotional journey. Actually seeing people in real-life, in three- dimension, with their untreated twin next to them, getting an idea of the quality and texture of their skin – that was remarkable!”

Reflecting on his career, Dr Minocha says he wouldn’t do anything differently, “Since the age of seven, all I wanted to be was a doctor. I loved what I did within the NHS, but now I get to see people who choose to see me, I get to help them feel great about themselves. I’m not driven by money; my drive for coming to work is producing incredible results and making someone feel amazing about themself. If I get paid or not, I don’t really care. It’s very much about what we’re doing for the patient.”

Do you have an ethos or motto that you work by?

Always be true to yourself and try to be as objective as possible. Always have the strength to say ‘no!’

Do you have any words of advice for people who are looking to get into the industry?

Master one or two skills, rather than trying to be a jack-of- all-trades.

Being involved in a journey that is able to help someone’s self confidence and how he or she feels about themselves is so rewarding. Most of my patients are women, most are in their 40s and most of them are going through a phase in life where they’re trying to redefine themselves as to who they are. Being in this industry creates such positive energy; you do a treatment for somebody and when they come back for their review they look amazing and they feel amazing.