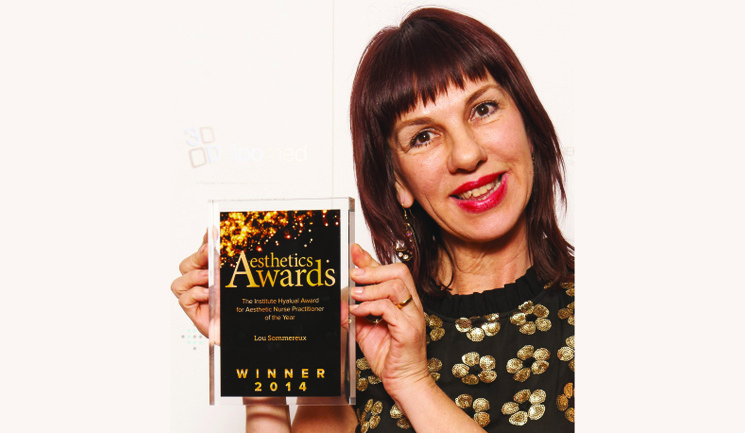 “I had no ambition to be a nurse,” admits Lou Sommereux, who went on to win the accolade for Aesthetic Nurse Practitioner of the Year at the 2014 Aesthetics Awards. Growing up in Cambridge, she explains, “I’m sadly of a generation where careers advice for women wasn’t very good. My options were limited to secretary, teacher, mother or nurse.” Sommereux chose the latter route. “I completed my training at the Middlesex Hospital in 1978,” she explains, “before moving back to Cambridge and working at Addenbrooke’s Hospital before spending five years working at Fulbourn Psychiatric Hospital.”

In 2001, however, Sommereux heard that models were required for botulinum toxin treatment. She volunteered and, after a successful treatment, proceeded to research the aesthetic specialty. In 2002 she attended IMCAS in Paris, and explains her aesthetic career spiralled from there.

After completing her training, Sommereux practised aesthetics in 11 beauty salons across Cambridgeshire. In 2002 she set up a clinic base in rented premises, before opening Cosmex Clinic. She explains that she was lucky to receive informal additional training from one of the three plastic surgeons o ering non-surgical procedures in Cambridge. At the time, she says that she was the only nurse practising aesthetics in the area. “Consultant plastic and reconstructive surgeon Mr Per Hall was very supportive and mentored me at the beginning, when I really needed it,” she says. “I think every one should ‘buddy-up’ with like- minded practitioners to develop your own support network within your aesthetic community.”

This notion is clearly something Sommereux carries very dear, demonstrated through her active involvement with the British Association of Cosmetic Nurses (BACN). Having been a member of the Royal College of Nurses’ (RCN) aesthetic forum, which she describes as the “forerunner” to the BACN, Sommereux says she was delighted to be asked to join the BACN’s board at its conception in 2009. She went on to become vice chairperson, and regional
lead for East Anglia. “I thought, what an amazing opportunity to be involved in driving aesthetics forward and making it a recognised nursing specialty,” she explains. Due to her clinic commitments, Sommereux has very recently stepped down as vice chairperson, but will continue her role as a regional lead. She says, “I still feel very passionate about the BACN – if you cut me in half, I’d have BACN and aesthetics written right through me!”

One of Sommereux’s biggest achievements stems from her involvement with the BACN. In 2013, the RCN published and accredited the BACN’s Integrated Career and Competency Framework for Nurses in Aesthetic Medicine, which was updated and re-accredited in 2014. Sommereux co-wrote these competencies along with other BACN members, offering guidance and advice to beginner, proficient and expert aesthetic practitioners. “They’re the first and only competencies, which are accessed both nationally and internationally,” she explains. “And while they will need continuous updates when new treatment modalities are introduced, writing them has been a huge achievement for me, both personally and professionally. I think the BACN has put the rubber stamp on bringing nurses together.”

Sommereux credits winning an Aesthetics Award last year with having a hugely positive influence on both her marketing potential and her professional reputation. “Patients are telling me they’re privileged to come to my clinic, which is such an honour,” she explains. “It’s been wonderful to be recognised by my peers and colleagues, and I think it has made me stand head and shoulders above other clinics in the area. This year, I’d like to put my clinic forward for best reception team as my winning has been a very positive experience for us.”

Although she has spent most of her aesthetic career o ering injectable treatments, Sommereux’s desire to learn about new treatment modalities is ongoing. “I’m 58 this year and people ask if I’m going to retire, but no, that word’s not in my vocabulary. There’s just so much I want to do and learn.” And with a loyal, ever-expanding patient-base, as well as a passion for progression, it seems unlikely that Sommereux, who started out with no solid ambition to be a nurse, has any intention of slowing down.