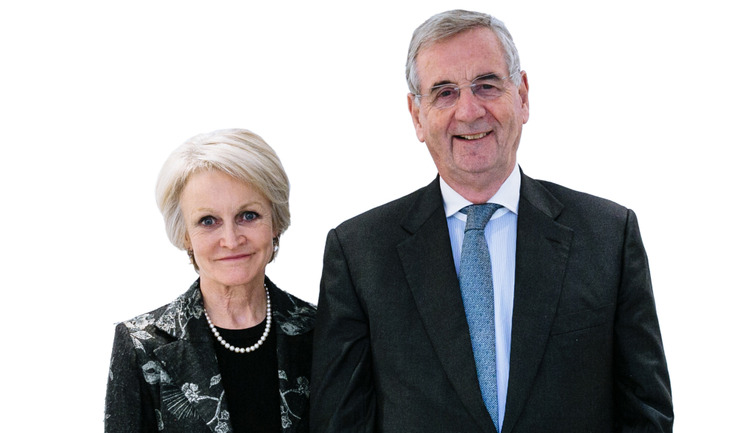 Mr Bryan Mayou and Dr Susan Mayou reflect on their surgical and dermatological careers, as well as their achievements in aesthetics

Mr Bryan Mayou grew up in Warwickshire and, like his father, always wanted to be a doctor. However, he never knew that he would succeed in bringing innovative treatments to the UK. “I went to Epsom College as a child, which at the time was basically a school for doctors’ children, so I was surrounded by medicine and everyone close to me knew I was really fascinated in surgery. Years later, after bringing liposuction to the UK, it’s now my favourite treatment,” he explains.

After graduating from the University of Birmingham, Mr Mayou completed a Fellowship at the Royal College of Surgeons and then became a consultant plastic surgeon in the NHS. “Surgery was always enormous fun,” he says, “In the early days I worked very hard, for long hours, and I was on duty all of the time. I was very happy because I enjoyed what I did. I always found reconstructive plastic surgery fascinating because it was constantly developing, with so many new techniques and procedures, such as microvascular and endoscopic surgery and lasers.”

Reflecting on the cosmetic surgery and aesthetic specialty’s developments, Mr Mayou says he is thrilled to have experienced such ‘dramatic changes’ in the treatment possibilities. He explains, “I have seen both the surgical and the non-surgical technologies develop really rapidly since my training. The rise of fillers to me was a surprise as the technology progressed so fast, but I have now used all sorts of fillers in my lifetime and I find that they are particularly good for damaged noses, where surgery is particularly difficult. I also find it interesting that certain surgical procedures are quite non-existent now, such as the surgical brow lift. I thought that would be a very prominent treatment but most practitioners use toxin, so I haven’t done one in many years!”

As mentioned, Mr Mayou has played an important part in introducing new techniques to the UK, with liposuction being his most cherished accomplishment. He elaborates, “I first heard about liposuction in 1982 through my next-door neighbour. At first, I thought it went against all the principles of plastic surgery and I didn’t think it would work – you’re just inserting a ‘sucker’ that blindly takes out fat, there is going to be bleeding and bruising, and it seemed unlikely you would get a nice smooth result. But one day, she told me she knew it worked because she had gone to France to have the treatment herself! So, I wanted to investigate.”

Mr Mayou says that he later arranged for French and Swiss surgeons who were pioneering the techniques to visit the UK to teach him and other plastic surgeons. “We didn’t have the instruments in 1983, so I had to work with an instrument maker so we could do it. Liposuction became extremely useful in reconstruction and cosmetic surgery and I used it quite a lot. It was great because we could use it for really difficult-to-treat cases, such as gynaecomastia and ankles – which gives marvellous results.” Mr Mayou also took part in research, and set up a private laser and dermatological surgery unit called Laserway with dermatological surgeon Mr Neil Walker. He explains, “We were doing a lot of interesting research of vascular and pigmented birthmarks and tattoo removal. We did studies on children with big birth marks and big moles that might cover half the face or half the body. We would treat their skin surgically and with lasers – I always had a big fascination with lasers and we introduced the pulsed dye laser and ruby laser to the UK.”

Working in private practice was something that Mr Mayou loved as he enjoyed the freedom of doing more of what he wanted. “Opening our own practice is something my wife, Dr Susan Mayou, and I really wanted to do. So, in 2007, we opened The Cadogan Clinic in Chelsea and, as Susan is a consultant dermatologist, it was perfect because we each have different experiences and knowledge,” he explains. In 2012 the clinic expanded and moved down the road. It now has three surgical theatres, six aesthetic treatment rooms, seven consulting rooms, and around 50 employees. Mr Mayou adds, “We have a comprehensive facility and provide a full service with experts in surgery, dermatology and other fields such as cosmetic podiatry, vascular surgery, gynaecology and non-surgical aesthetics. We have everything under one roof and when it comes to the aesthetics side, we get the doctors, nurses and aestheticians to all work together, so if the patient needs referring to a different specialist, they have access to that.” This clinic is among Mr Mayou’s biggest achievements, he says, “Winning The Dermalux Award for Best Clinic London was thrilling. Just having happy patients is a huge achievement for me. When people say thank you and write letters, that’s just the greatest pleasure.”

In her early days, Dr Susan Mayou, who grew up in Buckinghamshire, appeared to be headed towards a career in cardiology after completing her medical degree at the University of London. She explains, “I did my physician exams and worked at St Thomas’ Hospital specialising in cardiology when I met Bryan playing tennis. Bryan worked with an anaesthetist who was also my flatmate and I remember my flatmate and I actually had a list of the three most eligible men at St Thomas’, and Bryan was one of them! When we married, I decided to specialise in dermatology instead of cardiology as I thought that would work better with our lifestyle due to the hours.”

Dermatology had always been of interest to Dr Mayou. She explains, “I always liked the feeling of doing something good for somebody; skin disease causes such distress to patients both because of the effect on appearance as well as symptoms and people are very happy after you have treated their skin problem, which really appealed to me.”

Unlike many dermatologists in the UK at the time, Dr Susan Mayou developed a fascination for non-surgical aesthetic treatments, an area which was previously outside the remit of most dermatologists. She explains, “When the cosmetic industry started to develop, I believe it was viewed as rather down-market by the British Association of Dermatology (BAD), because dermatologists in the UK were few in numbers, therefore, it was felt that doing cosmetic work was a waste of a dermatologist’s training as there were many more serious conditions for us to focus on.” However, Dr Mayou believed that dermatologists were in a unique position to optimise their in-depth knowledge of skin for cosmetic purposes. “I started doing aesthetic work because I liked the fact that I could enhance someone’s appearance in a conservative way using botulinum toxin and fillers. It made patients feel better about themselves, which can lead to a better quality of life,” she explains.

Dr Mayou soon realised that there needed to be more support for dermatologists who were wanting to delve into this field. “Myself and many of my colleagues started getting aesthetic complication cases referred to us as we were the most knowledgeable and most equipped to deal with skin issues. However, most of us weren’t doing the procedures in the first place and needed more knowledge in this area. On the back of this, myself and one of my senior colleagues, Dr Andrew Griffiths, created the British Cosmetic Dermatology Group (BCDG), which was then accepted as a subsidiary group of the BAD,” she explains. The purpose of this group is to ensure that dermatologists have access to training in aesthetics, Dr Mayou says, explaining, “We created theoretical and practical training modules so that dermatologists can understand the treatments to a very high standard. Not all are wanting to do the treatments themselves, but it’s important for them to know about them.” Dr Mayou says her job has led her to unexpected opportunities, “Through the aesthetic and cosmetic line, I have become a dermatological advisor to Neutrogena and also Johnson & Johnson; through that I have had exposure to marketing, branding and advertising, which I find absolutely fascinating as they are important business development strategies to know about.”

When discussing her biggest achievements, Dr Mayou is proud of her involvement in the BCDG and the success of the Cadogan Clinic. At the clinic, she is proud that herself and Mr Mayou can pass on knowledge to their employees and their aesthetic ‘Fellows’, who are invited to join them to learn at the clinic, and create an environment to share information. “We have a multidisciplinary team and like to work together to determine how different individuals should be managed using different perspectives,” she explains, adding, “There is nothing like teaching other people to make sure you get the facts right yourself.”

What do you like the most about your jobs?

B: I think it is most fun when working with interesting patients.

S: I agree, I love learning about the patients you get in dermatology and aesthetics. I also love that you can have the same patients for 10-20 years.

How do you stay up to date?

B: We have always been keen on education and are regularly teaching. Our aesthetic Fellows are very useful as they are always teaching us about their interesting research.

S: I like to learn about new technologies and products by attending conferences, such as the American Academy of Dermatology and the Aesthetics Conference & Exhibition.

How did you feel to win your recent Aesthetics Award?

S: Winning The Dermalux Award for Best Clinic London was really exciting! We weren’t expecting it and it was so lovely to have our work recognised.

B: We were thrilled – it’s a really fantastic honour.

What do you think the future holds for our specialty?

B: At our clinic, we are trying to ensure everything is backed up with scientific evidence, and I think that’s going to be the future.

S: I agree, knowing whether products work is very important, so I think this will be a huge focus in the future.