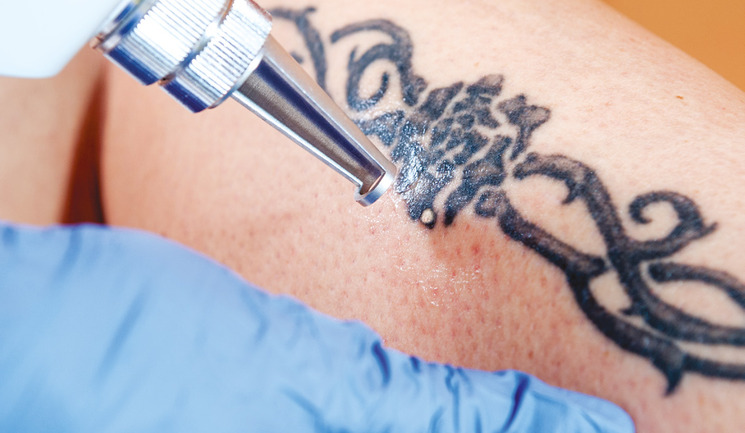 Advances in laser tattoo removal technology over the past 60 years have resulted in devices that provide more effective tattoo removal than were achievable in the past, while reducing complications. This article will discuss such developments with an emphasis on laser specifications and their importance with regards to patient safety and treatment efficacy. The content will be of interest to existing laser practitioners, and aim to serve as a useful guide for those new to laser tattoo removal who may be considering introducing such a treatment into their clinic.

Throughout the years, many methods for tattoo removal have been explored. These include dermabrasion, shaving, excision and direct suture, or excision with graft, salabrasion, cryosurgery and trichloroacetic acid.1,2 All of these methods can cause non-selective destruction of the tattoo and surrounding skin, often resulting in unwanted scarring.1,2

The advent of laser brought new options for tattoo removal. In the 1970s, laser tattoo removal was typically performed with either an argon or CO2 laser. During this time, laser tattoo removal worked via a non-selective heat and destruction process that also often resulted in prominent scarring.3 It wasn’t until Anderson et al. first reported their theory on selective photothermolysis in 1983 that lasers were able to be used more safely and effectively for the removal of tattoo pigmentation.4

With an understanding of this theory, practitioners were able to safely and effectively target and destroy their desired chromophore (ink pigmentation) in the skin as a function of its affinity to absorb a distinct wavelength of light. This theory also postulated that the chromophore will be selectively damaged or destroyed if the laser fluence, in terms of energy per area (J/cm2), is sufficiently high and the laser pulse duration sufficiently short. Consequently, the initial argon and CO2 lasers have been replaced with short pulsed Q-switched lasers for laser tattoo removal treatments. Q-switched lasers are now considered the gold standard for tattoo removal.5

Q-switching (QS) of a laser – sometimes known as giant pulse formation, or quality switching – is a technique by which a laser can be made to produce intense short pulsed durations on the order of nanosecond (ns) and picosecond (ps) with extremely high peak powers (MW – megawatt).5-9

The QS Nd:YAG wavelength can be changed by passing it through a potassium titanyl phosphate (KTP) crystal. Due to the optical properties of this crystal it is possible to halve the fundamental wavelength to yield 532 nm light (frequency is doubled) via a process known as second harmonic generation. A typical Nd:YAG laser with a KTP crystal can provide both 1064 nm and 532 nm light.10 The laser of choice often depends on the colour of the target pigment or tattoo ink. Table 1 depicts the relationship between pigment colour, corresponding treatment wavelength and the corresponding QS laser.5,7,8

In addition to selecting the appropriate laser wavelength, a laser must be able to deliver a laser pulse that is fast, whilst also having a large peak power output and a uniform beam profile for the safest and most effective treatment

In addition to selecting the appropriate laser wavelength, a laser must be able to deliver a laser pulse that is fast, whilst also having a large peak power output (maximum power during a pulse) and a uniform beam profile for the safest and most effective treatment.12 Numerous studies have demonstrated treatment efficacy using QS lasers for tattoo removal,6-10 although it should be noted that complications and side effects have also been reported. These include oedema, erythema, purpura, pinpoint bleeding, transient hyperpigmentation, persistent hypopigmentation, blister formation and scarring.5,7,9,13

When performing laser treatments, ideally the pulse duration of the laser should be faster than, or equal to, the target chromophore thermal relaxation time (TRT),6 as defined as the time that it takes for the central temperature in a structure to decrease by 50%.14 If this is achieved, and the pulse duration is less than the TRT of a particle, the heat will be confined within its structure and heat diffusion to the surrounding tissue avoided. Short pulse, high energy laser output is therefore effective for tattoo removal for it confines its energy to the target chromophore with little to no diffusion to surrounding tissue.9

Consequently, collateral damage and trauma to surrounding tissue is avoided. The estimated TRT of tattoo ink particles is 0.1-10ns,15 although some newer estimates are in the range of 10-100ps.6 Therefore, for effective tattoo removal it has been suggested that the laser pulse duration should be less than 10ns.5,7,15 The actual pulse duration of a laser will depend on the type of QS laser and the hardware and electronics used by the manufacturer.

The laser pulse duration is typically a set parameter as specified by the manufacturer. Traditionally, pulse durations for QS lasers were of the order of nanosecond pulse widths; however, more recently, picosecond lasers are becoming more readily available.7,9,16

Picosecond lasers are considerably faster than the TRT for an ink chromophore, and as a result are considered safer due to their reduced likelihood of skin trauma.7,9,13,16 They are also considered to be more efficient, for some ink colours,7,9,13,16 due to their enhanced ability to disrupt the tattoo ink granules relative to a nanosecond laser. Consequently, treatment with a picosecond laser may require fewer laser sessions overall for tattoo removal.7,9,13,16

Laser pulse duration has an inverse relationship with the laser pulse peak power and can be calculated according to this equation:22

This relationship can be illustrated by calculating the peak power for three typical laser pulses, each with a different pulse duration (viz. 10ns, 750ps and 450ps) but with the same pulse energy (350mJ). The resultant peak power calculated for each of the different laser pulse durations is presented in Table 2.

The calculated results depicted in Table 2 clearly illustrate the impact pulse duration has with regards to the laser peak power. In my example, reducing the laser pulse duration from 10ns to 450ps, while maintaining the same pulse energy, increased the laser peak power by more than 20 times. This relationship is something a practitioner must take into consideration in the event of changing from a nanosecond laser to a picosecond laser and transitioning treatment protocols to the new laser.

Laser fluence is a measure of the laser pulse energy per unit of area (joules/cm2) and is typically what most practitioners would adjust during a treatment plan. In practice, the typical laser fluence operating range will be somewhere between 2-9J/cm2 and will depend on many factors, including: the type of laser, pulse duration, selected wavelength, type of tattoo, and the patient’s response to the patch test (to name a few).9,17,18

As a laser beam propagates into the skin, light scattering occurs due to interactions with the skin. This scattering spreads the beam radially outward on each side, thereby reducing the beam’s effective fluence as it penetrates into the skin. As a result, energy is lost from the beam before it reaches the chromophore.8,19 Scattering losses are more significant for smaller beams where the spreading/scattering of the beam is relatively large compared to the original incoming beam spot size. Conversely, the impact of scattering from a large beam, compared to a smaller spot size of same initial laser fluence will have a lesser impact and thus have a greater effective fluence. A larger beam size will therefore propagate deeper into the skin and provide more energy to the site of the chromophore for more effective tattoo removal.8

Cencic et al. reported the impact of scattering as a measure of effective laser fluence for an Nd:YAG laser 1064 nm for two beams with the same initial fluence, but with different beam diameters.8 They found that an 8mm beam diameter will have approximately double the effective laser fluence compared to a beam of 2mm with the same initial fluence.

The extent of scattering is dependent on the laser wavelength and has been found to decrease with increasing wavelength.8,20 For example, an Nd:YAG (1064 nm) has a relatively small scattering co-efficient compared to alexandrite (755 nm), ruby (694 nm) or Nd:YAG (532 nm) laser wavelengths.

The use of skin optical clearing agents injected into the skin have been reported to improve laser tattoo removal by reducing the extent of scattering.19,21 The use of such agents reduce scattering by temporarily increasing the skin’s transparency via two main mechanisms – tissue dehydration and refractive index (RI) matching between tissue components.22

As depicted in Figure 1, a ‘top hat’ beam profile provides a homogenous peak power throughout the entire beam cross section. This is in contrast to a Gaussian beam profile, whereby the peak power smoothly decays from its maximum on the beam axis to zero.12 Homogeneity of the laser beam profile, such as with a ‘top hat’ profile, is of great importance with regards to treatment safety and efficacy.12

For effective laser tattoo removal, it is important for the practitioner to have a good understanding of the performance characteristics and specifications of their own laser. They should consider the pulse duration, laser fluence, beam diameter (spot size) and beam profile, and be aware of how such characteristics can have an impact on treatment efficacy and safety.