Lips Through the Decades 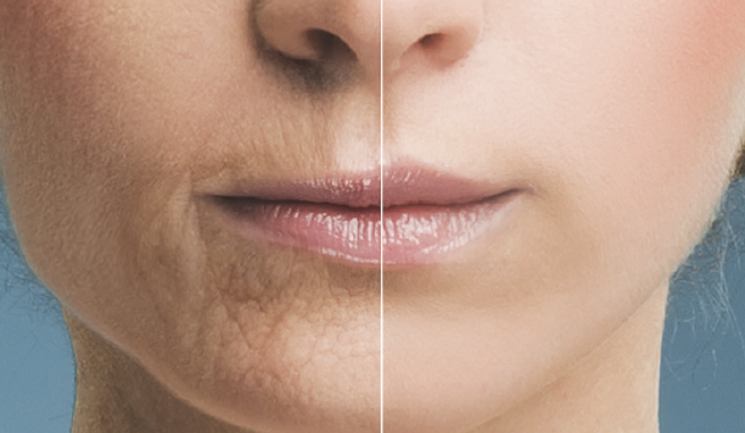 As many of us who work in the field of medical aesthetics are aware, we are often the go-to person for a patient who is unhappy with their general appearance. It is very common, in my opinion, that a patient might not be aware of exactly what it is about their appearance that is resulting in a less than favourable look, whereas some are only too aware of what their problem or area of concern is.

The ageing process will affect us all in time, and, in many ways it’s an unkind phenomenon. Anatomical changes, which affect the bone reabsorption in a structural way, set the parameters of how the soft tissues above are supported. The effects of dynamic muscle activity, as well as gravity, also play a part in our ever-changing appearance.1

It has been mentioned many times by aesthetic colleagues that facial anatomy in youth appears as a triangle or pyramid. The reason for this is that in youth the bony prominences and fat pads in the mid-face are well volumised, with good cheek projection. In the lower third of the face, the buccal fat pad is well supported by its retaining ligament and the chin projects well. This is the triangle or pyramid with a point at the base and a wider angle at the top. As the ageing process develops, the mid-face becomes flatter, the temples more concave and the jowls have been subjected to gravity, causing the lower face to become heavier than in youth, leading to the apparent inversion of the triangle caused by the anatomical changes of ageing.1,2

A recent 2017 study by Cotofana et al that looked at the anatomy of the perioral area might well change the way many injectors, including myself, treat the lip

What is happening within this triangle is of great interest to us as aesthetic practitioners, as it forms the canvas for our medical expertise, anatomy understanding and allows our creative abilities to thrive. One of the most aesthetically challenging parts of this triangle is the perioral region, which will be the focus of this article.

As we age, there are specific anatomical changes that happen to this area, and according to Gupta et al., these signs of ageing and the inability to conceal them can have an effect on a patient’s anxiety and depression levels.3

According to Sarver, the thickness of the female lip reaches its maximum at age 14, whereas boys lips do not maximise their thickness potential until the age of 16.4 Between the ages of 18 and 42, Sarver describes lip thicknesses to be similar for both sexes.4

Most patients in their twenties will present with good lip projection, sound levels of lip and perioral hydration and no evidence of rhytids in the upper or lower cutaneous white lip. The cupid’s bow will project, further exasperating the short appearance of the upper cutaneous white lip. It is expected for there to be evidence of some upper tooth show.5 The fashion for fuller lips is one that is being driven by the millennial market and social media.

Patients between the ages of 30 and 40 will have a degree of semblance in the appearance of the perioral and lip region and, in most cases, these changes would be due to environmental and lifestyle choices. According to Landau, smoking and UV damage are two of the most impactful and well appreciated environmental factors of ageing.5, 15

Research gathered between 1973-2003 indicates that tooth loss is more prevalent in older patients and is indicative of less structural support for the perioral region, resulting in the development of even more static rhytids.6 However, in the last 30 years, oral hygiene and periodontal health has improved significantly in the 20-80-year-old age groups. It is therefore expected that the evidence of perioral ageing will be less apparent than it has been previously.6

The menopause however, affects the skin in women greatly, with loss of sebum production and collagen density during the post-menopausal period, which drops by 2% annually on average.7 These changes will impact the integrity of the skin surrounding the mouth and therefore the aesthetic appearance. The average age of menopausal onset in Europe is 50.1-52.8 years,8 and there is literature that demonstrates the effects of this loss of collagen and the results that this has on the structural strength and quality of the skin.16

Of course, the menopause is not a factor in the male patient; however, men are not without ageing in this area. Montagna notes that follicular growth in the beard region slows down with the ageing process.9 Moretti discusses the increased vasculature in the male beard region, and this increased blood profusion will positively impact good skin quality.17 Likewise, as the beard density decreases, so will the blood supply and this would then explain the loss of tensile strength in this area, which could explain an increase in rhytid development in males of this age group.9,17

The signs of ageing in the 50 years plus individual are much more noticeable and include, but are not limited to, loss of lip projection, reduction in upper tooth show, increase in cutaneous rhytids, flattening of the philtral columns and elongation of the cutaneous upper white lip.10

Lip augmentation is the most frequently sought after procedure for the treatment of facial volumisation, according to The American Society of Plastic Surgeons.11 It is in my opinion that it is important that anyone offering lip augmentation to a patient should have sound knowledge of anatomy in order to limit the incidence of vascular or arterial occlusion.12 A recent 2017 study by Cotofana et al that looked at the anatomy of the perioral area might well change the way many injectors, including myself, treat the lip. This multi-centred anatomical study involved 193 anatomical head specimens, of which 56.5% were female cadavers.13 The study included the use of computed tomographic imaging, which showed the anatomical variances involving the anatomical location of the superior and inferior labial arteries in relation to the orbicularis oris muscle. The authors’ findings demonstrate that the superior labial artery runs at the level of the vermilion border, whereas the inferior labial artery is found inferior to the vermillion border. Both the superior and inferior arteries located in the midline were identified as submucosal.12,13 This would therefore indicate that the safest depth in which to inject dermal fillers into the lips in the medial aspect, would be deep, rather than superficial. However, there are anatomical variances from person to person, and this study demonstrated that across the 193 cadaver head specimens, the superior and inferior labial arteries were identified in three different locations.13 Augmentation of the lip with dermal fillers delivers a more youthful appearance and, according to a study undertaken by Bisson comparing lips of models and non-models, the models were more likely to have fuller lips and these were deemed more attractive.18 Awareness that the inferior and superior labial arteries could be more superficial than perhaps originally thought should impact how we, as practitioners, deliver our treatments in this region.

It is extremely important that you consult your patient carefully and advise appropriately, based on safe medical practice before performing any procedure. Our knowledge of harmony and proportion is critical when assessing and planning a lip augmentation and helps us to deliver what would be aesthetically pleasing for lips of patients within specific decades.14 However, it is always important to discuss with the patient how they would like their treated lips to look; after all, this is an individual matter. Practitioners should also be aware of the latest anatomical advice and studies to ensure they continue to treat safely and successfully. Less is more in my humble opinion!