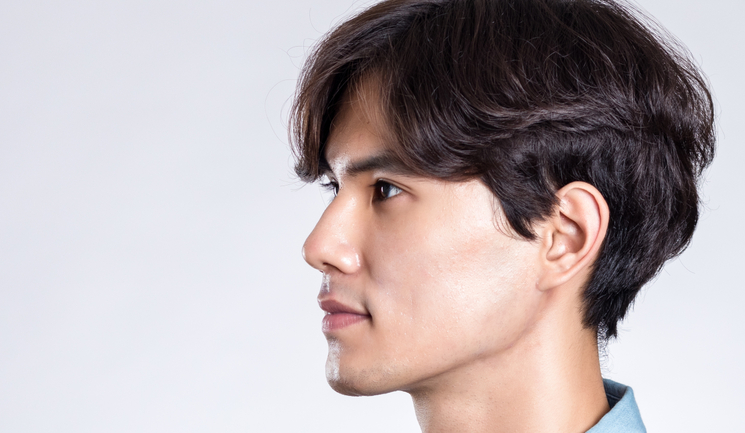 ]Sexual dimorphism – the phenotypic differences between the sexes of the same species – in some ways may be less obvious when it comes to facial structure. However, the approach to male aesthetics is different from that of a female. As more men come forward for non-surgical enhancements, it is important that we understand sexual dimorphism and have a profound appreciation of both male and female beauty. This would prevent unwanted feminisation of the male face, which, from our experience, remains one of the main concerns amongst male patients seeking aesthetic treatment.

In this article, we detail the step-by-step treatment of a 40-year-old male patient who presented to us with facial volume loss after losing weight. Due to his job as a personal trainer and fitness model, his body weight fluctuates frequently.

Upon presentation, he had lost 1.5 stone through intensive exercise and was worried about the ‘sunken appearance’ of his visage. The patient had never had any dermal filler procedures before the treatment. At the first consultation, we had a long and thorough discussion with the patient to identify his concerns, needs, worries and expectations. Benefits, risks and side effects, were also discussed, and alternative treatments including surgery were explored. The upper, middle, and lower thirds of the patient’s face were analysed for volume loss and the estimated volume of dermal filler required was also discussed. The patient was given a cooling-off period of two weeks before the procedure and was advised to carefully consider all the options. Photographs were taken before and after treatment, and consent forms were signed.

Facial attractiveness is characterised by a combination of factors that involve symmetry and proportions that are deemed aesthetically pleasing, according to a number of sources listed in the table below. Before performing any facial enhancing procedures with dermal fillers, it is vital to analyse the patient’s face so that we:

Our experience in treating male patients has led to the development of the ‘23XY Lift’, which describes the injection techniques of dermal fillers into the seven zones of the male face, where volume deficiencies are commonly found. 23XY is the genetic makeup of a male human (X and Y chromosome on chromosome number 23). This technique comprises seven single techniques, one for each zone, which are:

When it comes to male facial aesthetics, the 23XY Lift can help enhance the masculinity of the visage, and in our experience of performing 25 treatments using this technique, it also minimises the risks of complications and feminisation of the face. Here, we discuss the seven regions of the male face that can be treated using a step-by-step approach. These techniques are used widely within the aesthetics specialty and are considered safe. However, it is important to bear in mind that this is purely a guide, and there are various other techniques available for the same regions. The patient was treated using the following guide:

The inferior half of the temporal fossa has a higher vascular density, hence a higher vascular risk, compared to the upper half. Practitioners must note that the superficial temporal artery runs in the lateral third of the temporal fossa in the subcutaneous/ superficial muscular aponeurotic system (SMAS) layer. They should also be aware, that the anterior and posterior deep temporal arteries lie in the periosteal and muscular layers respectively in the inferior medial quadrant.8

Whereas the female cheek has a thicker fat compartment in the medial cheek, the male cheek is flatter, with a uniform distribution of fat and hence conforming more to the underlying structures. Therefore, the subcutaneous should be filled uniformly in a male face, replacing lost volume and maintaining the flatter and more angular cheek contour at the same time. Filling of the cheek also provides structural support to the tear trough and palpebral malar groove.

The infraorbital foramen marks the location of the emergence of the infraorbital neurovascular bundle. Also, injections around the eye area have to be done supraperiosteally to prevent damage to the lymphatic drainage system.8

The piriform becomes wider as the nose ages and alar base treatment will help define and restore a youthful appearance. Note that the facial artery usually lies lateral to the buccal-maxillary ligament, and hence it is important to position the needle correctly, in the right depth and to aspirate before injection.8 Injections in the alar base come with a risk of vascular compression.8 Patients should be made aware of this and report any skin changes to the nose after the procedure. Also, filling of the nasolabial lines can be carried out in the same session if required.

Superficial injections in this region will help support the structure and skin texture of the corners of the mouth. This treatment can be supported with deeper injections inferiorly towards the chin if required; dermal fillers should be injected medial to the mandibular retaining ligament.

In a male, the lateral border of the chin should correlate with a vertical line dropped from the corner of the mouth.9 For men with a chin cleft requesting anterior projection/elongation, fillers should be injected lateral to the cleft in order to preserve it. Increasing the forward projection of the chin will also tighten the skin around the jawline area.

Treatment of the lateral borders of the chin alone will result in a squarer chin, as well as a sharper and well-defined jawline. A line connecting the most prominent portion of the upper and lower lip should touch the pogonion.9 The lower lip should be 2-3mm posterior to the upper lip and the pogonion should never project beyond this line; if this was disrupted, the overall facial harmony would be disrupted too. Treatment of the mental crease can also be carried out in the same session (superficial injections).

Most males are blunt at the angle of the jaw, partially due to thinning of the temporal-buccal fat pad, and this treatment will project the jaw laterally and strengthen the jawline, resulting in a square jaw, which is usually desirable in a man. Dermal fillers must be injected supraperiosteally to avoid damage to important structures (e.g. parotid gland and ducts).

The patient was seen three times in total – consultation, treatment, and review at three-weeks post treatment. He was quite swollen and bruised, but that resolved spontaneously without any interventions. As seen in Figure 2, the patient’s results were immediately visible. Significant improvements to his concerns were observed. He looked more youthful, energetic and well-rested after treatment. To further optimise his results, skin resurfacing treatments were recommended, for example skin peels and laser treatments.

The aesthetic approach to treating a male face differs significantly to that of a female face. As aesthetic medicine predominantly focuses on the female face, characteristics of the male face must be fully understood and appreciated before being applied in our practice. This case study demonstrated that the male face can be successfully rejuvenated without risk of feminisation.