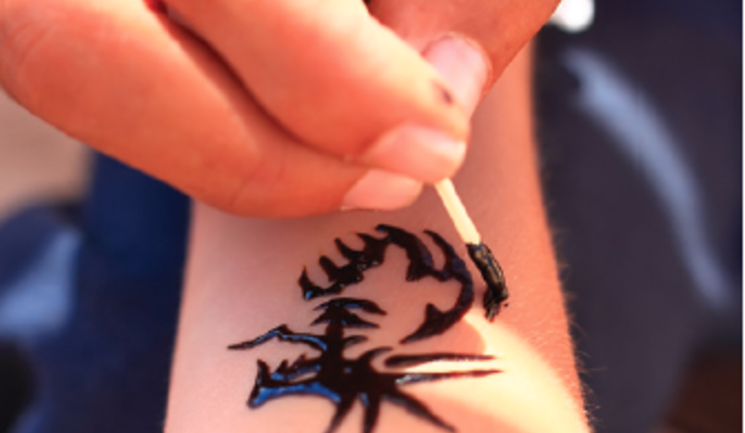 Recent years have seen a rise in the popularity of temporary tattoos, which is likely to have been driven by a change in societal views, with tattoos in general being more widely accepted. Daily bombardment with images of tattoo-laden celebrities has also helped elevate tattoo culture to the precipice of ‘modern cool’. It was reported in 2015 that almost 19% of the UK population has a tattoo.1 This increasing fascination with body art has translated to an increase in the consumption of temporary tattoos.

On the surface this seems a benign, inconsequential trend, providing consumers with coveted body art without any of the guilt or longevity associated with permanent tattoos. However, related with this trend has been a rise in adverse reactions to these products,2 particularly those purchased during holidays, funfairs or festivals abroad.2

These tattoos are often marketed as ‘black henna temporary tattoos’ and sold by artisans. This so-called ‘black henna’ may contain irritant dyes such as paraphenylenediamine (PPD), in concentrations which may lead to blistering, painful skin burns and scarring, putting the long-term integrity of the user’s skin at risk. A survey conducted by the British Skin Foundation in 2015 suggested that 40% of dermatologists (244 respondents) had seen skin reactions to temporary black henna tattoos.2

Although many patients with black henna temporary tattoo complications may be treated through the NHS, long-term complications do arise and it is important for aesthetic practitioners to be aware of the causes before determining the best treatment methods, and to ensure that they are equipped to educate their patients. This article therefore hopes to provide a comprehensive overview of black henna temporary tattoos, highlighting the possible adverse reactions and detailing management in both the acute setting and treatment of long-term sequelae.

Henna is a naturally-occurring pigment derived from the leaves of Lawsonia inermis, a small tree native to northern Africa, southern Asia and northern Australasia. The active ingredient lawsone is liberated from the leaves through a drying process, before further processing to produce henna paste. When applied, henna paste concentrates in the epidermis of the skin and stains orange when removed. After two to three days it darkens to a reddish brown colour, and it is in this form that henna has been used to create body art since antiquity.

Black henna, on the other hand, is a synthetic pigment derived by mixing chemicals and unlisted dyes with naturally-occurring henna. Its constituent chemicals are chosen to produce a dark, quick-drying ink that leaves a finish similar to that of a permanent tattoo. One agent that is often added to black henna to enhance the colour and expedite drying time is PPD.3

PPD is a diamine compound, an aromatic hydrocarbon with two amino groups attached. It is used in the textile industries for the production of synthetic polymers, latex chemicals, cosmetic dyes and pigments.2 Historically PPD was a key constituent of many cosmetic products. In the 1930s the practice of tinting eyebrows and eyelashes with PPD-infused dyes was commonplace. Following reports of blistering reactions and blindness associated with numerous tinting products, the US federal government created a legislative framework to govern the cosmetics industry; this was in the form of the Food, Drug and Cosmetics Act of 1938 (now known as the Food and Drug Administration).5

The first act was to remove ‘Lash Lure’ (eyelash and eyebrow dye) off the market.5,6 Through patch testing and product interrogation, a causal link between PPD and allergic contact dermatitis was established. It is now known that PPD is a potent stimulator of T-lymphocytes.3,7 Once activated by antigen, these cells release inflammatory cytokines and activate other lymphocyte subsets resulting in a delayed type IV hypersensitivity reaction. As a result, its use in the cosmetic industry has come under significant restriction.

The potency of PPD as an allergen is a function of its concentration and the duration of direct exposure. Previous allergen studies have indicated that patch testing 0.01% PPD for 15 minutes elicited no reaction. Increasing this to 1% for 15 minutes caused a reaction rate in 37.5% of subjects. Use of 1% for 120 minutes increased the reaction rate to 69% of subjects.3,10 Black henna tattoos have been found to have PPD concentrations as high as 15-30%; furthermore the ink is often left in contact with skin for several days.3,10

Cutaneous reactions to black henna are usually T-lymphocytes mediated type IV hypersensitivity reactions. These reactions are traditionally delayed, occurring up to 10 days after exposure.3 Previous sensitisation, however, may hasten the onset of symptoms.3 Initial manifestation of this reaction may be in the form of an intractable itch or burning associated with an erythematous eczematous rash in the pattern of the tattoo. This can progress to blistering, weeping and significant oedema with an attendant risk of supra-infection.3,11 In rare cases, anaphylaxis has been reported.3,12

Severe reactions can lead to significant scarring with keloid formation in at-risk skin types.11 In addition, many patients develop post-inflammatory hypopigmentation after resolution of the reaction. Long-term immune sequelae are particularly problematic.3,11 Once patients have been sensitised, they are at risk of developing more extensive allergic reactions, including anaphylaxis, if subsequently exposed to PPD. The widespread use of PPD in hair and textile dyes means that sensitised patients may develop allergic contact dermatitis to natural rubber latex, azo dyes, thiurams, para-aminosalicylic acid and benzocaine.3,13,14,15 Patient education and patch testing are therefore an integral part of long-term management.

In the acute phase, treatment is focused on switching off the inflammatory process and symptom control. Topical corticosteroids are the mainstay, with potency chosen according to the site of the lesion. For widespread reactions systemic (oral and intravenous) steroids may be considered. Antihistamines and simple analgesia may help the itch and burning. Any weeping lesions should be swabbed and sent for microscopy, culture and sensitivity testing. Acutely, treatment is similar to that for other cases of allergic contact dermatitis. In the event of anaphylaxis, intramuscular adrenaline must be given in addition to the above, with mandatory hospitalisation for observation (in case of biphasic disease).

Once the acute phase has settled, scarring can complicate the recovery phase. Scarring tends to be hypertrophic in nature with excess collagen deposition leaving a raised unsightly mark at the site of the temporary tattoo. Darker skin types (Fitzpatrick type V and VI) are at risk of keloid scar formation.11 Treatment of post-inflammatory scars poses a significant challenge. There are numerous approaches, which may be taken with varying degrees of success.

Conservative treatments include the use of occlusive dressings (silicone gel sheets, non-silicone occlusive sheets and cordran tape) and compression. The anti-keloid effects of occlusion are thought to derive from a combination of occlusion and hydration. Previous studies have indicated moderate improvement in 37.5% of patients treated with silicone occlusive sheeting worn with pressure 24 hours a day for 12 months.16 Another study of patients treated with semi-permeable, semi-occlusive, non-silicone based dressings for eight weeks reported flattening of scars in 60% of the cohort with a 90% satisfaction rate in the treatment group.16,17 Compression therapy involves the use of pressure to flatten scars. It is thought that engaged mechanoreceptors activate cellular apoptosis and also inhibit proliferation of fibroblasts.16

Intralesional corticosteroid injections are the mainstay of treatment and reduce scar formation by down-regulating the synthesis of collagen, glycosaminoglycan, inflammatory mediators and fibroblast proliferation.16 The most commonly used agent is the medium strength steroid, triamcinolone acetonide. Patients must be warned of the complications of repeated intralesional corticosteroid injections including atrophy, telangiectasia and local changes in pigmentation.16

More invasive treatments include cryotherapy and surgical excision. Cryotherapy affects the microvasculature, inducing apoptosis through intracellular crystal formation and anoxia. One to three freeze-thaw cycles lasting 10-30 seconds each are recommended for the desired effect.16,18 Treatment can be painful which may be a limiting factor with large treatment areas. As with intralesional corticosteroids, cryotherapy can also cause changes to local pigmentation.16 In addition to the aforementioned techniques, scar tissue may also be surgically excised with wounds carefully closed under minimal tension.16 This may produce a more cosmetically-appealing scar, however the outcome is operator dependent and there is a risk of new keloid formation in the revised scar in those with darker skin types.16

Finally, non-ablative and ablative laser techniques have also been used to treat hypertrophic and keloid scars with varying degrees of success. In a study treating 21 keloid scars with the Erbium: Yttrium aluminium garnet laser (Er:YAG), there was a 51% reduction in elevation.16,19 Similarly, a case series of 22 hypertrophic and keloid scars treated with the Neodymium: Yttrium, aluminium, garnet laser (Nd:YAG) indicated a persistent flattening of scars in 22.7% of cases, 12 months after treatment.16,20 The above techniques may be implemented with varying degrees of success depending on the nature of the scars.

For the best cosmetic outcome a combination of the above treatments is likely to be required. Each case must be assessed on an individual basis with consideration of Fitzpatrick skin type, scar location, scar size and local expertise taken into account. Surgical excision and scar revision for instance may be favoured in Fitzpatrick I-III while intralesional steroid injection may be first-line for darker pigmented skin (IV-V) due to attendant risk of keloid scar formation.

Post-inflammatory hypopigmentation is both a complication of black henna temporary tattoos and the treatment of scar sequelae. There are few effective treatments and in many cases pigmentation may improve with time. Camouflage makeup may be used as an interim measure.

term sequelae. Acute reactions are characterised by painful/itchy erythema, blistering and weeping with the added risk of supra-infection.3,11 This can lead to scarring and pigmentation changes, which may be difficult to treat. As practitioners, it is important that we are aware of the causes of such reactions and scars, and how to best manage the complications. More worryingly patients may become sensitised to PPD and other constituents with the risk of developing more severe reactions (including anaphylaxis) when challenged with these allergens in the future (e.g. hair dye).3,2,13,14

Prevention is always better than cure and as healthcare professionals it is our duty to ensure that our patients are adequately informed and educated about the risks associated with black henna tattoos. This is particularly pertinent as the source of this danger may be friendly, unassuming, itinerant artisans who are themselves unaware of the hazardous nature of their products.