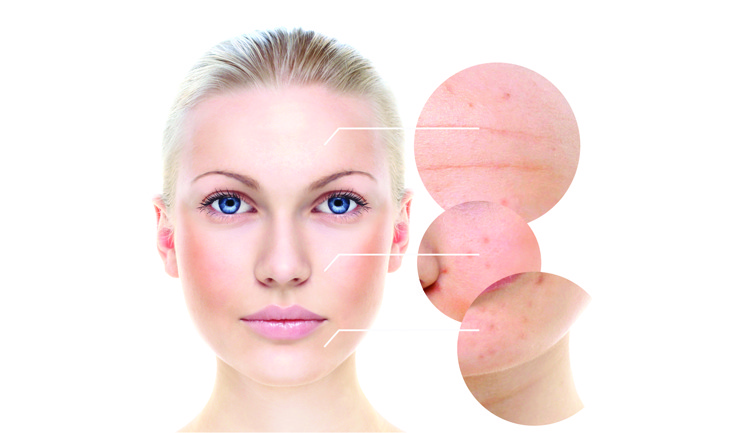 An increasingly important aspect of skincare regimes, designed to prevent and re- verse the visible signs of skin ageing, is the use of products with active ingredients focused on reducing unwanted chronic inflammation. The driving force behind this pivotal shift is that inflammation has now been implicated as a cause of many diseases, including cancer and visible skin ageing. The two significant triggers for inflammation are disruption of the external skin barrier and UV light exposure. It is now apparent that optimising the health of the external skin barrier structure and function to a high as possible level minimises the penetration of ultraviolet radiation and other damaging molecules. These are absolute requirements for the treatment and prevention of skin ageing and other skin conditions.

Denham Harmon has been credited as the first person to postulate the theory of free radical theory of ageing with his documentation of cellular destruction by reactive species over fifty years ago. Kligman and Laker described microscopic evidence that inflammation played a role in visible skin ageing two decades ago2. Andrew Weil, a prominent proponent of the anti-inflammatory diet has published his own recommendations for a healthy diet and supplementation. He believes that “without question, diet influences inflammation.” Weil and others point to the surprising link between inflammation and serious disease including heart attacks, Alzheimer’s disease, stroke, multiple sclerosis, rheumatic fever, rheumatoid arthritis, type 1 diabetes mellitus, systemic lupus erythematosus and scleroderma, colon, prostate and skin cancer. They propose that a single inflammation reducing remedy would effectively treat and prevent these conditions. Similar strategies are now proposed for treatment of ageing cells in the skin.

In the last decade the scientific community has started to recognise the link between inflammation and malignancy. The western world is facing an epidemic of skin cancers. 50% of people over sixty- ve years old are suffering from a solar keratosis. Since the mid-1970s in the UK, malignant melanoma incidence rates have increased more rapidly than any of the current ten most common cancers. The incidence of Non-melanoma skin cancers NMSC is also increasing inexorably. In 2010, there were 99,549 cases of NMSC registered in the UK although due to recording practices this is likely to be a substantial underestimate. 7 This is despite public education and the introduction in the 1980’s of sunscreens with a sun protection factor of fifteen or higher and the use of agents broaden- ing the protection to UVA exposure.

During this time however there has been a dramatic rise in the use of exfoliating agents using alpha hydroxyl acids (AHAs), retinoids and microdermabrasion. It has been shown that even mild barrier disruption and sub erythematous doses of ultraviolet light each induce microscopic inflammation and tissue destruction. Chronic, repeated disruption of the external skin barrier due to any cause has been shown to activate chronic inflammation. 8,9 On the other hand acute inflammation created by procedures such as microdermabrasion and certain peels does not appear to induce skin damage resulting in worsening of visible skin ageing.
Chronic inflammation produced by AHAs and retinoids would appear to be produced by barrier disruption. In 2002 the Food and Drugs Administration (FDA) due to concerns over increased photosensitivity and pre-malignant change in cells developed a warning for AHAs with a concentration over ten percent and pH less than three. Since the AHAs are not photosensitisers unlike retinoids the photore-activity must be due to barrier destruction.8,10 While short term use of retinoids in animal studies suggests a reduction of visible premalignant and cancerous growths Halliday reported increased skin cancers with prolonged use. 11

Potent anti-inflammatory products such as steroids and methotrexate have been very important tools in the physicians fight against conditions such as psoriasis, dermatitis, some skin cancers and a range of internal inflammatory diseases and cancers. Topical application of Diclofenac, a non-steroidal anti-inflammatory drug, received FDA approval to treat premalignant solar keratosis. Similarly Indomethacin, applied topically appears to improve visible skin ageing in animal models. 12 This successful use of medicine for treating a wide range of conditions supports the observations linking inflammation to diseases and cancer. Systemic lupus erythematosus, dermatomyositis and scleroderma are systemic diseases with characteristic skin damage. Characteristic epidermal changes and irregular pigmentation of the skin is present in these diseases and also visible skin ageing.

The last two decades has seen the public’s use of alternative and complementary medicine rapidly increase. Of the top ten selling herbs, half of them have documented anti-inflammatory and/or antioxidant mechanisms of action in humans or animal studies. More than one hundred herbs are being marketed in topical non-prescription skin care products. Many of these have proven anti-inflammatory and/or antioxidant activity suggesting they may be beneficial in treating and preventing inflammatory diseases and skin ageing. Care should be taken to not simply assume that all have proven benefit in humans. Of eight thousand documented antioxidant ingredients, only fourteen have been incorporated into topical formulations that were documented in human clinical trials to improve parameters of visible skin ageing. 13,14,15

Botanical extracts rich in alpha hydroxy acids (AHAs) such as apple, retinoids including retinol (vitamin A) as in carrot, certain ascorbic acids (vitamin C) such as citrus, soy milk and total soy, arbutin 16, date palm fruit as a solitary agent 17, green tea when applied topically
plus taken orally 18, colloidal oatmeal 19 and oat 20, and proprietary formulations of date kernel, meadowfoam and flax 15; pycnogenol 3 and parthenolide free extract (PFE) of feverfew 21 all have evidence in clinical trials to support their use in the treatment of ageing skin. The use of herbs as oral supplements is ever increasing in popularity with many containing multiple antioxidant and or anti-inflammatory ingredients. Three of these are supported by clinical studies suggesting efficacy in improving skin ageing. 15

The skin is our first line of defence against a range of potential external irritants. These environmental insults trigger the formation of destructive reactive oxygen species otherwise known as free radicals. Smoking, pollution, a huge range of chemicals contained in both prescription and over the counter cosmetic products, preservatives, allergens, medical and cosmetic procedures including excessive exfoliation, UV and X radiation. 8,10 As soon as the skin senses disruption of the external skin barrier, the transmitter Tumour Necrosis Factor Alpha (TNF?) is released along with Interleukins 1 (IL-1) and 8 (IL-8) and other markers that ramp up inflammation as part of the acute repair cascade to respond to a damaged skin barrier. 22,23 Metalloproteinase enzymes (MMPs) are enzymes that are part of the skin’s response to inflammation and function to remodel much in the same way as osteoblasts reabsorb unwanted bone matrix. They are synthesised rapidly in several skin cells including fibroblasts, keratinocytes and masts cells. MMPs degrade damaged extra cellular matrix, collagen and elastin to allow the skin to respond to injury. Whilst this activity is beneficial in some repair situations, chronic elevation of MMP levels leads ultimately to collagen reduction and loss of skin thickness and elasticity. Collagenase (MMP-1), stromelysin (MMP-3) and gelatinase (MMP-9) are the most important. These enzymes also play important roles in premalignant and malignant deterioration of skin cells. 24

THE IDEAL APPROACH TO SKIN HEALTH

The evidence to hand suggests that reversing and preventing chronic inflammation is the ideal approach to treating skin ageing, skin diseases and skin cancers. Ideally a skincare regime should contain topical products that optimise the health of the external skin barrier and dampen chronic inflammation. A diet rich in anti-inflammatory and antioxidant foods combined with oral supplementation may also improve outcomes. Allowing the skin to return to its normal function and structure will help reverse some of the existing signs of visible skin ageing and minimise future deterioration. Skincare professionals treating the skin should consider the impact of their interventions in terms of how much barrier disruption and chronic inflammation will be produced. To reduce side effects, hasten recovery and maximise out- comes from a procedure it is ideal to prepare the skin with skincare products that optimise the external barrier and reduce chronic inflammation. Maintenance skin care regimes to treat and prevent skin ageing should improve the quality of the skin by repairing the barrier and controlling chronic inflammation.

Alpha hydroxy acids and retinols in high concentrations can have a negative effect on skin barrier function. Care should be taken with skincare ingredients that induce significant persistent redness or peeling and increased sun sensitivity. Clinicians need to be mindful that ingredients in skincare can have negative and positive effects on skin health.