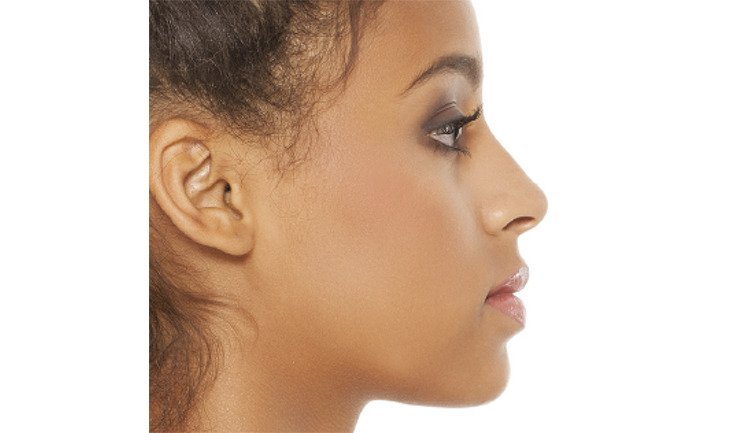 A non-surgical ‘profiloplasty’ refers to any treatment performed to enhance the profile of a patient, making them appear more harmonious and balanced. The procedure typically involves a non-surgical rhinoplasty (NSR), chin augmentation, and sometimes lip enhancement using a suitable dermal filler to create better overall balance and proportion to the face. The purpose of this article is to demonstrate various profiloplasty treatments and present case studies to showcase how it can be used in clinical practice. In an aesthetic clinic, patients rarely come in asking for a profiloplasty and typically will come in for a non-surgical rhinoplasty (NSR) without realising the impact their other facial features have on the appearance of their nose and face in general. I find that patients often fail to recognise a small or retrusive facial feature, as their focus is often on the dominant aesthetic feature such as a dorsal hump on their nose. Failure to address the relationship between the nose and the chin is a common error in the pre-treatment evaluation of a NSR. It is the responsibility of the astute clinician to assess, recognise and educate their patient about the aesthetic proportions of their features and how to safely and optimally create a pleasing aesthetic outcome. Consequently, an incorrect analysis leads to inappropriate conclusions.1,2

The ideal chin-nose relationship has been researched and theorised over. One of the most popular standards is that described by plastic surgeon Mr Mario Gonzalez-Ulloa in 2014 (Figure 1).3 He traced a line perpendicular to the horizontal line shown on the Frankfort horizontal plane (a plane passing through the inferior margin of the orbit and the upper margin of the external auditory meatus) and tangential to the nasion, which is in the midline and the point of the deepest nasal root, called the zero meridian. He proposed that, in a face with ideal proportions, the pogonion (the most projecting point of the chin) should be on that line or immediately posterior to it.

Profiloplasty can enhance the profile whilst avoiding the trauma, potential scarring and costs associated with surgery

In a patient presenting with a skeletal discrepancy such as a retrognathic mandible, often referred to as a class II skeletal base (where the lower jaw is set further back than the upper jaw), a low gonial angle, creating shorter lower third face height, or a small chin relative to the rest of the face, it is possible for a chin augmentation to create protrusion anteriorly and elongation of the chin.

As with all procedures, it is imperative that a full-face assessment of the patient is undertaken. A NSR involves injections of dermal filler into strategic points in the nose and is often, but not always, to mask a dorsal hump; thus straightening the bridge of the nose, and elevating the tip, creating a lifted and shortened appearance. In respect to a NSR, particular assessment of the relationship of the nose to the chin must be undertaken. Patients who have had previous surgical rhinoplasty pose greater risk of arterial complications due to the altered anatomy and these cases must be approached with care and only performed by experienced advanced injectors.4

Correct chin size and posture, including anterior projection, length and symmetry, is essential to achieving an aesthetically pleasing result after a NSR procedure. In particular, a reduced chin projection can make the nose appear abnormally large.2 Achieving a balanced proportion between the chin and nose is therefore fundamental to facial harmony.1,5 As mentioned, profiloplasty involves changing the static and dynamic appearance of the face, often to mimic skeletal structures. As such, I opt for a dermal filler that has volumising capacity with a high G prime and cross-linked to provide longevity. The dermal filler of choice should have a high safety profile and a low risk profile. In my experience, a product that contains local anaesthetic makes treatment more tolerable in these otherwise sensitive areas.

Side effects and complications

Contraindications for profiloplasty are the same as any other dermal filler treatment, and include pregnancy, breastfeeding, immune suppression and keloid scarring.6 Patients’ expectations must be managed and those that have particularly large noses, very deep dorsal humps or severe class II skeletal bases,10 maybe best treated surgically and should be counselled accordingly.

Side effects of dermal fillers in these areas include swelling and bruising, which generally take between one to four weeks to fully settle. Chin augmentation can be particularly tender after treatment, with swelling impacting the surrounding muscles and creating a feeling of stiffness. The patient should be counselled that this is normal and will subside; meanwhile normal analgesics can be used for pain management.

Complications of dermal fillers can include infection and necrosis.7 An aseptic technique must be employed to reduce the risk of infection and patients should be advised not to touch the area or apply makeup for at least 12 hours. Necrosis further to a vascular occlusion, although rare, is a serious complication and the risk will be reduced by a thorough understanding of the local anatomy and employing safe injecting techniques.

I believe practitioners should always aspirate to check if the needle is in a blood vessel prior to injecting as a safety measure and ensure that injections are deep to the bone or supraperichondrium (cartilage). I also advise injecting slowly and in small increments, always keeping an eye on the skin to check for any blanching which would indicate a vascular occlusion. Any signs of an occlusion must be treated promptly by dissolving the filler with hyaluronidase. It is important that patients are advised that if they experience any changes in skin colour, note ulceration or blistering of the skin, or experience white spots, which could indicate an impending necrosis, they must return for urgent treatment.

The risk of blindness following dermal filler treatment should also be discussed. Although this is rare, there have now been more than 150 reported cases worldwide, with the nose been one of the highest risk areas, and thus this should always be included in the consent process.7

This 22-year-old female patient attended my clinic complaining of a ‘big’ nose which she felt self-conscious of and had considered surgical rhinoplasty. On the profile assessment, I noticed that the patient had a dorsal hump on the nose, but the nose itself was not ‘big’. Her chin appeared flat in profile and the pogonion of the chin sat further back than the ideal chin-nose relationship as described by Gonzallez-Ulloa. She could also be described as having a moderately weak chin or a skeletal class II base. In this case, the smaller chin in proportion to the nose created the appearance of an oversized or prominent nose and compromised the facial balance.

Following assessment, discussion and planning, I felt this patient would benefit from non-surgical profiloplasty including a NSR and chin augmentation to correct and enhance the facial proportions. Following appropriate cleaning and disinfection, the NSR was performed using hyaluronic acid (HA) dermal filler injections at the radix, directly above and below the dorsal hump, and at the tip using a fine needle to these specific points to reduce trauma. Every injection of dermal filler was delivered slowly, at the supraperiosteal plane or supraperichondrial plane and after aspirating in small 0.1ml boluses. The total volume of HA injected into the nose was 0.6ml. The chin was then augmented with the same volumising HA. Dermal filler was injected supraperiosteally in boluses of 0.2ml per injection after careful aspiration. Filler was placed to enhance the anterior projection of the pogonion, and to increase the chin height at the menton (the most inferior point on the chin). A total of 2ml was placed in the chin underneath the mentalis muscle.

The whole procedure took 15 minutes of injecting time. The result shows an improved nose to chin relationship and a more feminine, aesthetically-pleasing profile.

This 25-year-old patient presented to clinic complaining that her nose was large, her lips were small and her face was disproportionate. On assessment, I noted a small dorsal hump on the bridge of the nose, a shortened lower third face height, a class II skeletal base with deep labiomental crease and an upwards rotating chin.

Treatment in this case was aimed at reducing the deep labiomental angle and improving the balance of the facial profile through primarily softening the deep crease, reducing the upwards rotation of the chin and lengthening the chin. I firstly elevated the radix of the nose using 0.2ml of a high G prime dermal filler injected supraperiosteally after aspirating, followed by an injection into the tip of the nose, again injecting deep and on the supraperichondrial plane after aspirating, delivering a bolus of 0.05ml to elevate the tip. The upper and lower lips were then augmented to enhance projection using a total of 1ml of a softer dermal filler suitable for lip augmentation. In this case I used a 27 gauge needle to deliver the product at the supra muscular plane in thin linear threads of 0.05ml per aliquot to enhance the projection and volume of the lips, keeping in mind the recommended PHI proportion of upper lip to lower lip width of 1:1.6.10 Lastly, I injected the labiomental crease with the same type of dermal filler that was used in the lips to reduce the deep indentation here using a 25 gauge cannula, augmenting the area with a total of 1ml (0.5ml per side) to reduce the upwards rotation of the mentalis. I then used 0.6ml of the same product used in the nose to augment the chin using three injection points, one at the menton and two either side of the menton, depositing a bolus of 0.2ml after aspirating using a 27 gauge needle. The photos shown were taken before and immediately after treatment.

This 26-year-old female patient attended my clinic complaining that she felt her nose was drooping and long, her lips were small and that she felt she looked ‘goofy’. On assessment, I noted a class II division dental occlusion, resulting in a marked dental overjet (the distance between the upper and lower teeth) creating this appearance. She had a class II skeletal base. The treatment plan in this case included a NSR, lip and chin augmentation. The nose was treated at four points: the radix using 0.2ml of product after aspirating onto periosteum to elevate the depression, then 0.1ml was injected immediately below the dorsal hump supraperichondrially, followed by 0.1ml injection into the tip of the nose on the supraperichondrium to create an upwards turning tip.

The last injected point was at the subnasale, depositing 0.1ml of product anterior to the nasal spine to extend the nasolabial angle. A dense dermal filler with lifting capacity and integrated local anaesthetic was used to perform the NSR and chin augmentation. I injected the chin using 1.5ml of product to enhance the projection of the chin, placed in small bolus points of 0.2ml per bolus and lateral to the pogonion.

The lips were enhanced with 1ml of dermal filler, with a focus on the lower lip fullness and downwards rotation, in order to mask and minimise the appearance of the class II dental occlusion. The photos shown were taken before and immediately after treatment.

Profiloplasty can enhance the profile whilst avoiding the trauma, potential scarring and costs associated with surgery. This is a suitable treatment particularly for class II skeletal patients who wish to enhance the appearance of their facial profile without undergoing surgery. Patients must be appropriately counselled about the risks, have their expectations managed to ensure they are realistic, and informed that the results are expected to last on average 12-18 months depending on filler used. The vasculature of the nose in particular deems it a high risk area to inject. The experienced injector must always remain conscious of this fact and employ safe injecting techniques to reduce the risk of an occlusion.