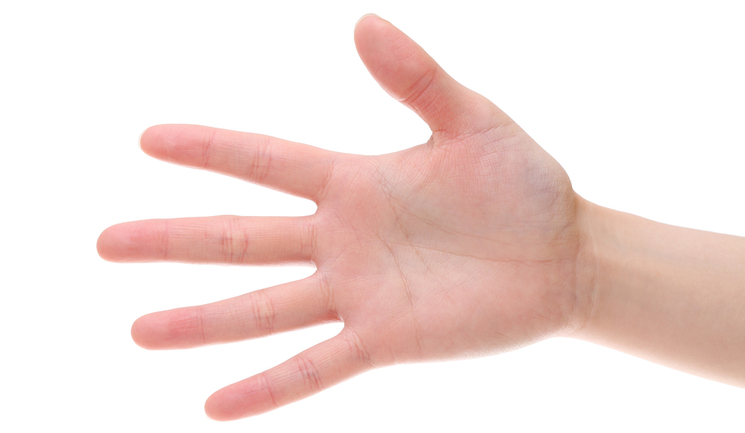 Primary hyperhidrosis is a fairly common and troublesome condition, affecting around 2.8% of the European population.1 Primary axillary hyperhidrosis is frequently seen and is treated effectively by many aesthetic practitioners using botulinum toxin, however, a less commonly treated, but equally as troublesome and common problem is hyperhidrosis of the palms of the hands and the soles of the feet, known as palmoplantar hyperhidrosis. In this article I will outline a number of common approaches to this condition in patients seeking treatment and the pitfalls associated with these.

Palmoplantar hyperhidrosis is estimated to affect around 0.6-1% of the European population,1 including both men and women equally, and adults and children.2 Most often idiopathic, this condition can be troublesome for a variety of reasons both socially and psychologically. Idiopathic or primary palmoplantar hyperhidrosis often begins in childhood or puberty and is commonly familial, being inherited in an autosomal dominant pattern.3,8

Excessive sweating from the eccrine glands, which are most densely distributed in the palms and soles, is the core feature of this condition. In primary hyperhidrosis, the glands themselves are essentially normal, but in response to emotions or stress, there is an overproduction of sweat in comparison to unaffected individuals. This in turn is believed to be due to hypothalamic over-responsiveness to cortical signalling, secondary to emotional stimuli. Primary hyperhidrosis is not believed to be related to normal thermoregulatory sweating, so does not occur in sleep or sedation, but there is an association of excessive sweat production at higher temperatures.4

More often than not, diagnosis is clinical, with a patient history and clinical examination forming the backbone of the diagnosis of this condition – further testing is rarely required. The Minor starch-iodine test may occasionally be used to confirm the diagnosis and location of hyperactive sweat glands. This involves use of a solution of 3.5% iodine in alcohol, applied to clean, dry skin and then lightly dusted with starch powder. Any areas of sweating cause this to turn dark blue, indicating the location of the hyperactive eccrine glands.3

The most effective topical therapy is believed to be 20% aluminium chloride in absolute anhydrous ethyl alcohol, which is thought to obstruct the eccrine glands and induce atrophy of the secretory cells, reducing sweat production.8 Compliance issues are fairly frequent with this treatment, as it requires nightly application for several nights for six to eight hours, until sweating reduces, then maintenance treatment once this reduction has been achieved every few days, although this varies from patient to patient. In addition to the cumbersome nature of this treatment, it can cause irritation and hypersensitivity so is not suitable for all patients.

In the past, systemic oral therapies have been used, such as anticholinergic drugs and benzodiazepines, to reduce stress responses, however, these are not popular with patients given their side effect profile (due to systemic anticholinergic effects) and dependency with the latter group of medications.3

Since the 1950s, iontophoresis has been used for the treatment of hyperhidrosis. This technique, which can be performed by patients at home, involves the passage of a low level electrical direct current across the skin, either slightly immersed in tap water or 0.05% glycopyrrolate solution (or on a gauze soaked with either liquid).5 Usually around a 30-minute treatment at 0.2mA current per cm2 on a palmar or plantar surface area, with daily treatments over ten consecutive days, then ‘top-up’ treatments once to twice per week thereafter.

Iontophoresis has been indicated to be effective in around 80% of cases5 but many people notice a worsening of symptoms initially before improvement. Results are temporary, lasting for only around 35 days in most cases, and further treatments are therefore required. The mechanism of action of this treatment is still unknown and side effects are rarely associated with this treatment. Combination treatments with topical aluminium chloride and iontophoresis are favoured by some patients but are fairly time consuming.3

Palmoplantar hyperhidrosis may be safely and effectively treated with botulinum toxin injections.8,10 The mechanism of action of botulinum toxin is via its inhibition of acetylcholinergic transmission at postganglionic sympathetic presynaptic nerve terminals supplying innervation to the eccrine sweat glands in the local area treated.8,10

Complications of botulinum toxin treatment for palmoplantar hyperhidrosis are rare, with minor post-procedural bruising being the most common

This use of botulinum toxin was approved by the Food and Drug Administration in 2004,8 and has been suggested to be effective for a mean duration of 6.7 months in patients treated,10 with some patients reporting symptom control for up to 12 months from a single treatment.6 In addition, quality of life as measured using the Dermatology Life Quality Index – a 10-question validated questionnaire – has indicated significant improvement in patients undergoing this treatment.12

Complications of botulinum toxin treatment for palmoplantar hyperhidrosis are rare, with minor post-procedural bruising being the most common. Grip weakness, as tested by the thumb-index finger pinch, has been reported in rare cases but this is transient, usually lasting only for a few weeks post treatment.12

Injection in the palms and soles is intradermal. In these particularly sensitive areas, analgesia is therefore an important consideration. Topical anaesthesia is often insufficient unless a high concentration local anaesthetic preparation is used for a prolonged time, therefore median and ulnar nerve blocks are often required. In a hospital setting, Bier blocks and sedation may also be options. Experience in performing local blocks is essential to avoid nerve injury as a result of direct injury or haematoma.8

In comparison to facial botulinum toxin treatments, a slightly lower volume, higher concentration of dilution can be used to reduce diffusion of botulinum toxin in the area, thereby reducing the risk of local muscle weakness. A suggested dose of 50 units per palm or sole is generally recommended.11 Spacing of injections is approximately 1cm apart, with a circumferential area of approximately 1.2cm being rendered anhidrotic around each injection site. The effect is apparent over a period of four to seven days post treatment and persisting from around four to 13 months.3,8

Several techniques have been described, with open sympathectomy rarely being used nowadays. Most often, surgical candidates will undergo either endoscopic T2/T3 sympathectomy or ganglionectomy involving either cauterisation or clamping, with clamping having the benefit of being theoretically reversible. Both treatments have high satisfaction rates and low risk of recurrence of symptoms.15 Dorsal percutaneous stereotactic thermocoagulation is a newer treatment with similar efficacy.9,14,15,17

Complications of such surgery are rare but include pneumothorax, haemothorax, injury to the stellate ganglion and resultant Horner’s syndrome, blunted bradycardia response to parasympathomimetic stimuli and compensatory sweating elsewhere in the body.14,16 The latter phenomenon may occur in up to 6-40% of cases and usually occurs in body segments just below the areas treated by sympathectomy.17 This may be treated with local botulinum toxin injections.3