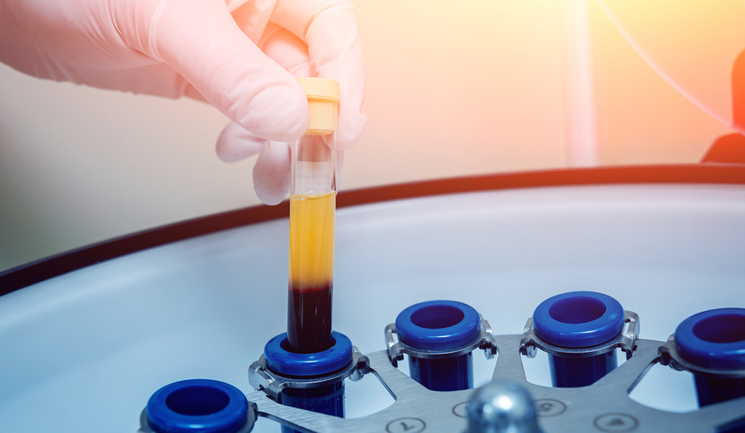 Platelet rich plasma (PRP) is used in many medical settings including orthopaedics, plastic surgery, dental practice and dermatological clinics; mainly advocated for its potential for wound healing and tissue regeneration.1-3

PRP is now finding a role in the treatment of alopecia,7 striae distensae8 and acne scar revision.9 However, despite recognition of the healing properties of PRP, and evidence of the role of platelet growth factors in tissue regeneration, there remains a lack of robust evidence for the efficacy of PRP for facial rejuvenation.

The objective of this paper is therefore to review the current evidence available for the effectiveness of PRP for facial rejuvenation to improve aesthetic practice.

A review of the literature regarding use of platelet rich plasma in aesthetic practice was carried out on May 7, 2017. Searches were performed using PubMed, Medline and Embase. Search terms are indicated in Figure 1.

Results of the search

There were 27,298 papers on PRP, most of which relate to non-aesthetic uses, such as for treatment of tendon injuries, delayed bone healing and experimental in vitro and in vivo studies. The search results indicated that there is limited literature on the use of PRP for facial aesthetic indications.

Non-facial applications, animal studies, non-aesthetic indications, non-clinical and in vitro articles were excluded, since this review is aimed at presenting evidence for the practical application of PRP in facial aesthetic practice.

Following these exclusions, only seven papers were considered relevant for review, investigating the role of PRP in facial skin rejuvenation. Three further papers reporting combination treatments of PRP with other treatment modalities were identified (Figure 3). Papers selected were reviewed with consideration of the level of evidence according to the American Society of Plastic Surgeons rating scale (Figure 2).10

The majority of these studies provided weak levels of evidence as per the American Society of Plastic Surgeons' Level of Evidence Rating Scale. Some were inconclusive case series, with no control or placebo groups, and were non-randomised with small numbers of subjects. Results were based on self-assessment rating scores, wrinkle severity rating scale,18,24 or specialist opinions, which may not always be sufficiently objective or validated (evidence level IV).12-15,17

Two studies provided stronger evidence of efficacy through use of split-face treatment protocols,11,16 although one was only a pilot study with small subject numbers.16

Gawdat11 used a randomised split-face method in 20 subjects to compare the effect of PRP on facial skin appearance. PRP was compared with ready-made growth factors applied using mesotherapy. Evaluation included physician assessment and patient satisfaction questionnaires. A validated global aesthetic improvement scale was used to assess the outcome of the appearance of facial skin after treatment in both groups.24 There was a statistically significant improvement in the appearance of facial skin in both groups after four months but the benefits of PRP-treated skin appeared to be more sustained with better results at six months (evidence level III).

Kang16 compared PRP with platelet poor plasma (PPP) supernatant, which was obtained following centrifugation of whole blood and removal of the PPP layer. In his preliminary pilot study of 20 patients, post-treatment assessment was made by subjective patient satisfaction questionnaires, and blinded review of clinical photographs by dermatologists. This is a well-structured, controlled, randomised, blinded prospective pilot study. A control group using saline was included and results showed a statistically significant improvement of wrinkles and skin tone in the PRP group (evidence level II).

Three papers were identified that looked at PRP in combination with other modality treatments.19-21

All 11 of the patients receiving combined laser and PRP treatment reported some degree of improvement in skin texture or fine wrinkles compared with 58% of the control group that received fractional laser treatment alone. Blinded dermatologist review of post treatment photographs reported five patients (45%), in the laser group, and eight (73%), in the combined PRP group, improved. There was histological evidence of increased skin elasticity and fibroblasts activity in the PRP group (evidence level III).19

In a blinded, split-face study of 13 patients by Hui et al,20 PRP was injected into one side of the face and 0.9% saline into the other side. The whole face of each patient was then treated with fractional CO2 laser. Patients were reviewed after three months of treatment. Subjective patient satisfaction scores were used to assess facial wrinkles in the laser/PRP group and the control laser/saline group, (76.92% and 69.23% respectively); skin texture satisfaction, (84.62% and 76.92%); and skin elasticity, (69.23% and 61.54%).

These results were statistically significant. Double-blind assessment by two dermatology specialists showed that in the laser/PRP and control groups, improvement in facial wrinkles was 76.92% and 61.54%, improvement in skin texture was 84.62% and 69.23%, and improvement in skin elasticity was 61.54% and 53.85%, respectively. Additionally, it was noted that there was overall significant improvement in facial wrinkles, and appearance in both treated areas, (laser with and without PRP), suggesting a benefit in laser treatment alone. The authors conclude a possible synergistic beneficial effect of PRP on facial rejuvenation when used with fractional CO2 laser treatment, (evidence level III).

Ulusal et al. looked at the effect of a combination of hyaluronic acid (HA) with PRP injections in 94 patients, on the appearance of skin texture, pigmentation and sagging by subjective patient satisfaction scores and dermatologist rating.21 There was a correlation with the number of treatment injections applied – one to eight injections over an ill-defined period, and patient reported improvement, up to 19 months post treatment. Using an overall aesthetic improvement score, there was a significant ‘moderate improvement’ in the general appearance, tone and texture of the skin compared to pre-treatment assessment. There was no comparative or control group using HA or PRP alone and so the benefit of PRP over dermal filler alone was not confirmed (evidence level IV).

There is much research on the effectiveness of PRP in multiple non-aesthetic indications. Many papers present in vitro properties of platelets, mechanism of action of various platelet growth factors, and the potential for healing and restoration of tissues from activated platelet-derived agents.

Apart from the limited evidence in facial aesthetics presented in this review, practitioners are now finding a role for PRP in treating skin conditions such as acne,9 striae distensae,8 and hair-thinning alopecia,7 where hair growth benefits have been reported.22,23

My personal, unpublished experience with PRP is highly encouraging, with good patient satisfaction and subjective improvement when used for facial rejuvenation. My own early results on the effect of PRP on appearance of striae distensae, when used in combination with microneedling and radiofrequency, are also very satisfactory and demands more robust investigation.

Most of the studies reviewed in this short article were of limited evidence strength – evidence level III or IV – and were based on small numbers of non-randomised design with subjective outcomes. All of the studies reported some degree of beneficial effect of PRP on facial rejuvenation. There is a possibility of reporting bias, although lack of reports of poor outcomes with PRP in aesthetics is encouraging.

This review has highlighted the paucity of high level evidence-based research papers in the field of PRP use in facial aesthetics. This probably reflects the many challenges and difficulties encountered in the design and execution of studies in this field. PRP preparation techniques vary and there remains a lack of an agreed definition of what constitutes PRP; for example, the optimal concentration of platelets, and whether to activate or not. T

he volume of PRP applied and the frequency and technique of injection and the duration of treatment, are also variable factors and no consensus exists as to an optimal treatment regime. Objective end point assessments of the effectiveness of PRP in improving facial skin appearance usually rely on subjective patient or clinician rating score questionnaires and photographic analysis. These issues present major challenges in this field of aesthetics, yet to be satisfactorily overcome.

Despite these limitations, I believe that current evidence provides optimism that PRP will have an increasingly beneficial role in aesthetic practice in the future and that public and professional interest will continue to grow.