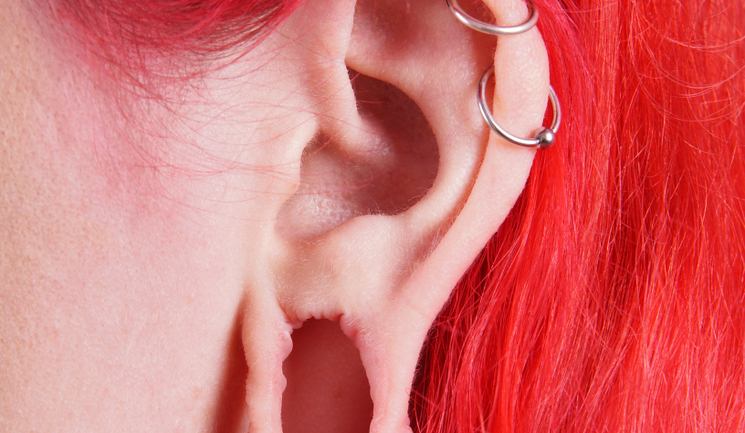 Earlobes form an integral part of facial aesthetics and are considered an important part of the facial appearance. They offer significant characteristic features that could cause concern if they are asymmetrical or too large. In this article, I will discuss the relevant anatomy that must be considered and will examine common conditions that can affect the earlobe.

Understanding external ear anatomy is vital in treating the earlobe (Figure 1).2 The external ear comprises the auricle, or pinna, and the ear canal. The auricle (visible part of ear) is composed mainly of cartilage covered by skin and consists of the helix, antihelix, lobule, tragus, and concha. The human earlobe (lobulus auriculae) is composed of tough areolar and adipose connective tissues, lacking the firmness and elasticity of the rest of the auricle.

There are mainly two types of earlobes; one where the lower lobe is connected to the side of cheek and another where the lower lobe is free from the side of cheek. The earlobe has a large blood supply to help with warming the ear and maintaining balance.2 The blood vessels and nervous systems must be considered while treating a patient and good anatomical knowledge of this area is critical.

Blood supply to the ear

The external carotid artery consists of three branches that supply blood to the ear. These are the occipital artery, posterior auricular artery and the anterior auricular branch of superficial temporal artery.2 The veins run together with each artery, as illustrated in Figure 2. Having knowledge of the blood supply helps the practitioner to ensure that the flap will continue to have blood supply when cutting the earlobe.

Sensory innervation of the external ear

Ear piercings and wearing earrings are known to cause trauma to the ear, some of which include split earlobe, an enlarged ear piercing hole and keloid scarring.

Split earlobe, commonly caused by wearing large and heavy earrings that are suspended from a fine ring, will gradually cut through the earlobe. Going to bed without removing heavy earrings can also cause split earlobe, as the earring puts weight on the earlobe through minor pulling on the earrings that occurs as the head rubs and moves on the pillow. Catching earrings whilst combing hair can also cause trauma. The traumatic split earlobe can be divided into two categories: complete and incomplete, where the hole from which the piercing has been made is either slightly torn or completely torn.

The number of young patients wearing enlarged plugs in their earlobes has been gradually increasing over the years. According to Victoria Pitts, assistant professor of sociology at Queen’s College, City University of New York, ear stretching was popularised in the 1980s with the rise of the body art movement.4 It has continued to be fashionable for teenagers to enlarge the ear piercing hole with a method called ‘gauging’. Gauging involves gradually placing gauge earrings that expand in size to enable the hole to continually stretch and enlarge. The gauge size could increase from 1mm up to more than 2cm by using a tapering tool. When one wants to reduce the hole, reversing the size of earrings gradually is recommended, however this does not completely reduce an overly stretched hole.9

When it comes to choosing the right technique, rather than taking a one-size-fits-all approach, each case should be evaluated on an individual basis to decide which technique is likely to offer the best result in a given case. The following are my preferred treatment techniques:

In general the technique of split earlobe repair falls into two categories, a straight line or a broken line of repair. The straight line repair is simple but, aesthetically, the final result might be unacceptable as the scar contracts and a notch at the free border will appear. The straight line can be avoided either by using a broken line of repair technique such as a Z-plasty7 (also known as the lab-joint technique6 or by L-plasty,8,9 which is my preferred technique). Z-plasty is a technique that leaves the wound in a Z-shape to prevent the risk of the scar shrinking and causing a notch effect on the free border of the treated earlobe.

For incomplete split earlobe repair, the L-plasty is recommended, rather than cutting skin around the edge of the split and stitching. Doing so may cause elongation of the earlobe, which is an unacceptable shape for some patients.

A earlobe repair procedure is carried out under local anaesthesia in an out-patient theatre. I have detailed the procedure approach below:

When choosing the right method for repair of the earlobe, assess the tissue available in each individual case and discuss options and the patient’s preference prior to choosing the treatment technique. Taking added precaution during the procedure will assist in avoiding further complications. Some of the measures to take include: