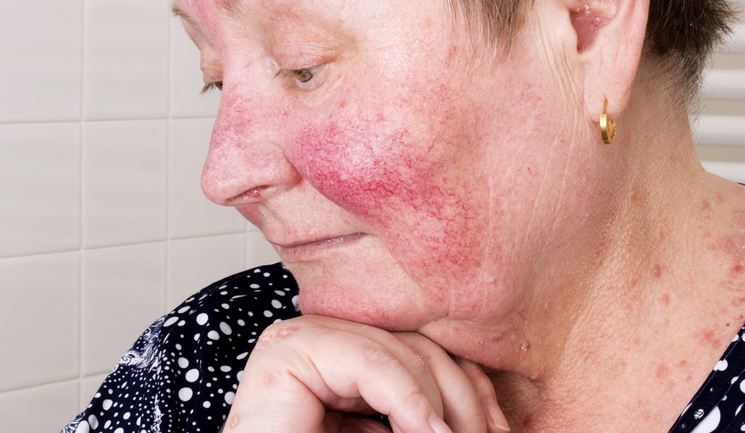 Rosacea is a condition often misdiagnosed and the causes are sometimes unclear. This is because neither the aetiology, genetics, pathophysiological basis of the vascular, inflammatory nor fibrotic changes are well understood.1 It manifests on the face, especially the cheeks, chin, nose and mid forehead, and although it is not a life threatening condition, it can cause enormous social and psychological problems.2,3

Patients with rosacea have reported a negative burden of their disease, such as low self-esteem, low self-confidence, and decreased social interactions. Improvement of the clinical symptoms of rosacea can improve the patient’s emotional wellbeing and quality of life.4,5 Rosacea is considered incurable due to its genetic connection,6 however, with the use of appropriate treatments, one can give a patient control over this common aesthetic concern.

Rosacea symptoms consist of telangiectasia, erythema papules and pustules, and in some situations it can involve the eyes (ocular rosacea).7 Rosacea develops gradually; in a survey of 1,391 rosacea patients conducted by the National Rosacea Society (NRS), 43% of patients said their rosacea first appeared between the ages of 30 and 50, while 39% reported that the disorder occurred after age 50 and 17% said they developed rosacea prior to age 30.8 Mild episodes of facial blushing or flushing can lead to a permanent red face. Individuals with fair skin; particularly those of Scottish, Irish or Celtic descent are more predisposed to rosacea. As such, the condition is commonly known as ‘the curse of the Celts’, although people with darker skin types can also suffer from it.9

Rosacea is more common in women than men and women often develop it earlier in life.10,11 However, the condition is generally more severe in men where changes to the texture of the skin, skin thickening and the nose appearing bulbous and enlarged may occur, also referred to as rhinophyma.12 It is possible that male hormones contribute to the development of rhinophyma,13 although there isn’t solid evidence to support this. To manage this condition, surgery is often necessary. The aims of surgical treatments are to remove the excess tissue and restore the natural shape of the nose. Additional treatments can reduce the redness of the nose; depending on the severity and extent of the rhinophyma a practitioner may offer dermabrasion or laser.

The causes of rosacea are not clearly understood. There are several possibilities but there isn’t enough evidence to support each theory as conclusive. There appears to be genetic and environmental factors involved in rosacea; frequently there is a history of family members having the condition. Some of the proposed possibilities are vascular irregularities, facial mites and bacteria, the use of steroids and other environmental factors.16,17

Hormonal imbalances in perimenopausal women may be a causative factor in vascular instability. According to Dr Wilma Bergfeld, head of the clinical research section of the dermatology department at Cleveland Clinic and former president of the American Academy of Dermatology, “it has been widely observed that rosacea is often aggravated at menopause and sometimes during mid-cycle.”18

The success of IPL is heavily dependent on the skill of the practitioner, their knowledge of the physiology of rosacea and their technical expertise in the delivery of IPL

Studies have suggested a link between Helicobacter pylori infection and rosacea.19,20 Another theory is the existence of demodex folliculorum (facial mites) as a possible cause; the mite colonises enlarged sebaceous follicles that are found in rosacea sufferers. Demodex mites are a natural part of the human microbiome but frequently occur in greater numbers in those with rosacea. There has been much debate as to whether their increased numbers are a cause or result of rosacea.21

Rosacea often flares-up when something causes the blood vessels in the face to expand, which causes redness. Common triggers are exercise, sun and wind exposure, hot weather, stress, spicy foods, alcohol, and hot baths. Swings in temperature from hot to cold or cold to hot can also cause a flare-up of rosacea.22

At the Pulse Light Clinic, our approach to the treatment of rosacea has evolved over the past ten years and includes state-of-the-art intense pulsed light (IPL) technology, and nutritional advice. A rosacea sufferer will often approach a consultation with great trepidation. They will most likely have already seen various doctors and have had numerous treatments recommended by their GP, all to no avail. IPL becomes the last resort for many patients, so by the time they approach us they have usually adopted a negative mind-set regarding rosacea treatments. Therefore, it is important to address the emotional distress that the person is feeling.

Our duty of care in the first instance is to reassure them that they can be helped. We do this by providing them with up-to-date information on all aspects of rosacea treatments. We then conduct a full assessment of their condition and needs, based on the knowledge and experience we have gained over the past decade. The patient is given detailed information on how IPL works in relation to rosacea. They are shown the different wavelengths used (the range is between 400 nm-1200 nm) and how many passes on the face will be done on each treatment. A package of normally six treatments is suggested, spaced three to four weeks apart.

The more severe the rosacea, the more treatments are generally needed for optimal results. In my experience, sometimes between six and eight treatments are required to achieve maximum clearance of blood vessels and redness. Then, an IPL patch test is conducted. An area of the face, normally the jaw line, is selected for the patch test and each wavelength (chosen by the practitioner based on their knowledge of the patient) is directed on that area for approximately five minutes. All safety precautions are observed prior to the patch test. The patient is made familiar with the entire IPL procedure, which lasts on average 40 minutes per treatment.

The success of IPL is heavily dependent on the skill of the practitioner, their knowledge of the physiology of rosacea and their technical expertise in the delivery of IPL. At our clinic we have evolved a successful IPL technique using different wavelengths of light to address various aspects of the condition, ranging from the vascular components to the facial mites. We customise the wavelength, number of pulses, duration of pulses, delay between pulses, and power delivered to best match the relative depth, size, and absorption characteristics of the targeted blood vessels. As each wavelength is used, the placement of the handpiece crystal on the face is varied throughout the treatment to ensure all vessels are reached. This flexibility and variability allows us to maximise results. Wavelengths are selected according to each individual patient, taking into consideration the subtype of rosacea, the colour of the skin, the calculated depth of the epidermis and location and direction of growth of vessels. These are just some of the factors involved in selecting parameters and wavelengths, which is done at the first consultation and throughout each subsequent treatment session.

We have seen dramatic results in as little as three treatments, where patients have reported the stinging and burning of the face has disappeared. Patients may come for top-up treatments as a preventive measure. We usually recommend once a year, but on occasion we have had patients return after five years with very few symptoms. This type of long-term result was a combination of IPL and nutritional therapy. We work closely with a nutritionist who specialises in rosacea. Each individual sufferer will usually have specific nutritional deficiencies and requirements and should always see a trained nutritionist. Certain minerals and vitamins recommended will include: hyaluronic acid, B vitamins, essential fatty acids, apple cider vinegar and avoiding certain foods.23

When we first began using IPL for rosacea treatment back in 2001, the patient would be advised to allow as much as four days of downtime due to swelling and redness of the face. Sometimes this was accompanied by slight bruising, which would take longer to disappear. However, as technology keeps improving, these after effects became less and less common; hence, today they have almost completely disappeared. Now, any redness will likely dissipate within 20 minutes following treatment. At the Pulse Light Clinic, we use IPL technology that is capable of producing excellent results without any downtime, after-effects or complications that were once associated with IPL.

The combination of intense pulsed light technology and nutritional therapy is a safe, highly versatile and effective method for the treatment of rosacea. The appropriate use of the wavelengths involved in this technology, coupled with the technical ability and experience of the practitioner, is vital to achieving optimum results. A mere cosmetic approach to this condition will not suffice, rather years of research, training, expertise and commitment to obtaining long-term results is required and is the benchmark standard for the successful treatment of rosacea.