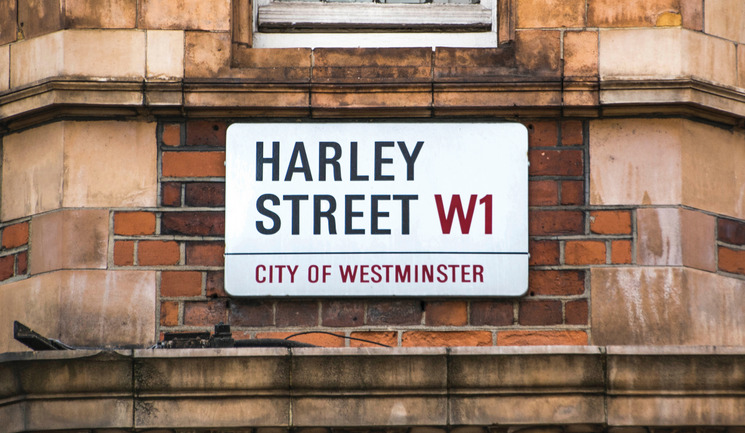 With many practitioners using the phrase ‘Harley Street trained’ as an indicator of their education standards, Dr Steven Land debates its use

Training is always a subject of debate in the unregulated aesthetics field. Something that has become apparent is the popular use of ‘Harley Street trained’ in practitioners’ marketing to indicate their level of competency for clinical practice.

However, what does this phrase actually tell patients about our level of training, and is it enough to say that you are ‘Harley Street trained’ or ‘qualified’ to assure your patients’ safe and successful results?

Why the cachet in a Harley Street qualification?

In order to fully understand why being ‘trained on Harley Street’ is a such an often-used claim of credibility, we need to look back a little at the history of Harley Street itself and why it became synonymous with the ‘expert practitioner’. Cavendish Square – from where Harley Street begins – was developed around 1717 and construction of Harley Street began in 1729, on land owned by Edward Harley, the Earl of Oxford and Mortimer.1 The street had matured and looked much as it does today by around 1770. The first doctor known to move into Harley Street was Dr Robert Perrean in 1775. He found the address so desirable that he was found guilty of forging documents to acquire his residence and publicly hanged for his troubles – an ominous start…2

Various well-to-do doctors continued to move to the area, beginning its reputation as the place to visit for expert medical opinion during the late 18th century. Following their prosperous patients into suburban areas, doctors continued to open their consulting clinics around lower Harley Street and Cavendish Square. By the mid-19th century, Queen’s College girl’s school opened its doors on Harley Street and renowned British nurse Florence Nightingale had taken up residence to open an institution for sick gentlewomen. With the arrival of the Royal Society of Medicine and Royal College of Physicians around the area, Harley Street’s role as a medical hub was solidified.

Around a century later, approximately 800 doctors were believed to consult from Harley Street, with 600 more in the surrounding streets and squares.2 The stampede to bask in the glamour of such an address had begun and to use Harley Street for your clinic was considered the sign of competence and quality, and still is to this day.

The prestige of ‘Harley Street trained’

Despite its strong reputation, the address is no guarantee of qualification or competence. As the prestige of the address grew, so did the price to purchase or rent premises, meaning it’s unfeasible for many practitioners to practice there. Second only to owning a clinic on Harley Street seems to have developed the qualification ‘Trained on Harley Street’ – if you can’t have the prestige of being based there, you can at least claim some kind of association.

Although it’s a fair enough claim to make provided you were trained there, when it comes to this unregulated field, in my opinion, this statement is not without problems. There are some fantastic training establishments on Harley Street, but this glamour attracts the wrong sort as well. Anyone can rent a training room and train on Harley Street and their candidates can then tell everyone they are ‘Harley Street trained’.

Whilst this term is essentially meaningless, the public still regard the street as the pinnacle of medical excellence and so it will continue to carry status. Many of us in the industry know, however, that ‘Harley Street trained’ is no guarantee of quality and the more it is bandied about, especially by poorly trained, non-medical injectors, the more danger there is that the general public will start to lose trust. Which begs the question, what do we do?

The easy thing would be to nothing – allow the name to become more and more tarnished and let it slowly lose its shine. This approach, I believe, risks patient safety and allows any medic or nonmedic to be ‘Trained on Harley Street’ and it becomes a pointless claim with no guarantee of the practitioner’s competence.

If we think it is worth protecting, then the good training facilities need to maintain their high standards and campaign for others on the street to aim for and meet those same standards. Practitioners using the ‘Harley Street trained’ claim need to make clear what this means to their patients – clarify who they trained with and in what – on their websites and in their marketing materials.

I, for one, think something like a good reputation is worth fighting for. The Harley Street residents and landlords need to band together to prevent poor practice and poor teaching and help maintain its ‘street credibility’.