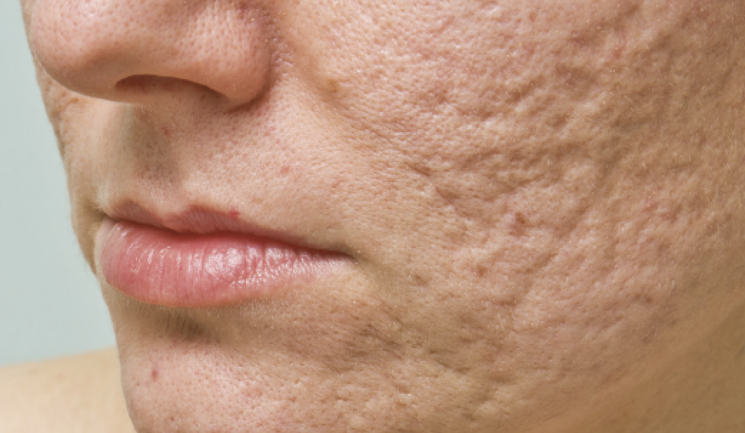 Across the globe acne is an enormously common problem; the Global Burden of Disease Project estimates that it affects 9.4% of the world’s population, making it the eighth most prevalent disease worldwide.1 Onset is most frequent in the post-pubescent period, but adult onset and continuity of the disease into adulthood can occur and it is becoming more frequently recognised.2

Acne is a chronic inflammatory disease of the skin’s specialised sebaceous follicles, which are found predominantly on the face and trunk. Hormone-mediated increased sebum production, obstruction of the follicle by desquamation of the follicular epithelium and colonisation of the sebum by the bacteria propionibacterium acnes result in microcomedo formation, and these can progress to become comedones and inflammatory skin lesions.3,4

One of the recognised consequences of acne is persistent scarring. This affects up to 20% of teenagers4 and facial scarring is present to some degree in 95% of acne sufferers, with similar incidence in both sexes.5 When acne is severe and/or when successful treatment is delayed, it can result in significant, disfiguring scarring.4,5 Although frequently dismissed by both the medical community and general population, this scarring can be very detrimental to the emotional and psychosocial wellbeing of those affected, leading to anxiety, depression and even suicidal feelings.6

Unfortunately, given its prevalence and both physical/psychological sequelae, no single effective treatment is available to combat acne scarring.7,8 Many different strategies, including topical steroids, laser resurfacing and surgical excision, are in use by dermatologists, plastic surgeons and others across the aesthetic medicine community to address it.7,8

Percutaneous non-ablative collagen stimulation by microneedling is a technique that has been successfully used to treat atrophic scarring from acne and other aetiologies (e.g. chicken pox),7-11 and combining this process with platelet-rich plasma (PRP) is an promising recent development. A small prospective observer blinded study was recently performed by Yadav et al., which compared microneedling alone with microneedling with PRP. Results showed both a qualitative and quantitative advantage in those receiving PRP, but this did not achieve statistical significance. However, patient satisfaction in the two groups was higher for those receiving PRP and this parameter was statistically significant.12 The remainder of this article will set out the rationale for combining PRP with microneedling and how it can be applied in clinical practice.

There are three broad categories of acne scarring:

Atrophic scars, where there is a net loss of collagen, make up the bulk (up to 90%) of facial acne scars. Hypertrophic and keloidal scars are found predominantly on the torso particularly the shoulders and back. Atrophic scars can be further subdivided into the following groups:12

It should be noted, however, that differentiating between atrophic scar types can be difficult, and patients often present with scars of differing types that co-exist.13

The reason it is important to determine the category of scar is that, in practice, it is atrophic scars that are the target for microneedling/PRP. In my experience, as well as the published literature,7,13,16,19,20 it is shallow box car scars and milder forms of rolling scars that respond particularly well to this treatment modality. However, in my experience, all scar types should show some improvement.

How does microneedling work and why add PRP?

Microneedling is a well-established and frequently performed aesthetic technique. It is a form of percutaneous, non-ablative collagen induction therapy. Thousands of microchannels are created using either a dermaroller or electronic microneedling device. These channels reach down to the papillary dermis, but effectively spare the epidermis and stratum corneum, thus preserving barrier function.13,14

Both the injury response, with growth factor and cytokine release, and changes in epidermal/dermal electrical potential have been postulated as mechanisms for the fibroblast migration/activation that has been shown to occur after microneedling. 16,18-20 The in vivo effects of this fibroblast stimulation include collagen deposition and neo-angiogenesis, which can continue for up to one year. With successive treatments, collagen deposition in areas of atrophic scarring can result in tissue remodelling and smoothing of the skin.17,18

PRP is plasma that contains an increased concentration of platelets. For optimal clinical use this should be in excess of 1x106 platelets/μL, which represents an enrichment of 300-700%.16 PRP is produced by the fractionation of whole blood using a centrifuge. Multiple commercially-produced kits are available to assist/standardise production, but reproducible non-proprietary techniques are also described in the literature.16 PRP contains a high concentration of platelet growth factors, which are released when the platelets in the PRP are activated. In aesthetic procedures, this occurs when the PRP interacts with collagen after it is administered and routine exogenous activation (e.g. with calcium chloride or thrombin) is not needed. Key growth factors that are released include platelet-derived growth factor (PDGF), transforming growth factor (TGF) and insulin-like growth factor, as these all promote collagen synthesis and fibroblast activation.16,18-20

Given that, as described above, microneedling relies upon the tissue healing mechanism for its effects and that key growth factors involved in that process are released by PRP as it is activated, it would be reasonable to hypothesise that microneedling and PRP could act synergistically. Although there is a lack of robust clinical trial data, several small studies have shown that microneedling is more effective at treating acne scarring when used in combination with PRP than when used alone.7,16,18-20 and that has certainly been my anecdotal experience. As an example, Asif et al. took a sample group of 50 patients with acne scarring and performed a concurrent split face study comparing microneedling/intradermal PRP injections with microneedling/intradermal injections of distilled water; the right half of the face being treated with the former technique and the left with the latter. In this very small study there was a greater improvement in the qualitative and quantitative scores (using Goodman’s scoring system for acne scarring) on the side treated with miconeedling/PRP. An ‘excellent’ degree of qualitative improvement was seen in 20 PRP-treated cases compared with five cases of microneedling/distilled water and a quantitative improvement of 62.2% (PRP) vs. 48.5% (distilled water).16

Technique and tips for success

As with many procedures one of the key determinants of a successful outcome is initial patient selection. It should be remembered that microneedling/PRP is only one technique at our disposal and is not suitable for everyone. Each patient for whom this combination technique is being considered should be carefully assessed clinically and meticulously photographed.

I advise patients that they should expect multiple treatments, usually at least three separated by one month and that we do not anticipate immediate results as, in my experience, it can take up to four weeks for any improvement to become apparent. Keeping each patient on board and compliant with the proposed treatment plan is vital to success.

As a stand-alone technique, I have achieved my best results in patients with box car scars and rolling scars that demonstrate only minimal tethering, this is in keeping with the published literature.12,13 I now consider this to be my first-line approach in those situations. However, it is a technique that can be easily combined with other strategies, such as subscision of more severely tethered rolling scars and trichloroacetic (TCA) application to ice-pick scars.

One of the really appealing characteristics of this treatment is that it uses autologous blood rather than an exogenous product that might be deemed ‘unnatural’ by the patient. However, patients are often perturbed by the fear of venesection and by the thought of seeing their own blood. They also might be concerned about the effects that ‘blood loss’ might have if they pursue this treatment. Do not underestimate these anxieties and overcome them with careful explanation; a warm, calm, comfortable environment and a confident demeanour, remembering that venesection is an important skill and that practice makes perfect.

When I first started to offer PRP-based therapies at my clinic, we tried out several of the commercially available kits and found them all pretty user-friendly and effective. However, we did find them to be expensive, although competition does appear to be driving kit prices down. As a result, when the size of my practice increased, we chose to go down a non-proprietary route and now use our own in-house, closed system, double spin technique modified from that described by Amable et al.,21 using ACD (acid citrate dextrose) anticoagulated vacutainer tubes for blood collection and a non-refrigerated centrifuge.

As per the Amable et al. technique we incorporate a soft spin of 300xg for five minutes to deplete the sample of red cells/leukocytes and a hard spin of 700xg for 17 minutes to produce a platelet pellet that can be resuspended in a minimal volume of supernatant. I audit my platelet yields regularly and have found this to be a reproducible technique, with platelet yields in excess of 1.5x106 platelets/μL.

Typically, we acquire 24ml (three 8ml tubes) of venous blood from an antecubital fossa vein using a 22G butterfly and vacutainer system. From this we harvest 3ml of product. Topical anaesthetic (9.6% lidocaine) is applied in a thick layer over the face and left for 30mins; then, using a mesotherapy gun and nappage technique (multiple serial superficial injections of a small quantity of PRP), we distribute 2ml of PRP intradermally, treating the whole face, but concentrating on any specific areas of scarring. After this, we mix 1ml of PRP with non-crosslinked hyaluronic acid, which thickens it, rendering it more usable, and use this as a serum during microneedling.

Both dermarollers and electronic microneedling devices can be used for this treatment. I use an electronic device as it is available in clinic, but I am not aware of any studies demonstrating statistically significant superiority of one device over another in this setting.

This is a very well-tolerated technique with minimal downtime. With adequate topical anaesthesia, periprocedural discomfort can be successfully minimised. Some post-procedural erythema and oedema is expected, and in my experience this can persist for several days. Contraindications to this treatment include active acne, anticoagulation and bleeding disorders, active herpes labialis infection and a tendency to keloidal scarring.9

Atrophic acne scarring is a common and frequently challenging medical problem that often has significant psychosocial consequences for those affected. Treatment must be tailored to the individual and is likely to involve multiple different strategies. In my clinic, we now include microneedling combined with PRP as a first-line therapy because it is a well-tolerated, relatively inexpensive, highly reproducible technique with few side effects and it can be easily combined with other treatment modalities. Most importantly, in my anecdotal experience, it can significantly improve the severity of acne scars, particularly those with a box car or rolling morphology, resulting in reduced patient distress and an improved quality of life.

In future, it is my hope that a multicentre, large-scale double blind controlled trial could be performed to provide a stronger evidence base for this exciting new treatment.