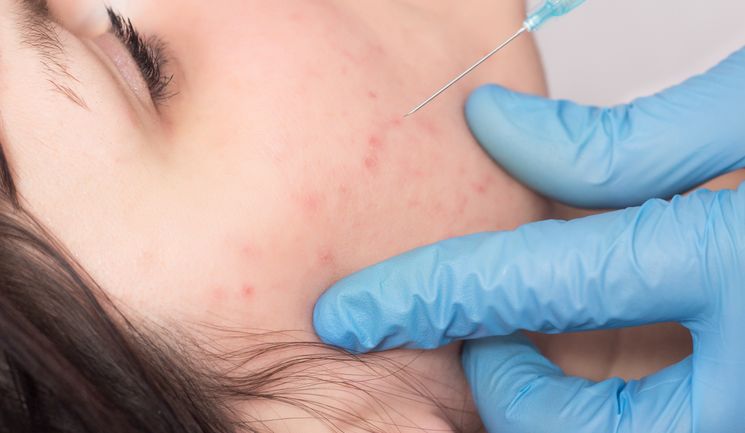 The use of botulinum toxin for reducing facial wrinkles is one of the most common treatments in medical aesthetics. However, the potential use of this medication to treat other skin problems such as acne or oily skin is lesser known. This article aims to explore the way in which botulinum toxin could be a used as a tool in future to help patients with acne.

As a dermatologist, I have two groups of patients coming to my practice – those who seek antiageing and rejuvenation treatments and those who are suffering from skin conditions. One of the most common dermatological problems patients experience is acne, and we need to remember that acne is not only a problem of teenagers. Research shows that approximately 85% of acne cases occur mostly during adolescence, but it can persist into adulthood, with a 50.9% prevalence rate of acne in ages 20-29 years and 26.3% in ages 40-49 years.1 Acne vulgaris is a disease of the pilosebaceous unit. There is mix of many factors that play a role in developing acne: overproduction of sebum, seborrhoea, change in keratinisation pattern in the pilosebaceous unit, colonisation of Propionibacterium acnes in sebaceous glands and inflammation.2

The sebaceous gland is an exocrine gland in the skin that produces a mixture of an oily matter that lubricates hair and skin and plays an important role in thermoregulation. The glands can mostly be found on the face and scalp.2 Each hair follicle is surrounded by one or more sebaceous glands, which are encircled by a muscle called arrector pili. Those elements form a pilosebaceous unit. A branch of sebaceous ducts deposit sebum to the skin’s surface and the activity of sebaceous glands increases during puberty as a result of higher levels of androgens. Excess sebum production and change in keratinisation in the pilosebaceous unit lead to the formation of comedones, which are one of the first manifestations of acne.3

Efficacy of botulinum toxin Botulinum toxin type A (BoNT-A) is one of the toxins produced by Clostridium botulinum. This neurotoxin inhibits the release of acetylcholine.4 BoNT-A has been shown to decrease sebum production and reduce pore size in patients with oily skin. In a retrospective analysis of 20 patients treated with BoNT-A, 17 noted an improvement of pores size and sebum productivity at one month after injection.5 However, it is not entirely clear why decreased sebum production follows BoNT-A injections, because the role of acetylcholine on sebaceous glands is not well defined. Most likely it is because the arrector pili muscles and the local muscarinic receptors in the sebaceous glands are targets for the neuro-modulatory effects of BoNT-A.6 This indicates that BoNT-A may block the activity of acetylcholine in sebocytes.

In one study, 42 volunteers with forehead wrinkles received 10-20 units of BoNT-A, which was administered in five standards injections. The study suggested that the sebum production has a positive correlation with the distance from the injection point. It concluded that intramuscular injection of BoNT-A significantly reduces sebum production at the injection site but increases the sebum production of the surrounding skin at a radius of 2.5cm at the two, four, and eight-week follow-ups. The efficacy did not improve with higher dosages.7

Another study evaluated the safety and efficacy of intradermal injection of BoNT-A for the treatment of oily skin. In the study, 25 subjects were treated with BoNT-A injection in the forehead and post-treatment production of sebum was measured with a sebometer. The results showed a significant reduction in sebum production and high patient satisfaction.8

As we are still learning about the role of acetylcholine in sebaceous gland function, we can observe that BoNT-A helps to control chronic migraine, hyperhidrosis, muscles contractures, cervical dystonia and bladder dysfunction. All of these desirable effects are due to blocking acetylcholine release.9

In my clinical opinion, BoNT-A seems to be a safe and effective way to help patients with oily skin and acne, although I think this approach deserves more research. In my practice, I have performed many BoNT-A injections aiming to reduce forehead wrinkles as well as their oily skin and pore size. Therefore, when patients present with both concerns, I recommend this approach, especially in adults as I often find that they don’t tolerate typical acne treatments well due to associated side effects such as skin dryness and irritation.

Not every patient with acne is a candidate for BoNT-A treatment. The main contraindications for BoNT-A include patients with myasthenia gravis, amyotrophic lateral sclerosis, multiple sclerosis, Lambert- Eaton syndrome, women who are pregnant and breastfeeding, neonate and children, patients with focal and systemic infections, patients who are hypersensitive or allergic to BoNT-A and patients who have previously undergone lower eyelid surgery.11

It is not recommended to inject infected skin, so patients with severe inflamed or cystic types of acne should not be treated. In these patients, the inflammation and infection must be reduced with a standard dermatological treatment first, then BoNT-A can be considered. More research needs to be done to establish the correct dosage of BoNT-A in acne management. As BoNT-A is frequently used to treat forehead, glabella and lateral canthal lines, the standard dosage can be administered safely on those zones and help with skin problems in those areas.

However, many patients commonly present with acne on other areas such as the cheeks or nose as well, which causes the treatment to be more complicated. Practitioners can’t put standard dosages in those areas as, from my observation, it can cause side effects such as paralysing the levator anguli oris muscle, resulting in a drop of the mouth corner.

It’s not only the dosage that is important when treating acne skin with BoNT-A. For an effective treatment, the injection technique and placement are very important. A procedure that facilitates the correct placement into the dermis is inserting the needle at a 75° angle and considering the extrusion of toxin from adjacent pores as an endpoint.12

I believe the ideal BoNT-A treatment protocol for patients with acne would be to use a minimal effective dosage of BoNT-A and be able to administer injections across the whole face in multiple points close to each other.13 The answer could be microbotox, which is also known as mesobotox. This type of treatments involves much lower dosage of BoNT-A than standardly used, allowing practitioners to inject in off-label indications areas.14

Microbotox is a technique that involves tiny blebs of botulinum toxin, and appears to be a potentially suitable technique to treat acne and oily skin not only on the face, but in areas such as the chest or back.15,16,17 It refers to the injection of multiple microdroplets of diluted BoNT-A into the dermis, or the interface between the dermis and the superficial layer of facial muscles at 0.8-1.0cm intervals.15,16 The intention is to decrease sweat and sebaceous gland activity to improve skin texture and sheen, as well as to target the superficial layer of muscles that find attachment to the under surface of the dermis, causing visible rhytids.

The technique has been utilised successfully in the upper face and mid-face, and more recently in the lower face and neck. It also provides the ability to control sweat and sebaceous glands, resulting in smoother skin.15,16,17

The microbotox solution is mixed in the syringe by adding a small volume of lidocaine to the calculated dose of BoNT-A drawn from a standard bottle of BoNT-A prepared with 2.5ml of saline. Each 1ml syringe of microbotox solution contains 20-28 units of BoNT-A per ml of solution and is used to deliver 100-120 injections. The lower face and neck will usually require 1ml per side. The injections are delivered intradermally using a 30 or 32 gauge needle raising a tiny blanched weal at each point.15

BoNT-A for acne treatment is a very interesting concept. Although the dosage we use to treat forehead lines, glabella and lateral canthal lines can also be effective in reducing pore size and sebum production, there is still not enough information and research to be able to safely treat other zones with acne.

Outside the forehead and eye area, it seems that the most probable way of treating acne skin would be a microdroplet technique with BoNT-A reconstituted in greater volume of 0.9% sodium chloride, distributed in multiple injection points close to each other.

As we can see through available data, the approach looks very promising and in future we could have a new alternative mainstream treatment for patients suffering of acne or oily skin.