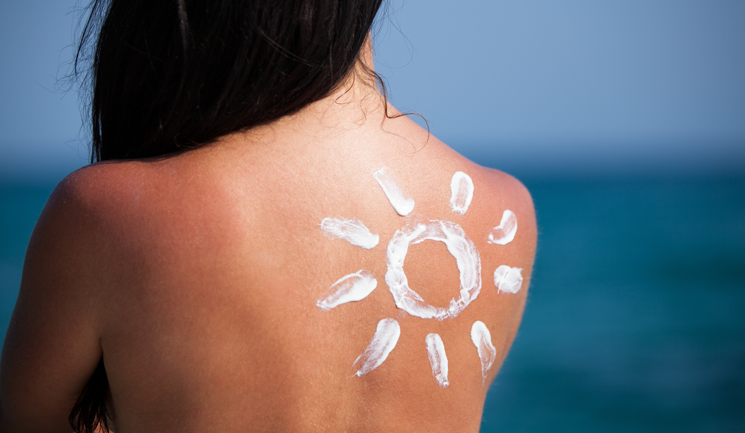 Photoageing refers to skin damage and skin ageing caused by intense and chronic exposure to sunlight, specifically ultraviolet A (UVA) and ultraviolet B (UVB) rays.1 Accounting for the majority of age-associated changes in the appearance of the skin, it is the superposition of chronic UV-induced damage on natural ageing.2 The photoageing process is caused by receptor-initiated signalling, mitochondrial damage, protein oxidation and telomere- based DNA damage responses, displaying as variable epidermal thickness, dermal elastosis, decreased/fragmented collagen, increased matrix-degrading metalloproteinases, inflammatory infiltrates and vessel ectasia.2 It can be characterised clinically by the skin’s coarseness, wrinkling, mottled pigmentation, skin laxity, telangiectasia, and premalignant and malignant neoplasms.3
One visible sign of photoageing is through the development of solar lentigines, more commonly known as ‘sunspots’. Solar lentigines are considered one of the earliest signs of photoageing and are a common aesthetic complaint.4 Most frequently found in sun-exposed sites, they are regularly seen in areas such as the face, shoulders and the backs of the hands, and usually have a uniform shade of brown, often seen in older fair-skinned patients who have had excessive sun exposure.5
The pathological features of a solar lentigo consist of a linear increase in melanocytes at the dermal-epidermal junction, but no cytological atypia of these melanocytes, and no budding down of these cells into the underlying dermis. There is frequently associated actinic damage to the adjacent dermal collagen.6

It is essential that a definitive diagnosis is made, indicating that these pigmented flat lesions on the hands and face are harmless and are not showing any signs of progression to skin cancer, such as lentigo maligna.4
The features of a simple lentigo are usually of a uniformly brown flat macule, most often on the face or on the dorsum of the hands. Benign solar lentigos tend to be uniform in colour with well- defined margins and no history of change within them. A history of there being any change in shape, size or colour associated with a pigmented lesion should lead to concern that this lesion may not be benign or may require further investigation. There needs to be a low index of suspicion as to whether further investigations, such as excision and submission to histology, is required.
However, a clinical diagnosis can be made more difficult to ascertain due to pigmented actinic keratosis, lichen planus-like keratosis and lentigo maligna, which each may appear in similar forms.7 It is only when one is confident that a pigmented lesion is benign that one can then consider the best form of treatment. Although successful removal of these lesions can be achieved, as will be discussed below, the ability to distinguish a benign pigmented lesion from a malignant lesion is very important and requires appropriate training. Stankiewicz et al reported three cases of pigmented lesions that had been referred to a clinic for laser removal of these lesions on the face, and fortunately were recognised to be suspicious and diagnosed as melanomas.4
A French study further found that multiple solar lentigines on the upper back and shoulders of adults could serve as clinical markers of previous severe sunburn, and indicated that it may be used to identify those at a higher risk of developing cutaneous melanoma.8

The application of sunscreen helps decrease the rate of appearance and the darkening of solar lentigines, and limiting one’s exposure to sun tanning and the use of artificial sources
of UV light may help prevent them. The application of a liberal quantity of sunscreen has been shown to be by far the most important factor for effectiveness of the sunscreen, followed by the uniformity of application and the specific absorption spectrum of the agent used.9

It was suggested that first line therapy in terms of physical treatment for solar lentigines was ablative therapy with cryotherapy, and the occasional use of topical treatments with substances such as retinoids (Adapalene and Tretinoin) have been suggested to provide lightening of lentigines.10 Studies have indicated that a topical agent containing a combination of a retinoid, phenol agent and an antioxidant, was well tolerated and showed a significant improvement in the depigmentation of solar lentigines.11 A triple combination cream with fluocinolone acetonide 0.01%, hydroquinone 4%, and tretinoin 0.05% as adjuvant to cryotherapy for solar lentigines on the dorsal hands was also found to be effective.12 Finally, the effect of a bleaching solution containing 2% mequinol (4-hydroxyanisole, 4HA) and 0.01% tretinoin (Solagé) applied twice daily for three months, on solar lentigines which were present on the back of one hand, demonstrated a significant lightening effect after two months of treatment, and was maintained at least two months after stopping treatment.13

Some patients, particularly with darker skin types, can experience hypopigmentation or a recurrence of pigment.14
Many consider the first-line therapy for solar lentigines to be ablative therapy with cryotherapy.10 This procedure is often successful because of the susceptibility of melanocytes to freezing with liquid nitrogen; while squamous cells resist injury at -20°C, melanocytes freeze at -4 to -7°C.10 In one study, the efficacy and safety of cryotherapy and trichloroacetic acid (TCA) were compared. It was found that cryotherapy showed more positive results than the TCA 33% solution for treatment of sunspots on the back of the hands, and this was particularly effective in lighter-complexioned individuals. It was suggested that for darker complexions, TCA 33% may be preferred. However, it was further stressed that post-inflammatory hyperpigmentation remains a risk for both modalities.15

Intense pulsed light (IPL) devices emit polychromatic light in broad ranges of wavelengths and are selectively filtered to target specific chromophores. Kawada et al confirmed that a broadband (non-coherent in terms of pulsed light) source also led to over 50% improvement in lentigines, though while the smaller solar lentigines responded well, the larger patches showed lack of response. Ephelides or freckles responded very well with 75% of patients showing more than a 50% response.16 In another study of 22 pigmented lesions, a marked improvement was obtained in 17 cases, with a moderate improvement showing in four cases and a slight improvement in one case. It further claimed that no undesirable effects were observed.17

Various lasers produce beams of light that emit specific wavelengths, which are then absorbed by melanin, the chromophore found in solar lentigines, and converted to heat.18
The development of short-pulsed, pigment-specific lasers to selectively destroy the pigment within the solar lentigo has led to significant clinical improvement, a low risk of high patient acceptance and adverse effects.19 Various studies have shown lasers to be one of the most effective forms of treatment for this indication. Schoenewolf et al noted that the Q-switched ruby laser has been highly effective in the treatment of lentigines on the dorsum of the hands, which is the site where many individuals seek treatment.20 Todd et al7 also found that the frequency doubled in the Q-switched Nd:YAG laser was most likely to provide significant lightening with the fewest adverse effects. It highlighted that out of 27 patients, 25 preferred laser therapy to cryotherapy.21

An alternative approach to removing these solar lentigines has been by laser ablation using erbium-YAG or pulsed CO2 lasers. These lasers remove microns of tissues accurately and thereby often remove the epidermis, down to the reticular dermis. Following this, a new layer of skin forms which is no longer pigmented.20 Fractionated lasers are some of the newest technology in laser rejuvenation. This is where the light is broken up and delivered in neat individual columns, which allow for quicker healing. The new fractionated ablative systems have also been very helpful in this area, leading to less downtime with a good response to treatment.20 A study using a non-ablative 1927 nm fractional resurfacing laser indicated that, after two treatments, it had produced moderate to marked improvement in the overall appearance of facial pigmentation with high patient satisfaction. It further indicated that response to treatment was maintained at one and three months follow up, suggesting this to be an effective technique for treating solar lentigines.22

The ‘sunspot’ or solar lentigo is a commonly acquired pigmented lesion most often seen on the sun-exposed areas such as the face and the dorsum of the hands, and is a key sign of photoageing. However, before any treatment is confirmed, the practitioner considering administering treatment must be well-trained in the diagnosis and treatment of pigmented lesions, as skin cancers can be missed and treated inappropriately.
Once an appropriate diagnosis of a benign solar lentigo has been made, there are then various options of treatment as outlined in this article that can be considered. Laser treatment has significantly improved the outcome of these treatments and is safe and effective in appropriately trained hands.19,20,21