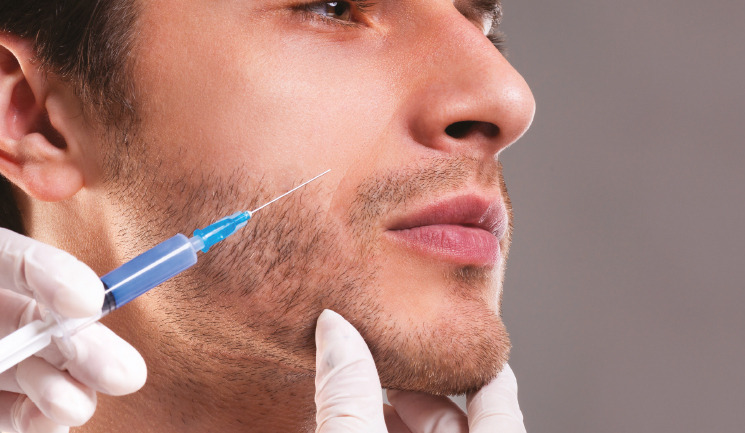 The number of men who are interested in and who are seeking aesthetic treatments has been on the rise over recent years.1 As life expectancy increases, our expectation and demands in our mature years have dramatically changed. We now expect to continue to be competitive in our work as well as active in our social and family lives for longer than our parents and grandparents. Improvements in the quality of non-surgical treatments with better products with greater longevity, improved techniques, and minimal downtime make non-surgical treatments more appealing. One may argue that we now enjoy a greater cultural acceptance of aesthetic treatments, which has undoubtedly contributed to higher numbers of men seeking treatment.2

Commonly, male patients seek aesthetic treatments to not only look younger or less tired, but also to improve their competitiveness in their work environment, as youth is seen as a desirable quality and vitality often equated to productivity.3,4

It is essential for the aesthetic practitioner to understand how to enhance or rejuvenate male patients with dermal fillers and how their treatment approach needs to differ to that of females. For example, practitioners can often misunderstand the proportions of the male cheek, and it is commonly said that the male cheek has more anteromedial projection and women have more lateral projection.5,6

This article will explore the assessment of the male mid-face, pertinent dermal filler treatments, how the male mid-face ages and some key differences you should consider compared to treating female patients.

Male vs female ageing in the mid-face

Just as the influence of oestrogen will produce the characteristic physiognomy in females, similarly testosterone produces features that we regard as typically masculine. These include heavier brows, thinner cheeks, bigger squared off jaws and chins.7

From a skeletal perspective the male zygoma is flatter anteriorly compared to the female zygoma which is fuller, higher, and more projected in all dimensions. Male cheeks are less projected and have less fullness in the anteromedial area.8,9

Male ageing is more linear; for instance, it occurs at a steadier pace when compared to female ageing,10 whereas female volume loss and atrophy will accelerate in the perimenopausal period.4

The ageing process in men results in a redistribution of volume from lateral to medial, creating more fullness in the anterior mid-face noticeable in the area nasolabial fat.5

Periocular ageing is a common concern in male patients. This is attributed in part to a prominent supraorbital ridge and deeper set eyes in men and the projection of the subciliary muscle which occur naturally and typically in the male face. Therefore, the tear trough may appear deeper in men and does not always need to be corrected.4,5

The maxilla and masseter are prominent in men. The zygomatic arch and masseter are dominant with a zygoma:soft tissue ratio of 1.1:1.5 The male profile will help establish the contours and vectors of the mid-face. Projection in all directions of a round and high cheekbone is seen in women and is considered a feminine feature with a zygoma:soft tissue ratio of 2:1.5

The periocular region sees the most changes men experience with ageing. The lower eyelid is mostly affected, infraorbital thinning with increased periocular fat leads to an increased appearance of infraorbital hollowing. The orbital aperture increases with age in both area and width.4

Dermal fillers can be used successfully in the male cheek. The treatment strategy should involve the use of a high G-prime, highly cohesive volumising dermal filler. The treating clinician may use a needle, cannula or a combination. In our clinical experience, a multi-layered approach, for instance, deep supraperiosteal and subcutaneous injections may be employed to maximis the soft tissue loss. The injection sites in male patients along the zygomatic arch should be lower and less volume should be injected than in the female face – with a view to correction only and an avoidance of over projection and the appearance of ‘fullness’ which can have a feminising effect.6,9 The zygoma should also extend laterally to the hairline, further accentuating the desired angular appearance.

When treating the ageing process in the male patient with dermal fillers, volumisers should be used to create lateral support and increasing anterior cheek volume should be avoided in most cases. Lateral volume restoration should be along the inferior border of the zygoma in small amounts to avoid over projection and to respect the natural proportions of the male cheek.5,6 Injection of dermal filler directly into the nasolabial fold in men is preferred in most cases to soften its appearance.6

The male mid-face has more emphasis on the zygoma and zygomatic prominence, creating a more clear-cut irregular surface with little to no anterior projection.6,9 Men’s cheeks are flatter in all directions and should not be altered in this regard if feminisation is not the aim of treatment. The goal is accentuation and not exaggeration.

In men, an even distribution between the medial and lateral cheek is more appropriate (ratio of 1:1). The cheek apex sits more medially compared to the female face, with a wider-based malar prominence.5 Overcorrection may lead to a more feminine appearance.

Other methods of mapping the mid-face have also been described in literature. For example, the malar eminence can be located using the Hinderer method or Wilkinson method.3

The Hinderer line (Figure 2) defines the anteromedial border of the cheek mound and is composed of one line drawn from the lateral commissure toward the ipsilateral lateral canthus and another line from the alar to the ipsilateral infra-tragal notch. The intersection of these two lines denotes the apex of the malar eminence.3

The Wilkinson method (Figure 3) consists of a vertical line drawn from the lateral canthus to the edge of the mandible; the malar eminence is located about one-third down this line. In addition to the location of the malar eminence, it is important to appreciate the anterior projection of the cheek. In men, the ogee curve, an s-shaped curve from the cheekbone to the mid-cheek hollow tends to be flatter in its lower concavity.5

Men have an even distribution between the medial and lateral cheek. The male mid-face is flatter in all directions and should not be altered in this regard if feminisation is not the aim of treatment. The antero-medial projection is flat, more medial and with a lower positioned cheek apex, compared to the female cheek.

The goal of any male mid-face treatment is accentuation and not exaggeration. The ageing process of the male mid-face sees a redistribution of volume from lateral to medial. This should be taken into consideration when carrying out a rejuvenation treatment with dermal fillers, by injecting along the lower zygomatic arch using low volumes.

Ageing is more linear and occurs at a steadier pace in males compared to female ageing. The periocular region sees the most changes men experience with ageing and is one of the most common areas of concern.