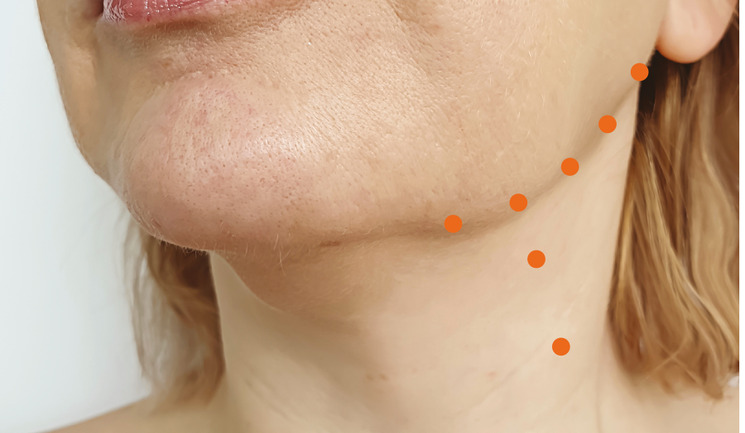 The lower third of the face often shows the most undesirable ageing signs, such as deep oral commissures, loss of definition of the mandibular arch and pronounced platysmal bands.1 In my experience, the Nefertiti Neck Lift provides a good treatment option to target these signs of ageing.

The technique was first described by dermatologist Dr Phillip Levy in 2007, named after Queen Nefertiti of ancient Egypt.2 Nefertiti translates to ‘the beautiful woman has come’, with relevance to elegant lines of the jaw and neck. The procedure involves injecting botulinum toxin A (BoNT-A) primarily into the platysmal neckbands, the depressor anguli oris (DAO) muscle, and the skin of the jawline to produce a more youthful, smoother, and contoured appearance without surgery. It tightens the skin of the jawline, softens neck jowls and improves skin laxity, providing a visual effect of a ‘mini-lift’.2,3 Patient satisfaction is extremely high with this technique, and the specificity of dosing has led to a low incidence of adverse effects.2,4,5

The platysma muscle of the neck varies considerably in thickness and extent between people. It is composed of two separate broad, thin sheets of muscle running up the front and lateral neck from the upper chest to the mandible, fusing and blending its fibres with the superficial muscular aponeurotic system (SMAS) superiorly in the face.6

The fibres of the platysma perform a number of depressive actions. The anterior portion and thickest fibres of the platysma blend with the perioral muscles and so can pull the lower lip and corners of the mouth downward and laterally.2,6 The pars labialis fibres continue within the tissue of the lateral half of the lower lip – they interdigitate into the muscles around the angle of the mouth (orbicularis and risorius), the chin (mentalis), and the depressors of the lower lip (depressor labii inferioris and especially the DAO).6,7 Active fibres of the upper platysma (pars mandibularis) can blunt the jawline.1

There are two distinct fat deposits that play an important role in the ageing of the neck – the submental fat pad (anterior to the platysma muscle) and subplatysmal fat (deep and posterior to the muscle).1,5 Patients with mild/moderate submental fullness with the platysma covering the entire submental region will respond almost entirely to BoNT-A treatment, as relaxation of the protruded anterior bands will tighten the muscular fibres overlying the fat pad and push it back into place.1,5

In addition to skin ageing through reduced collagen deposition and environmental factors, the skin of the face and neck consequently becomes lax and drapes in the lower face, over the mandibular border, overhanging and blunting the cervicofacial angle.6,8 The downward pull of the platysma contributes to the formation of jowls and multiple rhytides, as well as loss of definition of the chin and jawline. Gravity also contributes to the changing appearance of the thin, lax and less elastic skin of the aged neck, accentuating the neck lines and, coupled with fat volume depletion, leads to noticeable ageing of the neck.2

Patients who contract the platysmal bands habitually when speaking respond best to this treatment.8 They are usually slim build patients aged between 30-60 with pronounced bands, and do not present with any significant complex asymmetries during animation as there is a greater risk of complications.1,2,3 They have early signs of jowling and loss of skin elasticity around the mandibular region, forming the visible so-called ‘turkey neck’. The presence of excessive fat on the mandibular border can reduce the efficacy of the treatment.1,2,4 Asking the patient to pull down hard on the platysmal muscle by protruding the lower jaw and observing the disappearance of the mandibular border provides another good indication for successful treatment.2,6,8

The Nefertiti Neck Lift treatment is contraindicated in patients with a history of neck injury or where the neck platysmal muscle has hypertrophied to support a weak neck, as the risk of weakening the neck further here would be detrimental. In addition, as with other BoNT-A treatments, they are not suitable for those who are pregnant or breastfeeding, those with a known sensitivity to BoNT-A and/or have neuromuscular disorders.8

It is important to manage expectations to ensure the patient understands that the Nefertiti Neck Lift has minimal improvement on the horizontal neck lines. For this, other rejuvenation means can be used, such as soft hyaluronic acid fillers, mesotherapy or ablative procedures.1 A combination approach can be utilised to tackle multiple concerns of the neck, with the Nefertiti Neck Lift as an additional procedure to improve the aged appearance. For those with excessive skin laxity and hypertrophied platysmal bands, a referral for a surgical opinion should be considered.

It’s also important to make patients aware of the longevity of the treatment. Compared to treatment using BoNT-A in other areas of the face, several studies have shown better longevity of the Nefertiti Neck Lift result at an average of four to six months duration, depending on the precision of the injections, strength of the platysma, as well as the frequency and intensity of the patient’s neck movements.2,4,5

The use of BoNT-A to perform the Nefertiti Neck Lift is an advanced off-label treatment, making it important for practitioners to be fully trained on the technique and for patients to be informed during the consent process. The treatment can be performed using abobotulinumtoxin A (Azzalure/Dysport) that has a conversion of 2.5 units for every 1 unit of onabotulinumtoxin A (Botox/Bocouture), the latter of which will be referred to in this article. A dilution of 1.25ml bacteriostatic saline per 50 units with a resulting dose of 4 units per 0.1ml will be discussed.

In addition to thoroughly documenting the exact dosages and photographing the areas treated, I recommend taking photos of the pre-injection markings to improve reproducibility with repeat treatments. Use of a cosmetic marker to demarcate the injection points improves precision and reduces the risk of asymmetry, in my experience.

During the procedure, the patient should be in a sitting or semi-reclined position which is both comfortable for them and practitioner.2 This allows the patient to contract the platysmal bands and the DAO actively through grimacing or protruding the lower jaw.1,2,3 Following a full consultation, clinical photography and a detailed consent process, the skin can be disinfected thoroughly, and an aseptic technique maintained throughout. Pre-treatment with topical aesthetics (e.g. EMLA) is discouraged, as they can inactivate the activity of the platysmal bands, producing an inaccurate assessment of where to inject.1

To demarcate the sternocleidomastoid muscle, ask the patient to turn their head laterally either side. Ensure injection points are not placed here as to not prevent difficulty with neck movements and head positioning. In my experience, patient comfort can be improved by grasping each platysmal band individually between the thumb and index finger with the non-dominant hand. 2U of BoNT-A should be injected intradermally (at a 15-degree angle) at each point along the vertical band, starting approximately 2cm below the inferior border of the mandible centrally in the submental area, and approximately 1cm below the inferior border of the mandible, lateral to the origin of the DAO.6

Repeat injections at intervals of 1.5-2cm from each other, descending down the neck towards the border of the clavicle. Raising a small visible wheal indicates the correct superficial placement of the BoNT-A, which will reduce the risks associated with deeper injections such as diffusion into adjacent musculature.1,6,8 Throughout treatment, the midline portion of the neck around the laryngeal area is avoided to minimise the risks associated with inadvertent deeper injections in this region.2

Most patients will require around three to five injection points per platysmal band for adequate treatment. It is advised that only two bands per side of the neck should be treated in the first instance.6 Any other platysmal bands should be treated two to four weeks later, especially when 40U of BoNT-A has already been injected (dosages explained later).2 The DAOs are also targeted in the Nefertiti Neck Lift where indicated, to help raise the corners of the mouth, improving the youthful expression of the lower face. Further to this, treating the DAO with BoNT-A following dermal filler placement in this region works synergistically to prolong the filler longevity due to the reduction of strength of muscular movement.1

An improvement at the mandibular arch can be obtained by blocking the lateral platysma bands beginning with the very upper fibres that interdigitate with the facial muscular fibres.1,4 Injections should be placed posteriorly to a line drawn as a continuation of the nasolabial fold that is posterior to the lateral border of the DAO and anterior to the belly of the sternocleidomastoid.1,6

The success of the Nefertiti Neck Lift is due to the ‘facial lifting’ technique which involves manipulating the opposing effects of the platysma depressor muscles to allow elevator muscles to predominate to lift the face, with the long-term aim to strengthen them over time.1,6

Injecting with BoNT-A releases the downward tension on the jawline, alleviating the depressor effect and enhancing the unimpeded elevator muscles lifting action.4 This sharpens and redefines the mandibular border whilst also elevating the corners of the mouth, in addition to relaxing the upper platysma, producing the Nefertiti Neck Lift.2

With patients aged over 50, it is beneficial to treat regularly at four to six month intervals to avoid depressor muscles recovering (and allow muscular atrophy) so the elevators to strengthen over time, causing a long-term lifting effect.1,5 The Nefertiti Lift can also be used to correct jowl and platysmal band asymmetry after suboptimal rhytidectomy, though care should be taken due to the changes in anatomy following surgical intervention.5

The dosage of BoNT-A for the Nefertiti Lift varies depending on the severity of ageing, strength and number of the platysmal bands, as well as the length of the neck.3 A standard maximum dosage of 40U is recommended for the Nefertiti Lift in one sitting with 20U distributed evenly each side of the neck.1,4,8 There is scope for refinements with further BoNT-A at the two-week recall period to correct any asymmetry or lack of response from a particular platysmal band. This ensures a more predictable and reproducible treatment with minimised complications.2,4 More significant dosages between 40-50U for the Nefertiti Neck Lift can be introduced in a gradual manner on patients who have been previously treated, but this comes with a greater risk of complication due to increased potential for migration into the surrounding muscles.1,8

Treatment of the vertical bands of the neck and lower face with the Nefertiti Lift is usually safe, and there is low incidence of complications.2 When they do occur, this is usually as a result of either improper technique or excessive dosing.2,4

Though infrequent, bruising can occur1,5 and mild and transient neck discomfort or weakness can be noticed two to five days after treatment.2,5,6 In rare cases, dysphagia and dystonia have been reported.1,2,5,8 Other rare complications include an asymmetric smile, disruption of lip competence causing incontinence of food and liquids, dysarthria and dysphonia.1,6

Consider adding the Nefertiti Neck Lift to your offering

Rejuvenation of the neck using the Nefertiti Neck Lift technique is a minimally invasive, safe, and effective treatment with a very high patient satisfaction rate.4,5,7,8 It can act as a stand-alone procedure or in conjunction with lower face dermal filler augmentation to further improve treatment success.

The Nefertiti Lift is an excellent approach to incorporate into treatment plans and a useful skill to have in the armamentarium of aesthetic practitioners who have undergone the necessary advanced training to perform this procedure.