Vitamin C and the skin 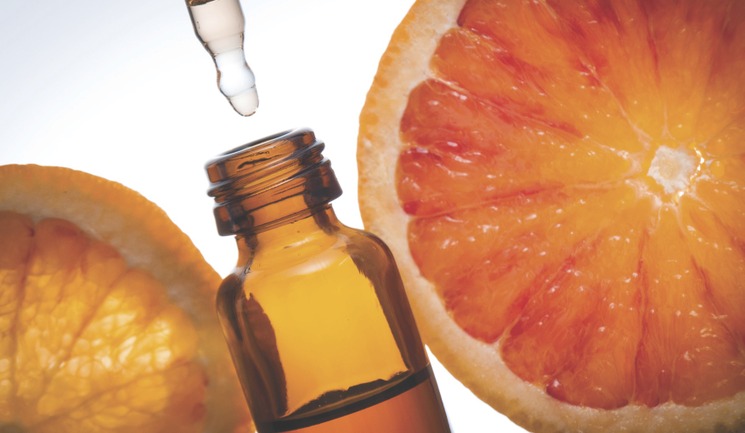 Anti-oxidants have become increasingly popular as cosmeceuticals due to the beneficial effects that they exert on oxidative stress and free radicals generated by exogenous factors such as pollution and solar radiation. Vitamin C is the main anti-oxidant in the skin and has been used extensively for this purpose. This article details some of the physiologic properties of vitamin C, as well as its main mode of actions.

Vitamin C is arguably the most well-known anti-oxidant in human skin. Its importance in health was signified in 1937 by Dr Albert Goyrgi who won the Nobel prize for identifying vitamin C as the main cause of scurvy. Unlike plants and some animals, humans are unable to synthesise vitamin C due to an absent enzyme called L-glucono- gamma lactone oxidase and therefore rely entirely on external supplementation either in the form of diet (citrus fruit and green vegetables) or topical application in the case of cosmeceuticals.1 The absorption of vitamin C in the gut is limited by an active transport mechanism and therefore despite high-intake doses of oral vitamin C, only a small fraction of it will eventually be biologically available and active in the skin, hence for any discernible role of its actions in the skin, it needs to be supplied topically.2

Bioavailability and kinetics of vitamin C:

Vitamin C is available in a number of active forms which include L-ascorbic acid, ascorbyl-6-palmitate, and magnesium ascorbyl phosphate of which L-ascorbic acid is the most biologically active and well-studied.1 Although all three types exert biological activity and an anti-oxidant effect, this is believed to be achieved, in part, by the conversion to the active form of L-ascorbic acid once penetrated through the stratum corneum. Unlike ascorbyl-6-palmitate and magnesium ascorbyl phosphate, which are lipophilic and stable but probably less biologically active; L-ascorbic acid in contrary is hydrophilic and unstable. The rate-limiting effect in magnesium ascorbyl phosphate is often its release from the vehicle and its conversion to biologically-active L-ascorbic acid.3
The hydrophilic nature means that L-ascorbic acid is poorly penetrated in the skin due to the impermeable hydrophobic stratum corneum. Furthermore, L-ascorbic acid is a charged molecule which will further limit the penetration.4 The instability of the molecule (i.e its degradation upon exposure to air and light) means that for L-ascorbic acid to be able to remain stable and penetrate through the stratum corneum it needs to be formulated in a way that provides both stability and permeability. An effective method of achieving this is by reducing the acidity (pH) of L-ascorbic acid below 3.5 which has shown to greatly aid in its penetration, largely due to the transformation to the uncharged form of the molecule.5 In one example of a currently available L-ascorbic acid product (from SkinCeuticals), the addition of ferulic acid aids in both stabilisation of the molecule as well as achieving an acidity of a pH below 3.5.4
The optimal concentration of vitamin C depends on its formulation, however in most cases for it to be of biological significance it needs to be higher than 8%.5 Studies have shown that a concentration above 20% does not increase its biological significance and in contrary may cause some irritation.4 The most available reputable products of vitamin C today are therefore in the range of 10 to 20% to exert an anti-oxidant effect and with lower concentrations for its role in anti-inflammatory conditions.
Continuous efforts are being made to be able to enhance efficient transepidermal delivery of the stable form of vitamin C. This includes the use of nanoparticles, microspheres (for graded delivery), and laser delivery.6

Vitamin C as an anti-oxidant:

It is now well known and accepted that environmental factors such as solar radiation, pollution, smoking, etc. can cause damage to the skin through the generation of so-called “oxidative stress”.7
This oxidative stress can cause damage to the skin in the form of dyspigmentation, the formation of “sunburn” cells, thymine dimers, solar elastosis, and up-regulation of a number of markers that lead to impaired cell cycle division.8
Trans-urocanic acid is a by-product of fillagrin present in the skin which acts as a chromophore for photons of radiation (mainly ultraviolet and to a degree infrared) leading to the formation of singlet oxygen. This will lead to a cascade of events leading to the formation of so-called “reactive oxygen species” or “free radicals”.9 These are highly toxic unstable molecules that can cause damage to the nucleic acids (main component of DNA), proteins, and cell membranes. Clinical manifestations of these effects include photodamage/photo- ageing and predisposition to skin cancer.2
Anti-oxidants act by neutralising the singlet oxygen cascade and therefore limiting the formation of reactive oxygen species. This occurs predominantly by a process of electron transfer/ donation.1,2 Anti-oxidants include a range of natural and synthetic products such as viamin E (alpha tocopherol), ferulic acid, phloretin, idebenone, green tea (polyphenols), resveratrol, lycopene, grape seed, niacinamide, ubiquinone, geinstein, silymarin, coffee berry, polyhydroxy acids, carotenoids, kinetin, and glutathione. Vitamin C is the most powerful anti-oxidant available for skin protection.10
In clinical and laboratory studies vitamin C has been shown to improve all parameters of photodamage and predisposition to skin cancer and these include, in particular, a reduction in solar radiation- induced erythema, “sunburn” cells and “thymine dimers”.1,5 A number of important products that are produced as a result of reactive oxygen species formation and cascade include: p53, activation of AP-1 (activator protein-1), Langerhans cells CD1a, thymine dimers, activation of Caspase-3 and Caspase-7.4 p53 is a cellular protein induced by solar radiation in response to structural DNA damage. Upon radiation, its levels will rise to try and slow down the cell cycle allowing for repair of the damaged DNA and the induction of a process of programmed cell death called apoptosis.11 Therefore raised levels of p53 indicate solar radiation- induced cellular damage and topical application of vitamin C has shown to decrease the levels of p53 upon radiation, a testimony of the photoprotective effects of vitamin C.4
AP-1 is a protein that is activated as a result of reactive oxygen species formation and leads to up-regulation of a number of proteases called matrix metalloproteases (MMPs).1 These proteases act to degrade and damage collagen in the dermis leading to some of the photoageing effects observed. Vitamin C has shown to inhibit the activation of AP-1 which would lead to a reduction in MMPs and a reduction in collagen damage. Langerhans cells CD1a are antigen- presenting cells present in the epidermis, which act by initiating a protective immune response. Their numbers are decreased upon reactive oxygen species formation and hence solar radiation can lead to a decrease in a particular cellular immune response. Products containing vitamin C have shown to prevent the reduction of these cells upon solar radiation, further demonstrating the anti-oxidant effect of vitamin C.12

Other effects of vitamin C on skin:

In addition to the anti-oxidant effect achieved through neutralisation of the oxidative stress, vitamin C has also demonstrated a number of additional beneficial effects on the skin. Vitamin C is essential for collagen biosynthesis and serves as a co-factor for prolyl and lysyl hydroxylase, important enzymes responsible for cross-linking and stabilisation of collagen fibres.13 Vitamin C has also shown to activate transcription factors such as pro-collagen mRNA that lead to collagen synthesis. Impairment of collagen has been observed clinically in the presence of vitamin C, and Scurvy is a great example of this.14 In summary, vitamin C exerts its beneficial effects on collagen both through collagen biosynthesis as well as inhibition of collagen breakdown through down-regulation of the activity of MMPs. Beneficial effects of vitamin C on elastin were also observed. Elastin is an enzyme that degrades elastic fibres leading to the characteristic appearance of photoageing known as solar elastosis. In vitro studies have shown that vitamin C inhibits the biosynthesis of elastin.15
An anti-inflammatory effect of vitamin C has also been observed both clinically and in cultured human cells. Laboratory studies have shown that vitamin C inhibits activation of transcription factor NF?B, a transcription factor responsible for the production of a number of pro-inflammatory cytokines such as TNF-alpha, IL-6 and IL-8. These cytokines are responsible for a number of inflammatory pathways implicated in certain dermatoses.16 Despite these anti-inflammatory effects, vitamin C is not primarily used in practice for inflammatory dermatoses. Vitamin C also plays a role as an anti-pigmentation agent. It interacts with copper ions at tyrosinase-active sites and inhibits the action of the enzyme tyrosinase – the main enzyme responsible for the conversion of tyrosine into melanin - and therefore can be used in anti-pigmentation treatment.17

Environmental triggers such as pollution, smoking, and in particular harmful solar radiation cause damage to the cells through the formation of reactive oxygen species. Vitamin C is the most powerful anti-oxidant in the skin and is able to provide photoprotection through neutralisation of the oxidative stress cascade. This photoprotective effect is complimentary to the “sunscreen effect” provided by the application of sunblocks, the latter absorbing or reflecting ultraviolet light but not primarily neutralising free radicals. Objective parameters studied in laboratory setting have shown a reduction in a number of parameters that correlate to photoaging, all of which are reduced by the use of vitamin C. Furthermore, vitamin C has shown to have beneficial effects in collagen synthesis as well as anti-inflammatory and anti-pigmentation effects. A number of different formulations exist with L-ascorbic acid proving the most biologically active when formulated appropriately.