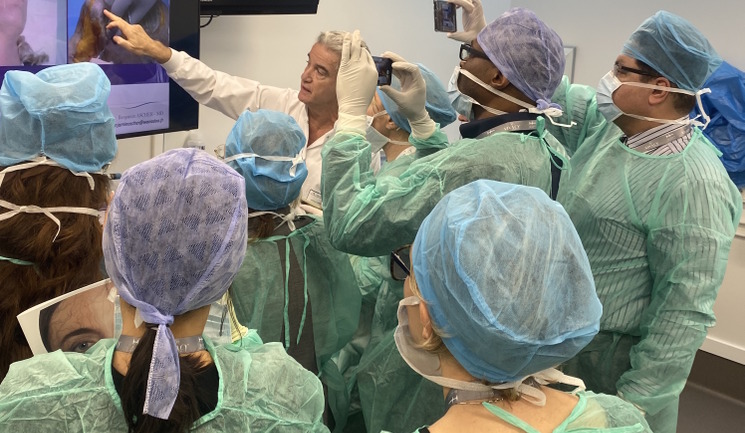 On November 22, French injectable manufacturer Laboratoires Vivacy invited 40 aesthetic practitioners to the Fer à Moulin School of Surgery in Paris for live anatomy dissections and hands-on classes to help them learn about and avoid complications during facial injections.

Delegates arrived by train the evening before the masterclass and upon arrival, enjoyed a French meal, networked and were introduced to the chairman of Vivacy, Waldemar Kita.

In an interview with Aesthetics, Kita described the company’s strong commitment for teaching and anatomical training and said that he was thrilled to invite UK practitioners to Vivacy’s home country.

Kita said, “After opening the Vivacy UK subsidiary in the UK just seven months ago, we are delighted to invite the first UK practitioners to Paris. It’s important that the practitioners using our products have the best practical and scientific training available and also understand the science behind how our products work alongside the anatomy.”

In his talk, Couchourel explained the science behind crosslinking HA dermal fillers and how Stylage products are characterised by unique combinations of viscosity, elasticity and cohesivity. Couchourel used an interesting analogy to explain crosslinking; he said, “HA crosslinking is like spaghetti and cheese. The spaghetti represents the HA chains, which you can easily pick up, until you add cheese. Cheese is the crosslinker, which clings to the spaghetti making it all stick together.”

Mr Kestemont then did a lecture on considerations for treating the mid-face, which was followed by Miss Winter who presented on the lips and perioral area. Professor Mojallal then discussed the lower face, illustrating how the ageing facial shape changes with time by showing several blurred images and getting the audience to guess how old they were. He also explained how the fat changes in the face with age, explaining that its behavior is different in the mid-face than the lower face, which he later pointed out in his cadaver masterclass. He also explained the importance of understanding the location of the facial ligaments, saying that filler must be placed in-between these landmarks.

Cadavers were then brought into the auditorium, and presenters individually spoke about different anatomical considerations while dissecting in front of the audience.

In the afternoon, the 40 delegates were split into four workshop groups to closely observe the speakers perform live dissections while they provided anatomy explanations and safety and injections tips. Delegates also had the opportunity to try new and different techniques using the Stylage products on the cadavers with the oversight of the teachers. Professor Mojallal led the nose dissection, Miss Winter explored the lower face and neck, Dr Kestemont showcased the upper face and labial region and Mr Ascher performed a power point presentation and dissection on the danger zones for volumising injections on the face and hands.

The training had a great response from delegates and many said it was among the best education they have ever had. Aesthetic practitioner Dr Dev Patel said, “This was one of the most satisfying training days I have attended in recent years. The morning consisted of lectures from four renowned French plastic surgeons and anatomists and I hung on to their every word. I enjoyed a superb refresher of facial anatomy with a handful of priceless nuggets to take away and undoubtedly influence my aesthetic practice for the better.”

Dr Patel added, “One key and interesting learning point was the difference in facial fat between the upper/mid-face and the lower face/neck, which explained a lot in regards to the visible differences we see with ageing in these two areas. My 24 hours in Paris – courtesy of the Vivacy team – will allow my injectable practice to be a bit safer and perhaps lead to better aesthetic outcomes. An invaluable trip to the French capital!”

Nadal said following the event, “We are thrilled that delegates have said that they have all learnt something new and that the training was to such a high standard. Training is so important to us at Vivacy and we invest a lot in training. It was very special to have our four anatomical experts here today, as they are so popular and well known in France that you can never get them in one place, so it was a real treat for delegates.”

Mr Ascher added, “Today went very well and it was great to meet practitioners from the UK. There is nothing more important than anatomy knowledge when it comes to dermal filler and botulinum injections, not only for safety but also for best aesthetic outcomes. Anatomy training is at the forefront of international conferences such as the upcoming IMCAS on January 30-February 1, of which I am the founder of, and I am looking forward to teaching more delegates the importance of this crucial area in the future.”

Nadal stated that Vivacy plans on inviting more practitioners to Paris and will continue to host education in the UK. The company is also investing in new product developments to address intimate area concerns for both men and women, which will be an exciting development, according to Kita.