New data suggests cosmetic procedures in Britain has risen by 13%

The annual audit released by the British Association of Aesthetic Plastic Surgeons (BAAPS) suggests a ‘record number’ of Britons underwent cosmetic surgery in 2015. 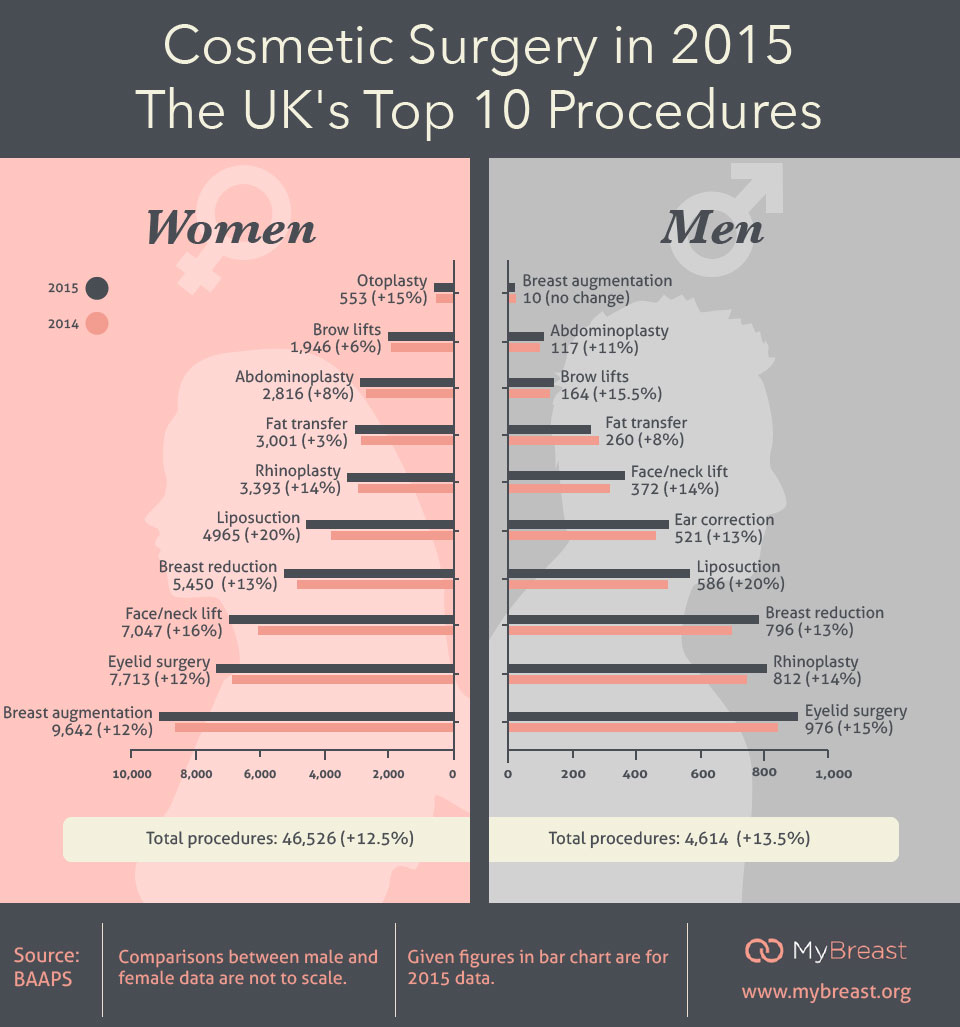 The annual audit released by the British Association of Aesthetic Plastic Surgeons (BAAPS) suggests a ‘record number’ of Britons underwent cosmetic surgery in 2015.

The data, collected by BAAPS, states that 51,000 Britons underwent procedures last year. Women’s cosmetic surgery is said to have risen 12.5% from 2014, with breast augmentation remaining the most popular procedure, rising a further 12% from 2014.

A rise in men having cosmetic surgery is also noted in the report, with face/neck lifts climbing 14%, eyelid surgery up 15% and brow lifts 15.5%. The most significant rise in male cosmetic surgery was liposuction, which rose by 20% from the previous year.

The report suggests that a trend in celebrities openly confessing to having procedures could be helping to de-stigmatise cosmetic surgery and fuel growth.

Mr Rajiv Grover, consultant plastic surgeon and former president of BAAPS said, “The 2015 BAAPS audit has shown that demand for cosmetic surgery continues to increase following the quieter period in 2014 which mirrored the British economy."

He continued, "The double-digit rise in surgical procedures suggests that the public are choosing to spend on treatments with a proven track record, such as facelifts and liposuction, which remain as the gold standard for facial rejuvenation and body contouring. The plethora of new non-invasive methods for skin tightening and cellulite that are here today and gone tomorrow, often appear too good to be true and fail to make the cut.”

Consultant plastic surgeon and BAAPS president, Mr Micheal Cadier, added, “There’s no doubt that we are seeing an increase in demand for cosmetic surgery from both men and women. Whether this is inspired by celebrity culture and a recognition that the results of modern aesthetic procedures in the right hands can be subtle, natural-looking and attractive, what is most important is for patients to remember that surgery is on the whole life-changing and irreversible – far from a trivial ‘status symbol’ beauty treatment."

He continued, "The decision to undergo surgery must be well thought-out, with managed expectations, understanding the risks through fully informed consent and, most importantly, choosing the right specialist provider who is properly trained and accredited.”