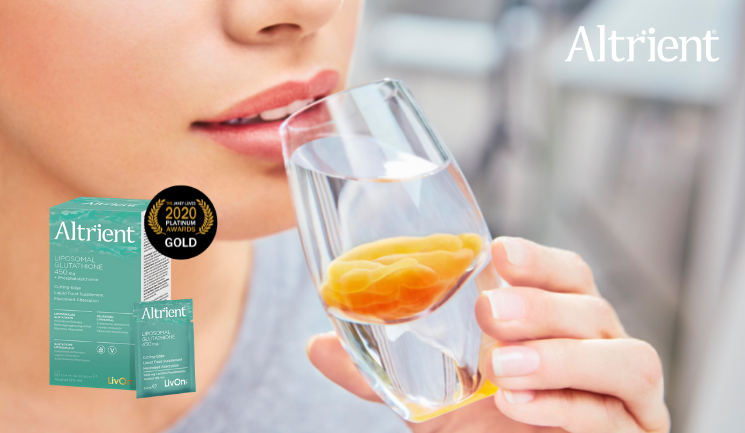 Award-winning Altrient Liposomal Glutathione has been hitting the headlines as the new must-have defence nutrient to add to your wellness arsenal in 2021 – it is also becoming increasingly popular with those looking to tackle skin pigmentation concerns.

Glutathione is a powerful cellular defence nutrient, made in the liver and found in every cell in the body. It is composed of 3 key amino acids, cysteine, glutamic acid and glycine.

Glutathione plays a role in a long list of biological processes and it has been found that extra glutathione intake interferes with the melanogenesis process (the biochemical process of melanin production) by reducing the skin pigmentation levels which helps to brighten dark spots and increase skin tone evenness.

Science shows that glutathione levels tend to decrease with age, chronic stress, chronic disease and poor diet. Levels may also be depleted by the overconsumption of alcohol, some medications or overexposure to some pollutants and toxins.

Unfortunately, the body’s need for glutathione is sometimes outpaced by its ability to produce it or obtain it from foods. Supplementing glutathione in a highly absorbable liposomal form such as Altrient helps to protect it as it travels through the digestive tract, getting it efficiently transported into the bloodstream and cells.