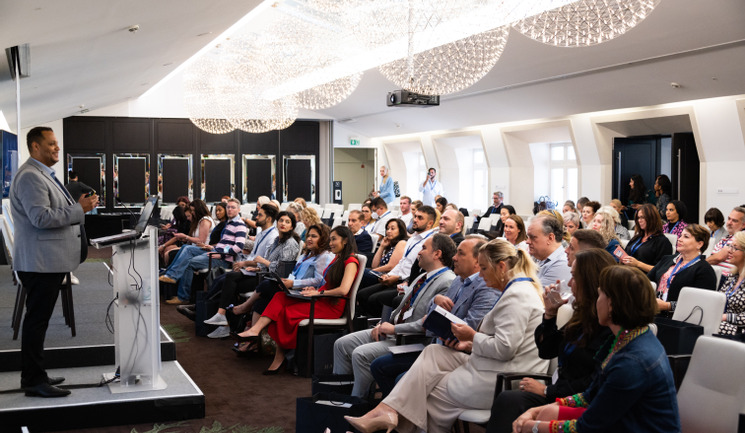 Over 150 medical professionals gathered at the Royal College of GPs in London for a Masterclass, providing an ‘In Real Life’ opportunity to learn about, and witness, treatment demonstrations of Sinclair Pharma’s newly launched, next generation dermal fillers for the first time. Delegates to the live event were party to an in-depth exploration of MaiLi – Sinclair’s ground-breaking, premium hyaluronic acid (HA) range and Lanluma - an injectable poly-L-lactic acid (PLLA) collagen stimulant which can be used for the body as well as the face.

The MaiLi innovation was introduced to Masterclass delegates by Professor of Plastic Surgery and specialist in Aesthetic Regenerative Medicine Ali Ghanem and Dermatologist Dr Ariel Haus who described the Swiss science behind this advanced product development. Professor Ghanem opined that “MaiLi is a new paradigm in the sector which hasn’t seen new innovation in some time” whilst Dr Haus added “We have been waiting and looking for something new and this heralds a new trend for less is more”. They were joined by Dr John Meadows who has a PhD in polymer and colloid science, to explain the chemistry (and alchemy) behind the world first ‘OxyfreeTM technology and Smart Spring Science “which enable both high projection capacity whilst at the same time remaining supremely supple.”

It was the projection power, elasticity and suppleness of the MaiLi gel which was the remit of surgeons Drs Priyanka Chadha and Lara Watson to explain in more detail. They answered the questions “How we get the best possible outcomes by using the least possible amount of product, and how can we ensure lasting effects and a natural look?” by describing the “Outstanding rheological properties of the gel which responds to the dynamism of the face”. They presented the clinical evidence of MaiLi’s efficacy and safety from a number of studies and concluded that “We have not seen results like this before - this is unprecedented… we are on the cusp of the dawn of a new generation of dermal fillers”.

Five MaiLi early adopters then shared their early experiences of treating patients with MaiLi; Drs Sabika Karim, Sheila Nguyen, Rita Poddar, MJ Rowland-Warmann and Dr Olha Vorodyukhina, each presented a case study and opened the floor to questions about their treatment protocols and outcomes. Rarely have so many positive comments been voiced about a new product as those expressed during this Masterclass session and all were of the opinion that this new filler has fast become their singular HA filler of choice for its efficacy, versatility and ease of use.

After a deep dive into the science, the doctors took to the stage to explain the anatomical knowledge needed to treat three areas of the face with MaiLi, whilst live treatment demonstrations brought the many product differentiators to life. Doctors Victoria Manning and MJ Rowland-Warmann showcased the MaiLi Precise version of the product for lip enhancement. MaiLi Precise was also used for a tear trough* correction performed by Drs Priyanka Chadha and Lara Watson, whilst MaiLi Extreme was the version of choice for a jawline contouring demonstration by Drs Ariel Haus and Charlotte Woodward. The range also includes MaiLi Define to fill deep wrinkles while maintaining dynamic expression and MaiLi Volume, a versatile volumiser for supple fullness.

This new HA filler range also have the versatility and scope to be used as part of a combined approach to redress a number of wider anatomical and aging issues rather than just focusing on isolated treatment areas. So the next part of the Masterclass was dedicated to showing how MaiLi combines** well with two Sinclair stablemates - Ellanse and Silhouette Soft. These new treatment protocols were explored by Professor Ali Ghanem, and Drs Victoria Manning and Charlotte Woodward who demonstrated how to achieve the best outcomes by adopting a combined approach. During this, Dr Manning also gave a sneak preview of a new skin laxity scale and Silhouette Soft measurement assessment gauge which is to be introduced by the company later in the year.

The final session of the Masterclass was dedicated to exploring the potential of Sinclair’s second new introduction, Lanluma, which is a revolutionary collagen stimulating dermal filler suitable to treat both the body and the face. The next generation bio-stimulator has the capacity to volumise, sculpt and rejuvenate large body areas - including the buttocks, thighs upper arms, hands and décolletage, as well as addressing the intransigent issue of cellulite and improving skin quality.

Professor Ghanem returned to the rostrum to take a deep dive into the anatomy of the buttocks and was joined by Dr Sabika Karim who shared some of the first case studies she has treated with Lanluma, before performing a live buttock augmentation treatment demonstration, and answering questions about how the product performs and should be applied.

The success of the live Masterclass underlined the thirst for personal contact as well as the new products, and delegates were left in no doubt about the excitement and enthusiasm for Sinclair Pharma’s new portfolio heroes. For more information, please visit: https://www.sinclairpharma.com

*MaiLi Precise is reserved to specialists specifically trained in the injection technique and who have sound knowledge of the anatomy and physiology of this periorbital area.
**The Combination use of these products has not been formally established.