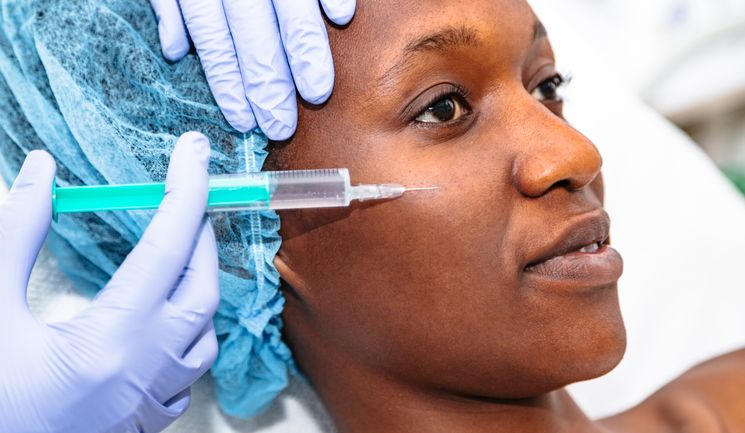 Complications caused by filler injections are generally categorised by their timing from when the initial injection took place. A complication which occurs within days post treatment will be classed as an early event, whereas a delayed reaction will be classified as an event that occurs weeks to years post injection.1

The variation between aetiology and clinical presentations can make delayed onset nodules (DONs) more challenging to address or prevent.2 A DON is described in the literature as a palpable or visible unintended mass that occurs close to or at the injection site of dermal filler. It may appear weeks or even years after the initial treatment.3 Once identified by the practitioner, a DON can then be further categorised as inflammatory or non-inflammatory. An inflammatory nodule may be characterised by pain, tenderness, swelling, heat and erythema.4

Even though DONs remain a rare complication, they are now being recognised more often. A four year retrospective study published in 2006 of 4,320 filler treatments found only a 0.6-0.8% incidence in hypersensitivity reactions; 5 however, a more recent study in 2019 found that of 1,250 patients receiving filler treatment the incidence of DONs were 1.0%.6

There is a lack of robust evidence as to which patients are more susceptible to DONs, but occurrence appears to be more common in immune reactive patients.7 As such, it would be reasonable to exercise a particularly cautious approach in treating a patient with an active autoimmune disease. Increasing evidence is emerging that shows a link between cold and flu viruses and the onset of delayed hypersensitive reactions, with some studies pointing to a rise in reported reactions in the autumn and winter ‘flu season’.8,9

It is important for practitioners to be aware of the possibility for DONs to occur and to be able to proficiently deal with the complication should it arise in their practice. It is also important to be able to inform and educate patients of any possible complications prior to treatment.

My patient was a 50-year-old female, who had not previously had any non-surgical procedures. She came to see me concerned about sagging to the jowl area and loss of volume in the mid-face. My patient was fit and well, only taking hormone replacement therapy medication. Following on from her initial consultation we planned to inject 1ml of a 20mg/ml hyaluronic acid, high G-prime, high cohesivity filler into each cheek in order to support the mid-face, increase volume to the area and begin to improve the ‘sag’ of the jowl area.

On the day of the procedure the patient’s skin was cleaned with Clinisept+ and a sterile wound care procedure pack was used. No topical anaesthetic was used on the skin and the hyaluronic acid filler contained Lidocaine. I injected the hyaluronic acid filler following the MD Codes technique. I injected each cheek with 3x0.1ml boluses to periosteum to CK1 with a 27 gauge needle, 0.3ml bolus to periosteum at CK3, followed by 0.5ml via a 25 gauge cannula to the deep dermis at CK3 using a fanning technique. The treatment presented no immediate issues and the patient was happy with the results. The patient was given standard post-procedure advice which included not touching/massaging the treated area, avoiding extreme heat/cold, vigorous exercise, avoiding make-up use for 24 hours and avoiding alcohol for 48 hours. The patient reported that she followed the aftercare advice.

The patient returned eight weeks later requesting further treatment. Her previous filler had settled well and she liked the increased volume to the mid-face area, requesting a further 0.5ml of hyaluronic acid filler to each side. Again, the MD Codes technique was used and a bolus to periosteum of 0.3ml of the same hyaluronic acid filler was injected to periosteum via a 27 gauge needle at CK3, 0.2ml bolus to periosteum at CK2. Once again, the patient experienced good results.

Four months after the initial treatment I was contacted by the patient to say she had developed swellings in the mid-face area, so I asked her to attend the clinic for a review.

In this consultation, it is important to look at the patient holistically by conducting a physical examination and taking a full history. You should ask them questions such as whether there had been any illness leading up to the event, if there had been any changes in medication or if they had undergone any surgery. It would also be wise to enquire if the patient had seen another practitioner following her initial treatment with yourself and had any further aesthetic treatments that you may not be aware of. The patient did not report any changes to their medical history, nor any periods of illness prior to the nodules appearing, although reported a period of increased stress in her personal life, which was unlikely to be related in this case.

When examining the face, check for a normal barrier function or any skin problems in the area. There was a 4cm smooth palpable mass to the patient’s left cheek and a smaller 2cm smooth mass to the right cheek. Both cheeks were tender to touch, but no erythema was seen and no heat could be felt in the area. The nodules were not visible to the eye but the patient reported feeling self-conscious and was concerned that other people may be able to see them.

Treatment options were discussed in detail, including the possibility of dissolving the filler, however the patient had been really happy with her results prior to this and so was keen to try to rectify the nodules without doing so. It was agreed that the plan would be to try to reduce them using a combination of treatments, but I could not rule out having to dissolve them in the future, so we agreed to review progress on a regular basis. If the nodules had been non-inflammatory then the suggested course of action would have been to watch and wait if they were not troublesome to the patient, or to dissolve using hyaluronidase if they were of concern.2

Initially, Clarithromycin 500mg twice per day was prescribed to the patient for two weeks. The antibiotics were prescribed according to the Aesthetic Complications Expert (ACE) Group guidelines3 and their use as a first-line treatment is also recommended in a 2020 study on delayed onset inflammatory nodules.2 A further study carried out in 2009 supports the use of antibiotics as a first-line treatment for DONs. The study observed 55 patient reactions to polyacrylamide gels, thought to be caused by low virulence bacteria, and those patients who received steroids or non-steroidal anti-inflammatory as a first-line treatment, rather than antibiotics, had a significantly worse prognosis in comparison to the group where antibiotics were used in the first instance.11

I kept in contact with the patient regularly and reviewed her face-to-face at two weeks following her completion of the prescribed antibiotics. The nodules had dramatically reduced and were 2cm on the left side and 1cm on the right side. There was no erythema or heat but some tenderness remained. I then prescribed prednisolone 40mg once a day for seven days, reducing by 5mg per day for a further seven days to reduce the nodules further. The use of steroids to reduce inflammatory conditions are well documented in traditional medicine, however in aesthetic medicine appear to be more at the discretion of the prescribing practitioner and are not documented in the ACE guideline algorithm for treatment of DONs,3 ­although several studies support their use in successfully resolving inflammatory nodules.2,9

This is an example of successful management of DONs without the use of hyaluronidase. It’s widely accepted that delayed inflammatory nodules have infection as their underlying cause and first-line treatment with antibiotics is considered best practice. Practitioner variations will follow in further treatment and is best practised on a case-by-case basis but treatment with steroids, non-steroidal anti-inflammatories and hyaluronidase are all supported as successful treatment options within the literature.