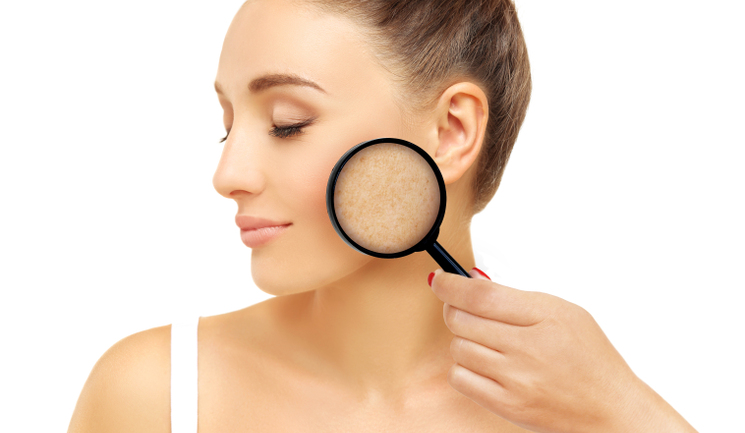 The effects of diet on skin is a controversial subject due to a lack of strong evidence justifying this as an effective element in dermatology treatment.

However, there is growing support for multi-disciplinary approaches to the management of skin disease due to evidence of higher success and faster discharge rates.1,2 This approach is something I incorporate into my daily practice. In this article, I discuss the benefits of combining dietary and oral/ topical preparations in management of four endocrine-induced skin conditions: acne vulgaris, hirsutism, menopausal skin ageing and female pattern hair loss (FPHL).

Such dermatology conditions may cause psychological disruption to sufferers, resulting in feelings of shame, humiliation and depression.3,4 One study reported that 5.6% of acne vulgaris patients have suicidal ideation.3 There is also evidence that diet may influence hormonal homeostasis in those who are experiencing these skin conditions, imparting skin and hair changes. Diet as a management tool may be used in conjunction with appropriate oral or topical preparations to help accelerate symptom control. 5-16

There is evidence to suggest that acne vulgaris is very common in western populations, with statistics showing that 79-95% of adolescents of both sexes are affected, and 40-54% of women and men aged over 25 years.5 Acne is caused when sebaceous glands become widened due to androgen targeting, stimulating prolific sebum production.17 This often commences during adolescence when the production of the sex hormone precursor dehydroepiandrosterone sulphate by the adrenal glands is heightened. There is some data supporting presence of higher androgen-receptor sensitivity and density in acne-prone skin.5-7

Acne is less common amongst Asian populations, thought to be due not only to genetic factors, but also the dairy-driven western diet in comparison to low dairy consumption seen in Asian countries.7 Evidence suggests that daily consumption of two glasses of full fat or skimmed milk leads to significantly greater glycaemic index (GI) and glycaemic load (P = .022 and P = .001, respectively), in patients with acne compared to controls, whilst a low body mass index (BMI) and eating fish three times weekly appears to exert a protective effect.8

Eating low GI foods and avoiding processed sugars may therefore reduce acne flares in patients with and without concurrent PCOS,10,19,20 and one study showed that women with elevated IGF-1 levels are more likely to experience acne compared to men.19 I use an indepth consultation with acne patients to identify possible dietary issues alongside first-line topical preparations.

Isoflavones contain antioxidant and antifungal properties. Soybeans have four chemical types; aglycone, glucosides, acetyl glucosides and aminoglycosides, containing the three isoflavones daidzein, genistein and glycitein. Soybean isoflavone foods can be eaten in the fermented form; miso, tempeh, natto, soy sauce for instance or non-fermented; soy milk, tofu, soybean sprouts. There is insufficient evidence to support that soy products negatively affect hormone function in men and women22 and some studies have shown that soy exerts positive effects on oxidative stress, cholesterol and bone density in men and post-menopausal women.23,24 Some of these foods can exert an additional probiotic effect.25

Mild to moderate androgen abnormality and PCOS is associated with approximately 65% of hirsutism cases, where prolific hair growth can commonly be seen on the upper lip, chin, chest and areola in female patients.5 It is thought to occur largely due to hair follicle hyper-sensitivity to androgens, enlarging dermal papillae and altering duration of hair growth during adolescence, often increasing with age.26 It is reported that 20% of cases are idiopathic, characterised by prevalence of dihydrotestosterone (DHT) induced thickened hair growing on androgen-sensitive skin parts.25 Similar to acne in its signalling and pathways, hirsutism often occurs as a result of insulin-induced IGF1 release, and subsequently lowers sex hormone-binding globulin, increasing levels of circulating testosterone.14

A weight loss programme combined with oral metformin to stabilise insulin, the combined contraceptive pill and, in some cases, spironolactone can improve PCOS and reduce symptoms of hirsutism by reducing androgen levels.27,28 As an adjuvant therapy, there are some dietary elements which I include for my hirsutism patients. One small scale study found that women who drank spearmint tea twice daily for five days had decreased free testosterone levels and increased serum levels of luteinising and follicle-stimulating hormones as well as estradiol.29 As there is some evidence to suggest that dietary soy-phytoestrogens reduce plasma testosterone levels by approximately 50%,15 I would also recommend inclusion of these food groups and reduced sugar intake in my patient group. Yams, lentils, alfalfa and mung beans, flax, sunflower and sesame seeds are also good phytoestrogen sources.30

Skin changes leading to ageing are accelerated during the peri and menopausal years due to a decline in oestrogen and progesterone receptors residing in dermal fibroblasts and epidermal keratinocytes.31,32 This can lead to skin thinning, loss of elasticity and increased wrinkle formation.32 Additionally, this reduction in oestrogen receptors can cause lengthening of the anagen phase of hair growth, which can lead to frontal fibrosing alopecia in the post-menopause period.33 The cutaneous changes we see in skin at peri and postmenopausal stages are largely due to extensive decline in alpha (ERa) and beta (ERb) oestrogen receptors, leading to reduction in stromal collagen synthesis. Hormonal supplementation may reverse these changes; however, hormone replacement therapy poses certain risks and is not for everyone, so alternative options are important in symptom management.34 ERas are limited to the dermis, whereas ERbs are spread throughout the dermis, around hair follicle bulbs and the epidermis.13 One study showed that the isoflavone genistein acts as a selective oestrogen receptor modulator (SERM), binding to and reactivating ERb proliferation, suggesting it may have a beneficial effect in decelerating ageing by restoring epidermal thickness through collagen synthesis.35

Another human study provided evidence that even in low doses, oral genistein is able to disrupt IGF1 pathways, exerting a protective effect on dermal fibroblasts to prevent oxidative stress-induced collagen biosynthesis inhibition.16 Another trial compared effects of application of topical oestrogen with isoflavone in post-menopausal women, and showed that oestrogen leads to higher epidermal thickening and increases in fibroblast and dermal papillae number compared to topical isoflavone therapy.36 Dietary fermented aglyconerich soy foods are absorbed faster and in greater amounts compared to glucoside rich soy in postmenopausal Japanese women.37 The beneficial effects of genistein on menopausal features can be achieved at a specific dosage of 54 mg/day.13 To my knowledge, there are no reputable facial oestrogen skincare products on the market, however the protective, moisturising and anti-inflammatory benefits of flavonoids, curcuminoids, niacinamides and peptides found in polyphenols are being increasingly explored36 and ceramides help to restore skin barrier function,38 making these elements my go-to recommendations to help restore elasticity and hydration. Based on research, I also supply dietary information, focusing on aglycone genisteins (fermented forms), plus supplementation of 54mg daily, for patients at all stages of their menopausal phase.13,37 Minoxidil 5% foam is generally the treatment of choice in menopausal female pattern hair loss,39 although in my experience there is often poor treatment adherence. Studies have reported variable success rates in treatment of FPHL with hormone replacement therapy; oral finasteride yields better results.40-42 Decreasing androgen secretion and thereby circulating testosterone has a positive effect on hair regrowth,39 suggesting that isoflavone ingestion through diet or supplementation may reduce hair loss. There is insufficient evidence to support relying solely on diet and supplementation.

A note about pro and prebiotics

Dermatologists Dr John Stokes and Dr Donald Pillsbury hypothesised 70 years ago that the emotional state of a person (such as depression, worry and anxiety) will affect gut micro flora by causing small intestine bacteria overgrowth (SIBO) contributing to skin imbalance.43-45 Findings from one study suggest that lactobacillus paracasei therapy inhibits substance P-induced inflammation.44 Including fermented milk drinks such as kefir in your diet or quality symbiotic supplement therapy could therefore help to break the mind-gut-skin cycle in endocrinal skin conditions. For those patients experiencing teenage or adult acne, I would recommend kefir derived from coconut or soy milk for reasons discussed previously.5,46

Adopting a low GI diet with reduced dairy intake for acne vulgaris sufferers, and a diet rich in phytoestrogens in all patient groups discussed here could speed up symptom resolution, but should be used in conjunction with traditional approaches rather than in isolation. In menopausal skin, diet and skincare combined may improve elasticity and reduce surface wrinkles. Probiotics may have a role in balancing gut micro-flora and reducing skin inflammation.