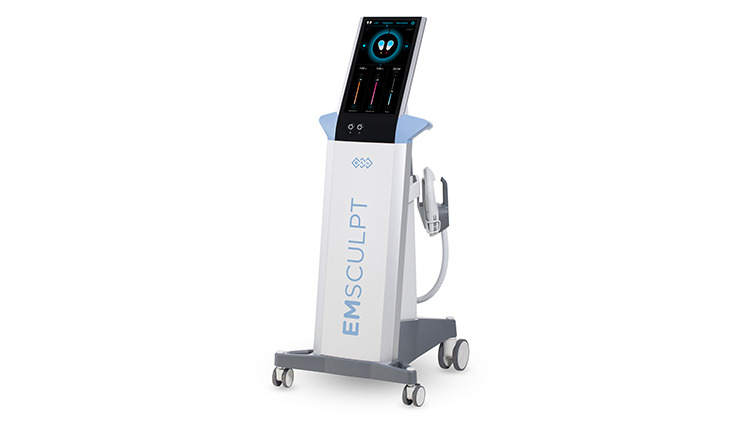 As a practitioner, it is not uncommon for a patient to come into your clinic and say, ‘I want a toned tummy’ or ‘I’d like a more lifted, perkier bottom’. And whilst fat reduction and skin laxity treatments may well be something you can offer, the toning of the muscles may prove difficult to achieve due to the lack of technology available. Last month, however, saw the launch of the world’s only non-invasive device that aims to simultaneously build muscle and reduce fat on both the abdominal area and the buttocks; the EMsculpt.

According to manufacturer BTL Aesthetics, the EMsculpt was developed after the technology was shown to have positive results for treating sports’ teams for muscle regeneration.1

Dr Rosh Ravindran, one of four practitioners in the UK chosen to trial the device before its launch explains, “The technology only acts upon striated muscle hence why there’s no impact on the bladder or bowels because they’re smooth muscle.” According to the manufacturer, HIFEM technology is also non-ionising, non-radiating, non-thermal and does not affect sensory nerves as it is designed to only stimulate motor neurons.2

By activating the supramaximal contractions, hyperplasia and hypertrophy of the muscles takes place. The voluntary contractions cause an adrenaline release, which signals the fat cells to initiate lipolysis (the breakdown of fats).1 The rapid stimulation is excessive, and the free fatty acids start over-accumulating in the fat cells; this overflow causes cell dysfunction and the start of apoptosis (cell death).2

Research indicates that this technology can force approximately 20,000 muscle contractions per half an hour session, something which the body would not be able to do alone.2

Research indicates that this technology can force approximately 20,000 muscle contractions per half an hour session

A histological in-vivo study involved one EMsculpt treatment of two porcine models where changes were evaluated in programmed cell death of adipocytes.

UNEL assay was put in place to detect biochemical and haematological parameters and punch biopsy specimens of fat tissue and blood samples were taken before the treatment, after one hour and eight hours post treatment. Researchers noted, on average, a 92% increase in apoptotic levels in fat cells from 18.75% at baseline to 35.95% eight hours after one treatment. Blood analysis confirmed a rapid metabolic reaction after treatment as supporting evidence of changes in the subcutaneous fat; no safety risks were identified.4

The MRI scan study involved 22 patients who were treated with four 30 minute sessions and were evaluated through an MRI scan after two months. Researchers concluded that abdominal fat thickness was reduced on average by 18.6% or 4.3mm and abdominal muscle mass increased by 15.4%, partnered with a 10.4% average reduction in diastasis recti. There were no adverse events; however, several patients reported mild muscle fatigue which resolved within 12-48 hours.3 The ultrasound study, which evaluated 33 patients one month after receiving four 30 minute treatments showed an average of 19% reduction of fat. 21 out of 33 patients had greater than 15% fat reduction and there were no ‘non-responders’. There was also a 91% satisfaction rate and no complications were reported.9 Combined, all seven trials show an overall outcome of 19% reduction in subcutaneous abdominal fat, 16% increase in muscle mass, a 4.4mm reduction in thickness of subcutaneous abdominal fat and an average waist circumference reduction of 4.4cm.2

The EMsculpt has also been cleared by the US Food and Drug Administration for the improvement of abdominal tone and strengthening of the abdominal muscles and has obtained a CE mark for medical devices.10,11

Dr Ravindran says the positive clinical trial results were what sparked his interest in the device. He explains, “Data is hugely important to me when it comes to new treatments and devices. I want to see three things: safety, imaging and histology. The unique thing that I found about the EMsculpt trial results were that they were robust and consistent across all seven of the studies.”

So, how does this device work in practice and who would be the ‘perfect patient’? According to Dr Ravindran, this procedure can work for most patients, with the exception of those morbidly obese, pregnant or breastfeeding.

It is advised by the company that a protocol of four 30-minute treatment sessions over the course of a two-week period is suitable and best results will be seen after three months, with continued improvement over a six month time period.12 For the procedure itself, two Tesla magnetic paddles are secured to the targeted area by a fixation belt and the relevant setting is selected. Dr Rosh explains, “The settings go from 1-100 in intensity, for the buttocks you use two paddles and for the abdomen it is usually just one. This is reactionary for the practitioner based on the patients tolerance and is slowly increased.” Dr Rosh says that in his experience, the patients that achieve the best results are those with lower body fat. “For these patients you can see results straight away because there is less fat to target. However, if I had a patient with high body fat, they still get a result but it is more related to their circumferential waist reduction. I find that abdominal patients get immediate improvement, while usually, results are seen after the second and third treatment for the glutes. Sporty people may see it straight away because of previous muscle memory,” he explains.

In regards to pain after treatment, Dr Ravindran says that although patients have a higher muscular response than a typical gym workout, they feel it less. He explains, “You don’t get the lactic acid build up that you get from going to the gym where you can’t walk for a few days because EMsculpt has a different mechanism of action. I would say that after each treatment for the tummy, patients will feel an ache for around 48 hours and with the buttocks it is even less.” Dr Ravindran has not noted any complications but he emphasises that a detailed consultation is key to prevention. “

The technology is magnetic so you can’t have metal pacemakers of any kind in the body. I also personally prefer not to perform the treatment when women are on their period; there is already a lot of muscle contraction happening at this time so it could potentially increase bleeding, although this is not clinically proven,” he explains, adding, “I also prefer not to treat anyone until they are at least three months’ post-partum.” To summarise, Dr Ravindran says that he looking forward to seeing the results he can achieve in the future with the EMsculpt device. He says, “I believe it is the best in class and the first of its kind.”