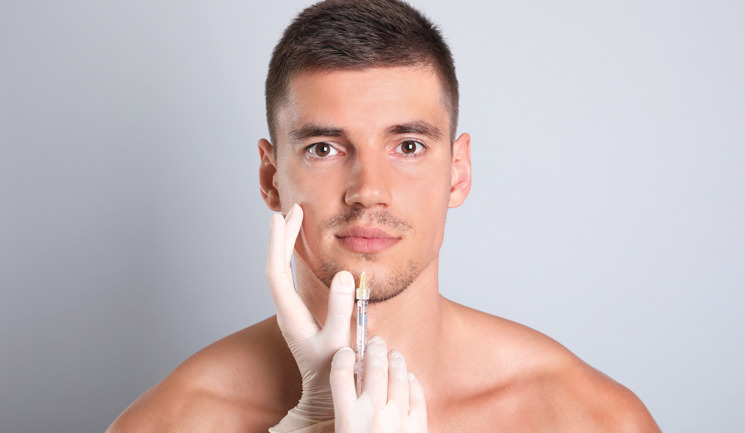 The goal for most men who turn to cosmetic treatments is to look well-rested, energised and ready for business.1 In my experience, typically those aged 40 and over prefer rejuvenating tweaks for reducing signs of weathering or tiredness, such as tear trough fillers for restoring hollow under-eyes, and anti-wrinkle injections for a softer-ridged brow. Personal tastes factor highly in terms of how many expression lines are desirable. For men in their 20s and 30s, alteration is more often the quest: understated yet effective solutions, usually with fillers, for helping to achieve stronger, more defined and masculine looks.

However, in recent months, I have noticed a discreet and steady shift among male patients – regardless of age or occupation – towards full-facial ‘refreshment’, as opposed to simply wanting to have ‘this or that’ done in isolation.

A 33-year-old Caucasian man presented to my clinic concerned with the absence of a defined jawline, which was clearly impacting his self-esteem. He’s highly visible on social media with a significant following – in fact, most people in his close social circle are models and media personalities and as a result, his photograph is taken regularly. This was making him very conscious of how lacking in structure his facial features appeared in pictures. He had never had cosmetic treatments before and after taking a full medical history there were no lifestyle factors of relevance. I deemed his concerns to be valid and was satisfied that his expectations were realistic.

I carefully assessed his face from different angles and we discussed in detail the features he found particularly bothersome, namely his lower face, taking a full-face approach and thus ensuring a balanced and proportional outcome was always in sight. I find it satisfying to analyse and interpret the different facial anatomical components together with my patients in this way and it became clear that what he was hoping to achieve was a straighter nose, more defined cheeks and, crucially, a stronger jawline supported by better chin projection.

The consultation process was aided by referencing his own photographs, the clinical pictures I took from front, oblique and side angles, and the use of a handheld mirror for helping him visualise my advice. I identified and noted the dorsal hump and drooping tip of the nose, the slight frontal asymmetry with curving towards the left, and a retrognathic chin with overall small mandible, meaning the absence of a defined jawline and chin.

My decided strategy was a deliberate but necessary slow progression towards the ‘goal’ through several sessions, because I find that high volume injections administered in one go don’t integrate well; there’s more control if you go slowly and steadily. I’m a firm believer in the maxim that the best results are achieved with a marathon, not a sprint.

We also discussed the effects of filler in different parts of the face, the potential risks and inevitable downtime, as well as the products I would use. I explained that the downtime can be negligible but swelling between weeks one and four is possible, and if there’s any bruising, it will last about a week. The patient was encouraged to ask questions and he was invited to contact me via email or WhatsApp if he wanted to know more or to follow-up on any details. For preparation, I advised him that it’s important to avoid drinking alcohol to excess because I find this can increase the risk of bruising. I gave him the necessary aftercare advice he would need to follow, including avoiding exercise and alcohol for two days following treatments; details that I repeated before and after each phase in the plan.

As I had already discussed this treatment in detail with the patient prior to this consultation they had already had sufficient time to consider the outcomes and risks. I therefore performed the treatment on the same day, but I would normally recommend a cooling-off period of a couple of weeks.

For the first round of treatments, I decided on performing a liquid rhinoplasty and starting the injections to address the mandibular angle, jawline and chin, as these were his primary concerns. When treating, it’s vital to take into consideration the different angles, shapes and projections that must be respected so as not to feminise the male face. The angle of the mandible, for example, tends to be closer to 90-100 degrees in men, whereas in women it’s more typically between 120-130 degrees.2 Similarly, careful consideration is needed when rotating the tip of the nose in men. The angle of the tip of the nose should be at around 90 degrees to the upper lip; rotating any more than this risks a more feminine ‘sloped’ appearance, something most are typically eager to avoid.2

Once I had signed informed consent and with some additional clinical photographs taken, my patient was invited to recline on the treatment bed. Invariably, patients are positioned at a 45-degree angle, which is comfortable for them and gives me ample access to the face.

I work under high lumen LED twin bar lights so I can also ensure that I’m never working in my own shadow, and because it facilitates assessment of light reflections on the face, which arguably allows for greater precision.

I began by disinfecting the area using a 10x10cm square gauze and Clinisept+ Skin, and then marked the nose in white pencil as well as the face along the mandibular border and the width of the chin in line with the corners of the mouth.

It’s vital to take into consideration the different angles, shapes and projections that must be respected so as not to feminise the male face

I carefully straightened the nose bridge by injecting Teosyal Ultra Deep over and around the rounded dorsum. Then I lifted the nose using the same product because of its G prime and projection capacity. I carefully placed injections in the tip and columella to rotate it upwards and improve the angle of the tip.

For the cheek, jawline and chin areas, I also started by using Teosyal Ultra Deep, administered using a 27 gauge needle for supraperiosteal injections, down to the bone. I prefer this method of injection for the chin as too much product injected superficially in this area can leave it looking somewhat overly rounded and obvious, making it look feminised or unnatural. Even at this early stage in the process, results could be seen straight away, something which is often quite astonishing for the patient and in this case clearly excited him in terms of what could be achieved over time.

For the second and third appointments (spaced six weeks apart due to the COVID-19 lockdown), I switched from Teosyal to Radiesse because it’s less hydrophilic, and in my experience, there’s more sharpness and less ‘roundness’ and swelling. I administered this with a 27 gauge needle supraperiosteally for extra deep volume and sharper projection. My focus during these sittings was chin balancing, projection and widening. Afterwards I began introducing anterior jawline cannula superficially on either side. During the third sitting I also addressed the pre-jowl dip, injected supraperiosteal again and the rest was done superficially once more using a cannula. I smoothened the dorsal hump in the nose by injecting the radix and middle of the bridge and performed a tip lift to improve the nasolabial angle by injecting small aliquots of filler on top of the ala major cartilage.

I also treated the lips during the second session, and a later fourth session, with 1ml of Belotero Intense, using a 27 gauge needle, targeting the lip tubercles for volume so as to optimise the eversion and side profile of the lips.

The patient experienced no side effects other than the expected swelling outlined above, and he was delighted with the added definition in his face. It was rewarding to see his confidence grow, something that was noticeable in his demeanour each time he arrived in clinic during the course of treatments.

As can be seen, he doesn’t look warped or unrecognisable, nor feminised or overinflated, just a more polished version of himself – a natural aesthetic that respects his individual anatomy. It was interesting to note that as the jawline looked more sculpted and defined, he chose to grow less facial hair because he was no longer subconsciously disguising a soft jawline.

With the male face, I’d argue that it’s even more important to deliver subtle and almost undetectable results because of the stigma attached to treatments. To successfully treat the male face, it’s all about respecting the sexual dimorphisms; for the female face, it’s about rounded curves but, in men, it’s all about high tight lines. The more we discuss facial anatomy with men in our clinics and explain the differences in the anatomy compared with women’s features, the more we will help increase their confidence in non-surgical tweaks. Doing so will also help break the stigmas about these treatments and demonstrate very clearly how we respect their masculinity. Communicating this at every available opportunity is extremely important.