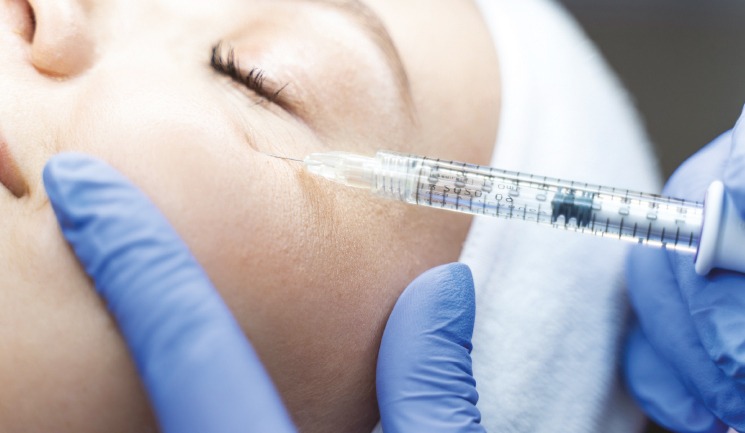 Our eyes tell stories. But as we grow older, people can often become less comfortable with their message. In the outer areas, the appearance of excess skin, dark circles, puffiness, wrinkles or recesses are signs to others that we’re looking tired, aged and lacklustre; even though that’s not how we feel inside.

‘Tired-looking eyes’ is the single biggest frustration that drives patients through my doors for the first time. And, in approximately two-thirds of these cases, the most bothersome region is the lower lid. But for the remaining third – still a sizeable number – the issue impacting their self-image is the upper eyelids, sometimes in combination with the lower.

The treatments I administer here will usually address flattened brows, upper eyelid hollows, A-frame deformities, eyelid asymmetries or folds in the upper eyelid crease caused by volume depletion. Where surgical intervention is indicated – soft tissue laxity or ptosis causing skin to droop on to the lashes, for example – referral to an oculoplastic surgeon is typically appropriate.

Concavity in the upper orbit is often genetic – I treat many 25-35-year-olds with this – or a natural and anatomical response to ageing due to diminishing soft tissue density and bone resorption in older recipients.1 The aim in both groups is to restore visible symmetry, youthful plumpness and tauter skin to the periorbital area.

My patient was a 57-year-old woman bothered by the droop in her brows and the obvious darkness and hollowness above her eyes. She asked me to assess her suitability for non-surgically rejuvenating the upper eyelid area so she could look fresher, more awake and less downcast in aspect. This was to be a finishing touch to an aesthetic journey, which included a facelift, separate lip lift and upper blepharoplasty procedures performed by other practitioners. A previous brow lift had come down again, if only slightly.

On assessment, I could immediately see that she was a good candidate for InclinEyes, a customisable, filler-only treatment I designed to enhance the eyebrow apex and subtly scoop and reposition drooping brow tails so that eyes appear more open and youthful. I also believed that she would benefit from toxin injections to smooth out her crow’s feet.

She had some hollowing medially and laterally of the temporal crest, which is typical with ageing. There was no obvious flatness above the apex of the brow; this was more prevalent on either side where the injections could be administered. I noted the slight volume deficit in her fat pads, indicating a lack of sufficient support for the skin below the brow rim. The quality of her skin was notably firm, smooth, hydrated and free of congestion or irregularities – all of which factor in a better result. She was particularly expressive in conversation and was in overall good health with no underlying issues to give concern.

In addition to reviewing her full medical history, I explained the effects of filler in the periorbital area, the products I would use, the injection sites and the technique. We also discussed potential risks, downtime and aftercare, which included avoiding alcohol and exercise for at least two days prior to, and following, the appointment.

The treatments were to be administered in the clinic on the same day. A bonus was that her extensive research, in relation to my own upper eyelid work – and her history of facial surgeries – meant she was very well informed. She listened intently and asked good questions and I was satisfied that, by also physically demonstrating for her what could be achieved above the eye and at the tail of the brow – a repositioning as opposed to a lift – her expectations were realistic.

In situations where this isn’t quite so evident, for example, if the patient expects a significant vertical lifting of the entire brow area or a reduction in the laxity of the upper eyelid skin, I recommend the patient takes more time to consider their options – generally a couple of weeks – or I will explain why I might decline treating at all. I also make it clear that my team or I can be contacted via email, WhatsApp or phone with any questions or concerns in the days and weeks that follow treatment.

Informed consent was given and the patient was guided to the studio area where the clinical photographs were taken. I ensure I get images from the front, oblique and side views. This area of the clinic includes studio directional lighting, voice-controlled shutoff of the lights during pictures and an automatic roller blind to block the window, ensuring that weather and time of day don’t affect the light – all of which helps ensure consistency in the clarity and angles of the pictures.

I positioned her at 45-degrees on the treatment bed; my preferred angle for working, giving me ample access, as well as being very comfortable for the patient. I work under high-lumen LED twin bar lights so I can see everything and never work in my own shadow.

After removing her makeup, I began by disinfecting the relevant areas of the upper third using a 10cm square gauze dampened with Clinisept+ Prep & Procedure. No anaesthetic was used because it’s a surprisingly painless treatment that can sometimes feel a little uncomfortable or unfamiliar at worst, and there’s also lidocaine in the dermal fillers used.

To increase the volume and improve the contour of the upper eyelid and the way it drapes in the superior sulcus, I chose Teoxane’s Teosyal RHA 1, a soft and fluid-consistency filler ideally suited for this delicate area. I administered 0.9ml of the product using a TSK STERiGLIDE 27 gauge 5cm cannula. I chose a cannula over a needle here as it will remain in the anatomical space and there’s no scope for accidental damage to the eyeball. It also limits the chance of other accidental bruising and injury. Despite some scarring in the area post-upper blepharoplasty, it wasn’t an issue. The cannula went in smoothly. Sometimes, an aggressive upper blepharoplasty can exaggerate hollowing, but that wasn’t the case here.

To gently restore the arches of her brows, I revolumised the fat pads to achieve a more open appearance. Then I repeated the process in the fat pads near the tail of the brow. The product was injected with a 30 gauge needle slowly and precisely in very small aliquots supraperiosteally, for which a needle is a superior instrument over a cannula in my opinion. This is because a needle will more easily pierce the different layers down to the bone. There was little variation on my usual InclinEyes technique, but I always customise according to the patient’s individual need. In this case, I treated the very anterior aspect of the temples right behind the orbital rim and inferior of the temporal crest. I selected Teoxane’s Teosyal RHA 3 and used 0.6ml overall. This product is more of a volumiser, yet is not too heavy and it integrates well.

Once the doses were in, I asked her to sit upright and look directly into my eyes. A steady horizontal gaze like this facilitates careful examination of how the eyelids are draping. I can also feel for any minor remaining volume shortfalls. I made some markings using a readily available white liquid eyeliner, with each dot indicating a point where extra volume was needed so that I could subtly adjust and further improve her result. I then treated those for an optimal outcome. I also lightly massaged the upper eyelid to help blend the filler into the area. The crow’s feet were then treated using botulinum toxin.

A good result was visible immediately and the patient was amazed by the improvement she got, commenting that it exceeded her expectations. The eyes appear brighter and now catch the light evenly along the periorbital rim thanks to that smoother and fuller curve, lending an altogether more youthful appearance.

A typical recovery from InclinEyes – likewise for upper eyelid fillers without the brow tail adjustment – is very straightforward. Patients can expect to experience some puffiness, particularly on day one after treatment, but it’s otherwise unproblematic if the aftercare advice is followed. This includes not applying any pressure to the area for a couple of weeks.

Bruising here is rare but if it does occur, it can be covered up easily. If bruising were to be more pronounced, it would present as a black eye. Filler in this area will take four-to-six weeks to fully integrate and settle. Usually, one treatment is enough and, depending on the individual, will last between 12 to 18 months. The longevity of the treatment will usually extend beyond this time following subsequent maintenance treatments. If a follow-up treatment is required, I don’t recommend adding further product in the upper eyelid area before six weeks so that the initial filler has fully integrated and settled.

It’s important in facial analysis not to neglect volume depletion in the upper eye – too often the upper eyelid and brow area is neglected. I’d argue that facial rejuvenation is never complete if a patient is left with hollow eyes, as sometimes we see after facelifts, for example. The treatments should be as safe as possible, both in relation to the techniques and instruments used, with results that look so natural the patient could be born with them. Using fillers adds an extra safety feature because they’re reversible.

Eyes are the very first thing we see when we look at someone and the first area to show signs of ageing because of the fine nature of the external skin. They’re vital for human connection and communication, and one of the most challenging areas to get right because there’s zero margin for error. For me, working in the eye area is the most professionally rewarding; the aesthetic impact and importance is unquestionable and, technically, it’s exacting to get right.