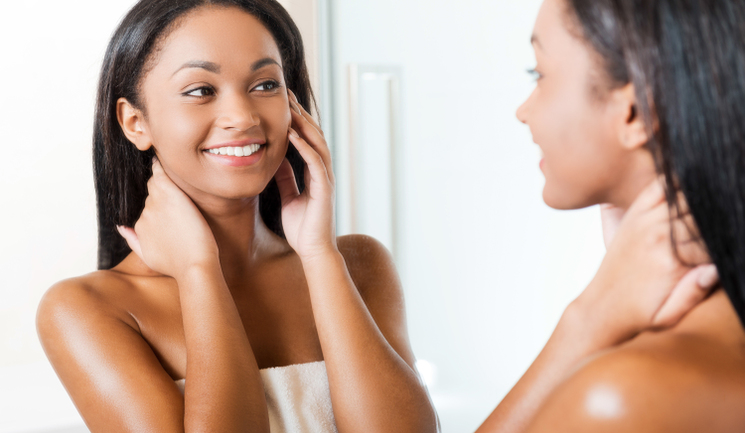 In previous years, it is fair to say there has been a lack of widespread acknowledgement of the vastly different skincare requirements in patients with skin of colour. Thus, the beauty and aesthetic industries alienated a huge proportion of their customer base. Thankfully, things have moved forward. From the high-street chemist to the high-end clinic, individuals with skin from Fitzpatrick phototypes I through to VI can access products and treatments for their individual concerns, which often vary greatly according to how dark their skin is.

“While we see certain conditions more commonly than others in people with skin of colour, it’s important to recognise that any skin complaint can affect any skin colour,” points out consultant dermatologist Dr Justine Kluk. “Recognition of skin conditions in skin of colour can be more difficult for clinicians who are only used to looking after individuals with white skin – and therein lies the first challenge,” she adds. In discussing dermatologic concerns in skin of colour, it can be helpful to use the Fitzpatrick skin phototype scale to classify patients’ skin. Dr Justine Hextall, also a consultant dermatologist, suggests that ‘skin of colour’ is usually categorised as Fitzpatrick types III to VI.

“There are notable differences in skin disease incidence, presentation, and treatment based on skin type,” Dr Hextall explains, noting, “This includes structural and functional differences in the skin and hair, for example. In darker skin, increased levels of melanin and larger melanosomes – but the same number of melanocytes – provide greater photoprotection, resulting in a lower incidence of skin cancers.”1

However, higher levels of melanin correlate with increased incidence of post-inflammatory hyperpigmentation (PIH), which epidemiological studies have shown occur more commonly in patients with skin of colour.2 Just like with pale skin, PIH in dark skin can develop as a result of any number of causes, including:3

PIH occurs when inflammation or damage to the skin results in increased production of melanin, which is what gives skin its colour. “In our skin, we have two main types of cells: keratinocytes and melanocytes, the latter being the pigment-producing cells,” explains Dr Kluk, adding, “In pigmentary conditions, melanocytes pass increased amounts of pigment to the other cells – the keratinocytes.” Thus, melanin synthesis is propagated.5 Aesthetic practitioner Dr Ifeoma Ejikeme attests that pigmentary conditions are particularly troubling for patients with skin of colour, not just because they are more common, but also because the pigmentation tends to be more pronounced and longer lasting.1 “The most concerning aspect is not necessarily the pigmentation itself, but how dark it is and how long it remains,” she says, adding that her experience has shown that, “In darker skin, the areas of hyperpigmentation can be present for anything from six weeks to four months.”

Another pigmentary condition that is more prevalent in darker skin2 – particularly Fitzpatrick phototypes IV to VI3 – is melasma, which occurs when the melanocytes in the skin produce too much melanin. While the exact reason why this happens is unknown, it is associated with increased exposure to the sun’s ultraviolet rays, and female hormone activity. The latter is evidenced by an increased incidence of melasma in pregnant women (hence, it is sometimes referred to as a ‘pregnancy mask’), and those taking oestrogen-containing medication, such as the contraceptive pill and hormone replacement therapy.7

Melasma presents as small freckle-like spots or larger brown patches, usually with symmetry and an irregular border, on the face. Dr Hextall points out that there are three main patterns of melasma:8

In patients with PIH, it’s crucial to ensure the cause of the inflammation is addressed in the first instance, according to Dr Hextall. She says, “There is no point in treating pigmentation if there is active acne, for example. Likewise with eczema, switching off the inflammation is crucial, as is finding suitable emollients to maintain the skin barrier and help to reduce recurrence.”

According to the practitioners interviewed, similar methods are used to treat both melasma and post-inflammatory hyperpigmentation, and the first-line treatment is typically a tyrosinase inhibitor. Tyrosinase is an enzyme produced by melanocyte cells, and is a crucial component in melanin synthesis. Consequently, by restricting the activity of tyrosinase, the skin makes less pigment,4 making tyrosinase inhibitors effective in combatting hyperpigmentation of many causes.

“Tyrosinase inhibitors include arbutin, oligopeptide 68, kojic acid and liquorice extracts,” says Dr Ejikeme, adding, “They vary in potency, but they’ve been shown to regulate pigment, they are safe, and they can be used on an ongoing basis.”2,9

Perhaps the most commonly used tyrosinase inhibitor is hydroquinone. It has been historically shrouded in controversy because of its association with the practice of skin lightening among some cultures that view lighter skin as more attractive.

“In some areas of Africa and Asia, where culturally there is sometimes a desire to have fairer skin, hydroquinone is often misused, and people obtain unregulated products on the black market where the dose is unknown,” comments Dr Kluk. Because of this, patients can sometimes be sceptical about the clinical use of hydroquinone, she notes. However, it is widely accepted that, when used with caution and under the supervision of a medically trained practitioner, it is both safe and effective in treating hyperpigmentation, such as PIH and melasma. This is typically a topical preparation containing 2-4% hydroquinone, applied to the affected skin daily for up to four months. Prolonged use can, paradoxically, worsen hyperpigmentation.8

Improved results are often achieved when hydroquinone is used in combination with other ingredients, such as retinoids, antioxidants, glycolic acid and – most importantly – broad-spectrum sunscreen.10 The exact formulation and dose of these ingredients vary between products and have different modes of action in tackling pigmentation.

Retinoids (vitamin A) work by increasing cell turnover, explains Dr Kluk. “Our skin is always renewing itself; new skin cells are forming, and old cells are lost from the surface,” she says, explaining, “If you increase cell turnover, the contact time between melanocytes and keratinocytes is shorter, so there is less time for the melanocytes to pass their pigment on to the other cells.” Consequently, the proliferation of pigmentation is reduced, she notes.11

Since retinoids can be irritating to the skin,5 Dr Kluk often suggests patients begin with an over-the-counter topical retinoid, since these contain lower-strength retinoids (typically retinol), which tend to be better tolerated. “If a milder formulation doesn’t help, I would move a patient on to prescription-strength retinoid [tretinoin], since the magnitude of benefit one would expect would be greater,” she says.

Antioxidants, namely L-ascorbic acid (vitamin C), have a depigmenting effect by interrupting the key steps of melanogenesis and inhibiting tyrosinase action, resulting in reduced melanin formation.6 L-ascorbic acid also reduces oxidative stress, and has been shown to have anti-inflammatory and photoprotective properties.2

Glycolic acid can be effective in treating hyperpigmentation due to its exfoliant effects; it gradually penetrates the uppermost layer of the epidermis and ‘peels away’ skin, including superficial pigmentation patches and dark marks.14

Aesthetic practitioner Dr Amiee Vyas, who has special interest in dermatology, highlights that chemical peels can be effective as a second-line treatment for melasma and PIH. “In conjunction with topicals, I find a course of chemical peels with mandelic and glycolic acid, done with adequate preparation, starting at low strengths and then at regular intervals with a step-wise increase in strength, gives best results,” she says.

Chemical peeling agents carry a risk of prolonged hyperpigmentation in Fitzpatrick skin types IV and above and should be used with caution, but some studies have found that peels using a combination of salicylic and mandelic acid are more effective and less likely to yield side effects than glycolic acid peels.15,7

Other skin conditions frequently seen in skin of colour relate to the hair follicles. A particularly prevalent complaint, especially in black skin, is pseudofolliculitis – inflammation caused by irritation secondary to the way in which hair regrows – owing to the thick, coarse and coily properties of African hair.8

“I see this a lot and it’s certainly more common in skin of colour, but it can affect anyone who has curly, thick hair – even Fitzpatrick skin types IV and V,” comments Dr Ejikeme, adding, “A type of folliculitis that is very common in men with skin of colour is pseudofolliculitis barbae, where ingrown hairs lead to chronic inflammation, pigmentation and scarring in the beard area.” She explains that pseudofolliculitis can also affect darker-skinned women with thick, curly hair, in the groin and underarm region.

In both cases, the condition develops after shaving (or other forms of hair removal), where the hair has difficulty coming through to the skin’s surface due to its wiriness; when it penetrates the skin, it grows back inwards, causing inflammation.17 “This commonly results in a cycle of infection, papules and pustules, inflammation and pigmentation,” Dr Ejikeme adds.

Some follicular skin conditions can be caused by certain beauty practises – such as straightening of afro hair with chemicals, traction or heat – leading to scarring (or cicatricial) alopecia. The most prevalent subtype of scarring alopecia is central centrifugal cicatricial alopecia (CCCA), where hair loss begins in the mid-scalp and extends outwards, is progressive, and – left untreated – can be permanent.9

The Skin of Color Society states that, “Though previously thought to be solely related to the use of hot combs, excessive heat and hot oils on the scalp, chemical relaxers, and excessive tension from braids, tight hair rollers, weaves or extensions, the current thought also points to heredity (family history) playing a role.”19

Scarring alopecia treatment is aimed at halting the progression of hair loss, and tends to be limited to anti-inflammatories such as topical corticosteroids, hydroxychloroquine, and the immunosuppressants tacrolimus and ciclosporin.10 “For dermatologic conditions secondary to cultural practises I find patient education will usually resolve concerns, once the practice is stopped,” comments Dr Vyas.

Successful treatment of pseudofolliculitis can be difficult, but it will usually subside when the patient stops shaving (or whatever hair removal method they use). However, this is not an option for many people.17 “The definitive treatment of choice, and the only cure for the problem, is to remove the hair permanently, usually with lasers or electrolysis,” says Dr Ejikeme. A number of different types of lasers have been demonstrated to be effective in treating pseudofolliculitis (including pseudofolliculitis barbae), among them long-pulsed neodymium: yttrium aluminium garnet (ND:Yag)18 and pulsed infrared lasers.20

One of the challenges in treating pigmentation in darker skin, Dr Kluk points out, is restricting the treatment to the abnormally pigmented skin without affecting normal skin. “The way pigment lasers work in hair removal, for example, is by targeting pigment in the hair follicle, which is different in colour to the skin,” she says. “It can be very difficult to differentiate between the different shades when treating hyperpigmentation in skin of colour and there is a higher risk of pigmentation worsening as a result of laser treatment.” In fact, hypopigmentation, as well as hyperpigmentation, is a potential side effect of lasers.21

The most important advice to give to patients is to include a broad-spectrum sunscreen as part of their daily skincare routine, and that is no different for patients with skin of colour. People with dark skin are sometimes under the false impression that they don’t need to use sunscreen because they rarely burn. However, darkening of the skin after exposure to sunlight – which can affect even Fitzpatrick skin types V and VI – is a sign of UV-induced DNA damage.22

The Skin Cancer Foundation suggests micro-ionised physical sunscreen for people with darker skin to avoid the chalky-white appearance, or chemical sunscreen with SPF 15 or above.23

Generally, patients with skin of colour are becoming wiser to the most effective treatment methods, thanks largely to resources like The Black Skin Directory, whose aim is ‘connecting women of colour with expert skincare professionals’.24

As Dr Hextall summarises, the result is that, “With accurate diagnosis and a treatment plan that carefully considers the risk, particularly of post-inflammatory hyperpigmentation, there is no reason this group cannot have safe and successful aesthetic treatments.”